We last looked at the Gamo Whisper on November 11. At the end of that report, I mentioned a HUGE surprise. Well, this isn’t it.

So many of you raved about the GRT III trigger from Charlie da Tuna that I had to try it. I really like the Whisper, as I’ve said many times. It’s light, easy to cock, accurate and priced right. Anything that makes it better is good in my book.

This is a different rifle than the one I tested in the first five reports, so I will be cleaning the barrel and going through all the other make-ready preparations once again. But, before I do, I want to report on the installation and operation of this aftermarket trigger. The purpose of the GRT III trigger, as it is known, is to lighten the trigger-pull and make the trigger more adjustable. Because many Gamo rifles come with the same trigger, as well as many more Chinese rifles that also use a copy of the Gamo trigger, this one unit, which is really nothing more than a replacement blade, fits a long list of popular models.

Testing the Gamo factory trigger
By a strange coincidence, the factory trigger in this Whisper is the best Gamo trigger I’ve ever evaluated – BY FAR! It has a definite first and second stage and stage two releases without a hint of creep. It’s also quite short for a Gamo. It breaks at 4-4.25 lbs. repeatedly and is just a very nice trigger. Oh, it’s not going to challenge a Rekord anytime soon, but most shooters would like it. Charlie has his work cut out for him.

Disassembly
The action must be removed from the stock, and that’s when I ran into a surprising obstacle. Gamo now uses Torx fasteners to hold their rifles together! I own a Ford pickup truck, so I own a Torx driver set, but I bet this will catch a lot of hobby airgunsmiths by surprise. Allen wrenches and Phillips screwdrivers do not fit the Torx sockets properly; you need the right tools. I was angry when Ford forced me to buy the driver set, but today it saved my bacon. 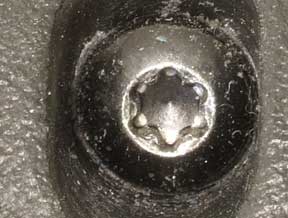 All the Whisper stock fasteners are Torx. 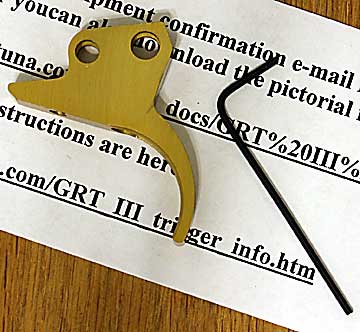 The GRT III trigger consists of just a trigger blade. Clever shape is what makes the difference. 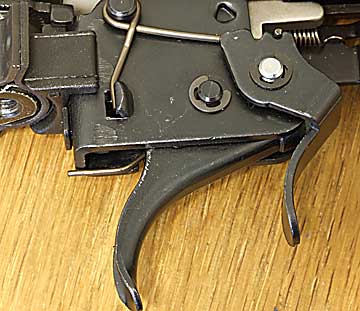 The old trigger blade is held by a single pivot pin. Remove the circlip and push the pin out. The trigger unit doesn’t have to come out.

At this point, I want to mention something the instructions dwell on. Inside the trigger housing is a lever that acts on the sear. This lever isn’t bushed on its pins, so it has a tendency to get out of alignment. The trigger blade has ears that fit on either side of this lever and prevent it from moving, but these ears have to be aligned with the lever (so it fits between them) or it will be permanently depressed and the rifle won’t cock. That fit is something you have to check as you install the new blade. 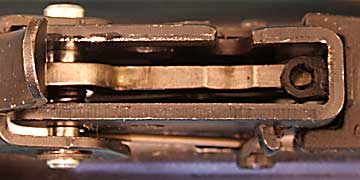 Install the new trigger blade
Installation is a snap. Simply locate the new trigger and install one cross pin. Then, fit the circlip, and you’re done. I had the entire job completed from start to finish in less than ten minutes, and I took my time. Next time, I’ll do it in less than five minutes. 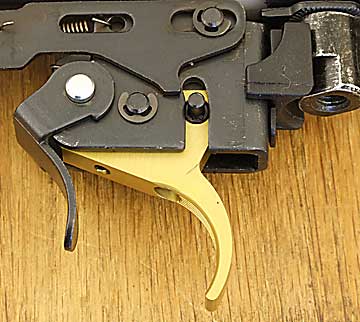 The new trigger blade fits in place and is held by a single pin.

And how does it work?
The new trigger works very well. It still isn’t a Rekord, but it’s both crisper and lighter than the original factory trigger. For a Gamo, it’s a peach of a trigger. Mine breaks at 1 lb., 14 ozs. after adjustment. I may adjust that some more as I become familiar with it.

The nature of the trigger changes entirely. At first, I thought I’d lost the second stage, but it’s still there. However, most of the pull weight is loaded into the first stage, then you feel the second stage hesitate and just a few more grams of pressure releases the sear. You can also pull the trigger but not fire the rifle. You will have removed some of the trigger-pull. It doesn’t reset; it’s just closer to release. It takes some getting used to, and it’s extremely similar to a 10-meter target pistol trigger that can do the same thing. Once you know how it works, I’m sure you can do very good work with this trigger.

I have nothing but admiration for the man who thought up this modification. Partly, for how well it works, but mostly because it was done in such a way that it’s easy to install. Yet, after installation, it’s still finely adjustable. That’s the sign of a good product.

Now that there’s a nice trigger on this rifle, it’s time to tell you about the HUGE surprise you have all been waiting for. Tomorrow.