Collector alert!
Collectors, there is an estate sale going on right now on the internet. Many of the guns have already been sold, but there are still a few choice items left. Also, there’s a treasure trove of old airgun literature, including a rare first edition Beeman catalog. The site says estate auction, but what you do is make an offer to them. If they find it acceptable, they contact you, and you buy the gun or whatever.

Take this link to the estate sale.

There is more than what’s listed. All the rifles are listed, but there are a couple of air pistols and a lot more literature than what you see on the site. Be sure to use the scroll bar and to click on the other links on the left side of the page. The former owner passed away a few years ago and his brother is helping the widow sell the items. I’ve already had a transaction with them and everything went well. Be sure to ask about condition because the photos do not show detail.

The family is having more difficulties right now, so it may take a while for someone to get back to you. Just be patient.

The best of the best
Today, we’ll look at what many people believe to be the highest pinnacle in airgunning – the Olympic target rifle. When I got back into airgunning in 1976, these rifles were selling for $500-700. Today, they push $3,000.

There’s hope
Fortunately, for those who don’t have trust funds, there’s a dynamic in 10-meter rifles and pistols that exists nowhere else in airgunning – planned obsolescence! Every few years, some new technology comes along and carries the majority of world-class shooters along to the next level. Many of them are sponsored and don’t buy their guns to begin with; but once the movement starts, there’s no stopping it. What it leaves behind is a host of deeply discounted, slightly out-of-date rifles, any of which could still win gold. I’ll talk about used rifles in a different post, because today I want to concentrate on the state of the art.

Ergonomics – the top feature today
Without a doubt, the man-machine interface is what sets today’s 10-meter guns apart. Since the 1960s, these guns have been improving in this area, but in the late 1990s they underwent a total transformation. Nearly everything that can be adjusted on the guns is now movable so it can adapt to whatever body configuration and shooting style might be desired. The only area yet to be optimized is those shooters with disabilities, and that’s because each disability is unique. But, for able-bodied shooters, the new rifles offer near-perfect fit. 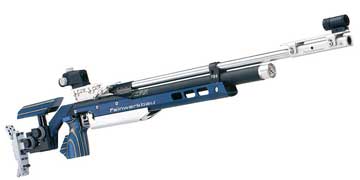 More adjustments than a Hollywood divorce! The new Feinwekbau 700 target rifle has it all. It’s a PCP with removable air cylinders and has FWB’s anti-recoil stabilization to cancel the tiny reaction when the pellet moves. However, as difficult as it is to believe when looking at this masterpiece, in 10 years it’ll be obsolete on the world stage. 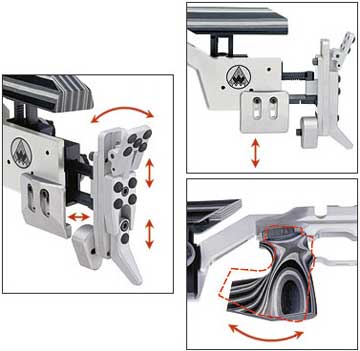 A look at three of the numerous adjustments on the FWB 700 reveals the extent the designers went to to adapt this rifle to a shooter.
Anti-recoil
About 10 years ago, two top airgun makers pioneered a way of canceling the slight movement that’s transmitted when the gun fires. Newton’s third law of motion cannot be ignored, and for every action there is an equal and opposite reaction. Shooters call this recoil. The amount of recoil depends on the mass of the object being acted upon, and in a 10-meter target rifle, that’s a .177 caliber pellet weighing about 8.5 grains. That mass is accelerated to a given velocity by a certain amount of force. The rifle reacts to the movement of the pellet by moving in the opposite direction with the same force. The force that pushes an 8-grain pellet to 580 f.p.s. doesn’t do much when it encounters a rifle that weighs 75,600 grains. In fact, as far as most people are concerned, there’s no movement at all. To a person who can detect a movement as small as 0.01″ while looking through precision sights, the reactive motion is present and significant. So, something was done.


In one system, a small weight inside the gun’s action is pushed backwards with the same force that pushes the pellet forward. It travels for a short distance expending the minimal energy and the shooter never feels anything. I’ve shot rifles and pistols equipped with this technology, and the only clue you have that the gun fires is the sound it makes. There’s not so much as a pulse of feeling when the gun fires! It makes an IZH 46M feel like a .22 rimfire in comparison.

Sights
I would have guessed that sights had progressed as far as they could go back in the 1970s, but they’ve kept pace with the new guns. Sights don’t change as rapidly as rifles; they’re on an advancement schedule of every 10-15 years, as opposed to every 5-10 years. And, unlike the guns, they aren’t always abandoned when something new comes along. I have sight components, like a Gehman variable diopter and a set of graduated transparent front apertures, that I move from gun to gun. The Gehman design is over 40 years old, and the front apertures are at least 15 years old. Today, several front sights have the same feature by pressing an o-ring between two pieces of plexiglass. The o-ring fattens and thins based on the pressure. 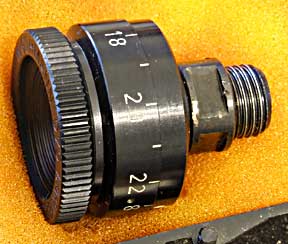 For the past 40+ years, Gehmann has made this adjustable rear aperture for target rifles. It’s hard to make something like this more modern. 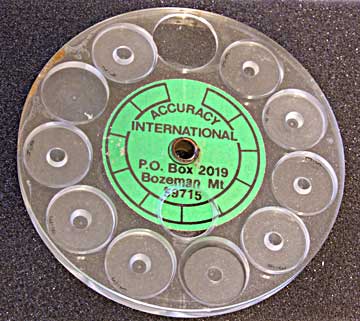 Graduated transparent front apertures allow for individual tastes and lighting changes.
Fill pressure
Walther rifles fill to 300 bar (4350 psi). All others that I’m aware of fill to 200 bar, which is more common worldwide. Walther gets more shots from this higher fill pressure, but the lack of fill equipment, especially in the U.S., limits shooters. The guns will function with a lower-pressure fill, but total shots are fewer.

Acceptable specifications for competition
You can compete without the stabilization and even without the ergonomics. You should use either compressed air or have a single-stroke pneumatic action. The sights must be world-class but do not have to be the latest models.

I sense you readers want to know more about these rifles. Please tell me in your remarks what it is you’d like to know. In the next installment, I’ll talk about things like triggers, power and how it has declined over the years, the progression of powerplants through time (1965 to now) and accuracy.