Before I begin, let me tell you that I just purchased a BSF 55N breakbarrel spring rifle. This rifle was originally sold by Air Rifle Headquarters and was sent back in 1980 for some repair work. I had one of these years ago that I let get away, but this one will remain with me. It’s one of four air rifles that broke the 800 f.p.s. barrier back in the 1970s and was one of the first air rifles to carry the magnumlabel. I lived in the German city where this rifle was made when I served in the Army, so I’ve always had a soft spot in my heart for it. There will be a report coming in the future. But, today, we’re back with the Theoben Fenman.

Last time, I told you about the bad experience I had when the Fenman first arrived. After the rifle was fixed, it functioned perfectly and made me glad I’d bought it. I told you that the power was down to 12 foot-pounds, which is a Crosman Premier 7.9-grain pellet going 825 f.p.s. That may not seem like much in this day of 1400+ f.p.s., but the Fenman was accurate and easy to shoot on top of everything else. I was able to connect with my intended targets with all that velocity, and that makes more of an imporession than missing them with double the energy. 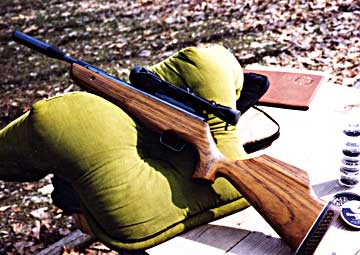 Here’s one of the few color photos I have of my old Fenman. I was at the DIFTA sight-in range on this day.
Back in those days, all Theoben gas spring rifles were owner-adjustable, through a screw on the back of the spring tube. Remove the screw, and you gained access to a port where air could be pumped into or released from the spring. 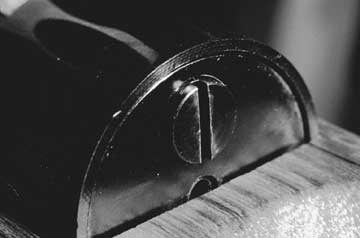 Remove this screw at the rear of the spring tube and gain access to the Theoben gas spring. 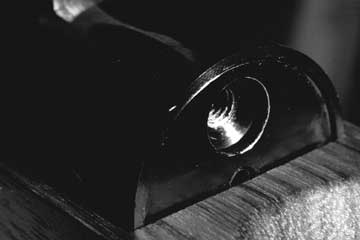 With the screw out, you have access to a Schrader valve (like a common bicycle tire valve). The pin isn’t visible in this shot, but it’s there. Pushing it releases air pressure. With a special Slim Jim pump, you can add pressure to the spring.
Of course, it was the adjustability of the spring that caused the problem I reported in the first installment. To pressurize the rifle correctly, you were supposed to fill the spring and fire the rifle through a chronograph. When it stopped gaining speed, you were done. My Fenman never stopped gaining speed, which is why it was sent to me over-pressurized. It should have topped-out at 12 foot-pounds, but it was producing almost 15 foot-pounds when I got it. Back down at 12 foot-pounds, the cocking effort was about 42 lbs. which is hard but not unreasonable.

Firing behavior
How the gun felt when fired was its principle joy. The recoil was very light (the rifle had to be held lightly for this) and the firing jolt was very minimal. For those who’ve shot Theoben Eliminators or Beeman Crow Magnums, a Fenman is a completely different experience.

The trigger – can you say perfection?
A Theoben Fenman trigger is based loosely on the Gamo trigger design, but it’s no Gamo! It is, without a doubt, the best spring rifle trigger I’ve ever felt. The break is so crisp that it’s like breaking the proverbial glass rod, and the trigger blade is nearly vertical, which gives you wonderful control. The movement is straight back until the break. The only thing that would have made it better was the presence of an overtravel adjustment. I credit this trigger for a lot of the exceptional offhand accuracy of the rifle. 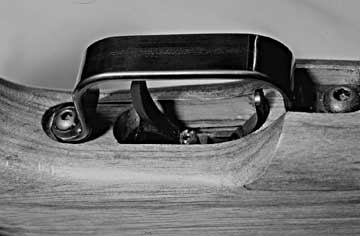 The Fenman trigger is adjustable and has a lot of similarity to a Gamo trigger. It is, however, glass-crisp and very light. The automatic safety (lever in front of the trigger) must be pressed forward before shooting, but can be reapplied any time the rifle is cocked.
Don’t forget that you can leave a gas spring cocked for hours if you like. The spring does not degrade. Having a safety that can be reapplied becomes an important feature in what is, essentially, a hunting gun.

Accuracy
My .177 liked Beeman Kodiak pellets best of all, giving me 5-shot groups of less than one inch at 40 yards. That’s pretty darned good for any springer! Believe it or not, the actual barrel length on this rifle is only 7.375″ long. The barrel brake adds some extra length to make cocking easier. For those keeping score, I think this is the shortest rifle barrel I’ve ever tested, and yet it can develop almost 15 foot-pounds in .177 if pressed.

Why didn’t I keep it?
The answer is that the caliber was wrong for me. Had it been a .22, I think I would still own the rifle. I loved the little .22 I shot, but somehow the .177 didn’t thrill me in the same way. Yes, it was much faster, but the .22 just seemed magical in the accuracy department.

Sadly, they don’t make the Fenman anymore, though you can find a used one if you look. A modern equivalent, in experience, but not in finish, is the Gamo Whisper in .177 with an Air Venturi gas spring. That rifle thrills me in the smaller caliber in exactly the same way the Fenman did in .22.