Before I begin today, I must retract something I recently said. Several days ago, I showed you a photo of the new Crosman Outdoorsman 2250XE I saw at the SHOT Show. I told you the pistol would be sold only by Crosman, through their Custom Shop. That was incorrect. In fact, Pyramyd Air is proud to now offer the Outdoorsman 2250 XE in their Crosman lineup. I also got it in my head that it was a pistol with a shoulder stock. It’s not…it’s a rifle. It’ll be available in .22 caliber when it reaches Pyramyd Air the beginning of March. I don’t know how many they’ll get, but one look at that custom skeleton stock suggests these will be in short supply. I’m sorry I led you astray with my prediction.

Many of our readers are relatively new to airgunning and don’t remember the stuff we went through over the past 50 years. So, when I start talking about “pure” lead pellets as opposed to hard lead pellets, I get a lot of questions. I don’t mind the questions, but in the case of pellets I’d like you to know some of what has happened over the past half-century, so you can appreciate what we have today.

Going back to the 1960s, the airguns we had in the U.S. were primitive compared to today’s standards. Those were the days of the “Benjamin Franklin” guns and also the days of Sheridan and Crosman. Manufacturers were starting to experiment with materials and finishes, and we all lamented the loss of the blued steel, nickelplating and wood that was traded for painted metal, cast metal and plastic. In the U.S., we were unaware (for the most part) of the fine European spring rifles and pistols made by Weihrauch, BSF and Diana. Air Rifle Headquarters was just beginning to explore that world in 1963, and it wouldn’t become widely known until Robert Beeman lent his golden touch in 1974. We were also unaware of the pellets that the European companies were just beginning to make – pellets that would redefine the accuracy of airguns in time.

This was also the time when some companies such as Crosman were starting to make repeating pellet guns. Some, like the Single-Action Six, were of conventional design, while others, like the model 600 pistol, were far ahead of their time. And, the pellets Crosman made for these guns were responsible, in part, for their mediocre level of performance at that point in time, just as were the leaky CO2 cartridges of that era.

Super Pells – flying ashcans
The pellets in question were called Crosman Super Pells during this time, and they came in red and black tins that resembled spice tins. Later in the ’70s, the boxes were changed to a long plastic tube with a square section, but the pellets inside remained the same. They were, in fact, the same pellets Crosman had made on the same machinery since production began in the 1920s! Over the course of 60 years, the pellet-making machinery wore out and the shape of the pellets morphed from a traditional wasp-waisted diabolo into a lead cylinder with barely the hint of a waist – not too dissimilar from aging Hollywood starlets. It was those rough cylinders – we called them flying ashcans – that I shot from all my Crosman airguns of 1958 until 1990. 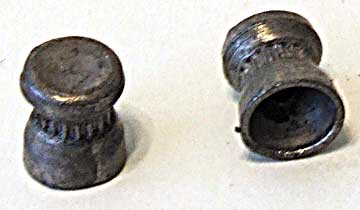 These Crosman Super Pells are of 1970s vintage, which means they were about as bad as the line ever got.

Those pellets were also made of pure lead, which made them easier to form but far more prone to damage during handling. In fact, in those days, you were lucky if a pellet started out round at the base. We took it on faith that the blast of air or CO2 would swage out the pellet skirt into the barrel walls, making it uniform, but I know now that probably didn’t happen outside of the few spring-piston guns that existed.

Being soft lead and prone to deform, those old Super Pells didn’t want to feed through repeating mechanisms. They were okay for revolvers like the SA-6 and the 38T and 38C; but in a 10-shot semiauto 600, they tended to jam the mechanism. We blamed the guns, because there weren’t a lot of choices when it came to pellets in those days. Only Crosman and Benjamin brands were popularly available, and the Benjamins, while more like a conventional diabolo, were just as out-of-round, misshapen and prone to deforming.

So fine repeating semiautos like the 600 and the 451 languished, because the powerlets all leaked and the pellets jammed the mechanisms. Imagine our surprise to rediscover these fine guns in the 1990s, when we learned they were accurate, powerful and very reliable when fed good pellets!

Quick to oxidize
Another flaw the older pellets had was oxidation. Within a year or two, they would start to accumulate a dusty white coat of lead oxide if left exposed. Benjamin pellets came coated with thick oil and they oxidized, too. Today’s pellets have either an oil, wax or graphite coating that resists oxidation for a lot longer, though they do cause airgunners to think their bores are dirty when the compound scrapes off.

I believe Crosman’s investment in repeaters caused them to think about hardening the lead in their pellets when they came out with their new line of pellets at the end of the 1980s. Premiers are not the only pellet that’s made from hardened lead – the entire Crosman lead pellet line is hardened with antimony. As a result, they deform less and feed better through mechanisms than soft lead pellets. However, they also deposit lead in the barrel at lower velocities than pure lead pellets. That’s a drawback. The repeaters Crosman makes are all low velocity and aren’t bothered by it, but when Premiers are shot from magnum guns at high velocities, they need to be lubricated or they’ll lead the bore. 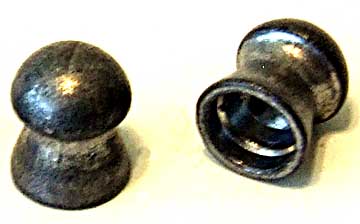 The Premier is the flagship of Crosman’s pellet line. For all of the 1990s, they were the most accurate pellet in the world.