This thumbhole HW 35 is a rare version of the popular rifle.

The Weihrauch HW35 holds the record as the spring air rifle with the longest continuous production. Started in 1951 and never out of production through the present time, the 35 has seen hundreds of other classics come and go. When it was launched, the 35 was the first air rifle to have the famous Rekord trigger, which must have looked pretty spectacular back then. It’s still the gold standard for sporting triggers, but a half century ago there was nothing even remotely like it. 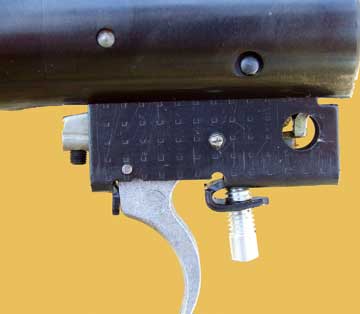 Rekord trigger shown here in the cocked state has ruled the airgun world for over a half-century.

The HW35 has always been described as a big airgun. In its heyday, it reached velocities in the mid-700s in .177 caliber, which was as fast as a spring gun could shoot. The leather piston seal it originally had was no drawback to speed, but when the velocity races began near the end of the 1970s and Weihrauch switched to synthetic seals, the 35’s major shortcoming became glaringly obvious. It had a huge piston that was, unfortunately, short-stroked. More on that in a bit.

Breech lock
When the 35 came to market, airgun designers were not sure that the breeches of breakbarrel rifles remained sufficiently closed during firing, so a number of models had positive breech locks. The HW35’s lock extends from the left side of the base block, where the left thumb can hook it during cocking. It really doesn’t take much longer to cock this rifle, so the lock remained on the rifle. Breech locks are not common today, now that breech locking detents are more trusted, but the lock on the 35 is a pleasant reminder of the age of the design. 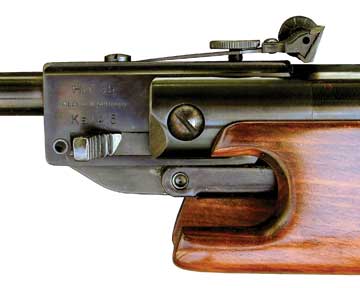 To open the breech, pull the latch forward first.

Sights
When the 35 was launched, scopes were uncommon for sporting airguns, so a fine open sighting system was installed. The front is a globe with interchangeable inserts, and the rear is a click-adjustable open notch. At the extreme rear of the rifle, an 11mm dovetail and two vertical holes were not for scope mounts but for Weihrauch’s diopter target sight. There were no formal airgun target matches in those days, but they were coming, and rifles like the HW35 were perceived to be suitable for target use, as well. 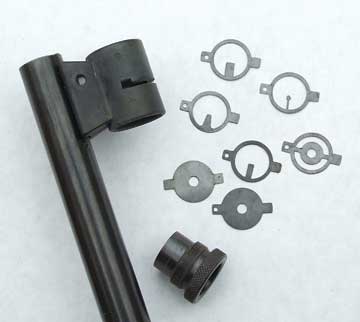 Articulated cocking link
In those days, all spring rifles vibrated, so anything that could lessen the buzz was considered. The HW35 had an articulated cocking link that allowed the cocking slot in the firearm to be very short, and the belief was that a solid forearm helped dampen the vibration. Whether it did or not is open for debate, but it provided a good place for a front sling swivel. 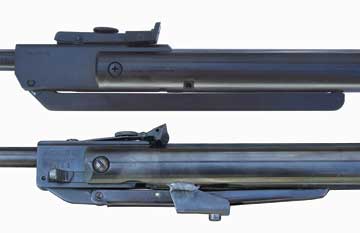 The Diana 45 (top) has a one-piece cocking link, while the HW35 below has a two-piece articulated link. The steel bridge holds the link close to the spring cylinder.

The Diana 45 (top) forearm needs a long slot for the link to clear while cocking. The HW35 (bottom) has a much shorter slot.

It couldn’t keep up
The 35 is a large air rifle, which led a lot of people to think it should also be a powerful one. When first launched, it was among the most powerful spring guns, but when the velocity races began in the late 1970s, the 35 just couldn’t keep up. It became obvious that although it had the largest piston on the market, the stroke was too short, robbing the gun of a lot of potential. Some 35s could make 800 f.p.s. with proper tuning, but that was as far as they went.

When the R1/HW80 was developed in 1982, it used the same diameter piston but had a much longer piston stroke. The result was the fastest spring rifle in the world for a little while. That dramatically demonstrated how much a piston’s stroke affects power.

Different models
Because of the length of the production run, the HW35 has been made in dozens of different styles. The thumbhole stock shown here is uncommon, as are all of the walnut-stocked rifles. The EL 54 is a special HW35 variant that has an ether-injection device on the side of the compression tube. It uses controlled detonations to shoot heavy pellets or round balls up to 1,000 f.p.s. It is the most valuable of all the HW35s.

Not gone, but forgotten
As mentioned earlier, the HW35 is still in production today. Beeman stopped importing it many years ago. Since they’re the exclusive U.S. importer of Weihrauch, the model is no longer available to us. No doubt, Beeman believed that Americans want only the most powerful air rifles, which is correct. If they tried to reintroduce the 35 here in the U.S., the high price and mediocre velocity would spell disaster. Fortunately, there are still plenty of nice used 35s available, and they aren’t commanding a lot of money. Just make sure you buy one for the right reasons, because nobody can turn it into a powerhouse.