Pyramyd Air will have a booth in the exibit hall at the NRA Annual Meetings in Louisville, Kentucky, May 16-18 at the Kentucky Exposition Center. Admission is free to NRA members. Be sure to stop by the booth and say, “Hi,” if you’re at the show.

Also, the Little Rock Airgun Expo will be held this Friday and Saturday at the Saline County Fairgrounds in Benton Arkansas. Visit their website for all the information.

The first thing you’ll notice about the SIG Sauer SP 2022 BB pistol is that the sample I’m testing does not have the white letters shown in the photo on Pyramyd Air’s website. It is made by KWC, a well-known airsoft manufacturer that’s now making conventional airguns, as well. 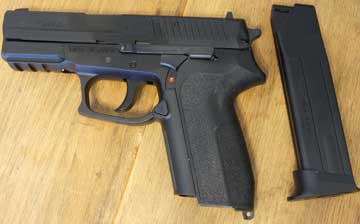 The SIG Sauer pistol and its magazine that also houses the CO2 cartridge. The aluminum magazine weighs more than the rest of the pistol!

This pistol is mostly polymer – something many shooters will want to know. With firearms being made from similar material these days, it isn’t that much of a stretch for air pistols to be made of the same material. Of course, the critical operating parts are metal, so the longevity is there just the same. And, the SIG Sauer SP2022 is in good company with other air pistols in its price range.

General
The controls are partly operational and partly for show. The magazine release on the left side of the grip does work and the mag drops free, just as it should. The safety is also on the left side of the grip and can be applied by the firing hand. That makes this pistol one designed for right-handed shooters, though I tried it in my left hand and found that both the mag release and the safety can be operated by that hand as well.

The hammer does move and is under spring tension, but it doesn’t move when the trigger is pulled. It can’t be cocked by hand because there’s no sear to hold it in position. The slide release is a separate part of the gun but it has no function. The slide is also separate but non-functional. When the gun is fired an internal striker does the shooting; the hammer doesn’t move and the slide remains stationary.

The box includes a small packet of BBs that appear to be of extremely high quality and uniformity. The surface finish is beyond any BB I’ve ever seen, and the diameter ranges between 0.1729″ and 0.173″. That’s one ten-thousandth of an inch of variation, which is ten times better than a BB. They look more like ball bearings than actual BBs, but I’ll wait until I shoot the gun to tell you if it makes any difference.

Accessory rail
The forward underside of the frame has a short Picatinny rail, so you can mount aftermarket lasers and tactical flashlights with no problem. Pick something short, like Leapers deluxe tactical laser perhaps. Just pick something that doesn’t have to conform to a specific shape of the triggerguard – something that’s not model-specific. 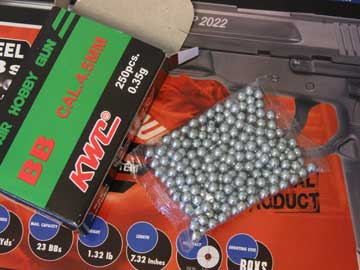 The pistol comes with a small packet of BBs that look nothing like Crosman or Daisy BBs. These are remarkably uniform in both their size and the smoothness of their surface finish. Perhaps they’re ball bearings.

The instruction manual is very much like an airsoft gun manual – lots of pictures with few words. It fits on one side of a single 8.5″x11″ sheet of paper. Both outside covers contain standard warnings, and everything is written in proper English.

The sights appear to be adjustable for windage by sliding them in their dovetails…until you look closer. They’re molded in one piece and the dovetails, while appearing very realistic, are not. The front has a single large white dot set into a conventional square post. The rear is a wide square notch.

The pistol is double-action only, with a light, smooth trigger-pull. It breaks at 6 lbs., 10 ozs with no noticeable creep. You should be able to fire the 23 BBs from the magazine very fast.

Loading
The BBs load in a single stack in the front of the aluminum magazine. A 12-gram CO2 cartridge is housed in the rear, where it’s entirely out of sight. KWC has recessed the cap that covers the CO2 cartridge so, from the side, the pistol’s profile is clean. That’s a feature air pistol shooters are very sensitive to, so this was a good move. To open the cap and change CO2 cartridges, you the large 1/4″ Allen wrench that comes with the gun. The cap is molded plastic, but the large size of the Allen wrench socket means very little strain is put on it when tightening to pierce the cartridge. 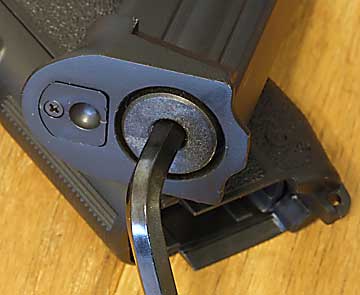 Looking at the bottom of the magazine after installing a fresh CO2 cartridge. The CO2 cap is plastic, and the Allen socket is so large that the wrench hardly puts any strain on it at all. CO2 cartridges were pierced very easily.

Remember to put Crosman Pellgunoil on the tip of each new CO2 cartridge you pierce. An alternative way to do it is to turn the gun so the magazine hole points straight up, then just drop the Pellgunoil straight down inside. That’s what I did, and the gun sealed quickly after piercing.

The advertised velocity is 330 f.p.s., so I will also be counting the number of good shots I get with a cartridge. I’m guessing at least 70 or so, which would be three magazines of BBs. The BBs are loaded one at a time through the same hole they’re shot from, while your other hand holds down the spring-loaded follower. It takes quite a while to load them all, and the irony is that you’re probably going to dump them in less than 20 seconds. The BB count of 23 is right on the money, so no confusion about how many this gun holds.

Well, that’s it for now. No good/bad assessments yet, but a hunch tells me KWC wouldn’t make a gun that wasn’t good. At least, that’s been my experience with their airsoft guns.