Guest blogger
Here’s another guest blogger. BG_Farmer customizes a QB36-2 for us. He admits to not being an experienced airgun tinkerer, so this will provide some encouragement to those who’ve been waiting for a beginner’s project.

After just a couple months of airgunning, I dedicated my Hammerli 490 to 10m targets and 20m plinking with open sights, as it’s too much fun to mess up with a scope. However, I wanted to keep up my skills with scopes for firearms, as that was one of my initial justifications for getting an airgun.

I decided to get another air rifle to dedicate to long-range targets and silhouette shooting with a scope. Since we have a breakbarrel and a sidelever (my wife’s QB88), it seemed that an underlever would be best, especially considering the scope requirement.

At my level of the sport and cheapness, however, a TX200 or HW97 seemed silly. That kind of money would go to a 10m gun or PCP, so I ended up with a QB36-2 (generic industry base for Tech Force 99) for a low price, with the hope I could improve and fix it if necessary and learn something in the process. I wasn’t disappointed.

Canted action, massive stock – my work was cut out for me
Out of the box, the gun was pretty much as BB described it in his Tech Force 99 blog, except that the entire action was mounted at an angle due to an improperly drilled rear action screw (behind the trigger group), resulting in a cant. 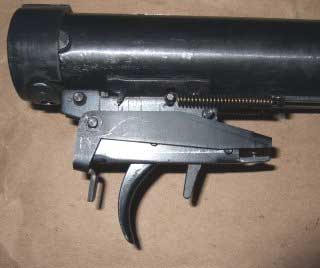 Now out of the stock, you see the rifle action and trigger module.

It was easy to fix the cant with a drill and tap, but the huge stock and excessive length of pull just didn’t fit me, so I whittled down the tight-grained, beech-like wood (acacia?) substantially with 50-grit sandpaper and some saw and chisel work. I removed all but what was necessary of the cheekrest.

I recontoured the forearm since the original design looked racy but resulted in thin, fragile wood at the front. The pistol grip was reduced from chunky to merely substantial. I block-sanded up to 220 grit (at least as thoroughly as the factory) before using a water-based walnut stain and 3 coats of oil-based semi-gloss polyurethane with a scrub-pad finish (to cut the sheen a bit). The finishes were chosen mainly because I’ve used them before and had the materials on hand. My goals were function and fit beyond all else, although I may try my hand at making it fancier or even adding checkering later.

Accuracy testing…and more problems
After the stock work, I was pretty happy with the rifle, as it fit me and was shooting accurately and powerfully. Accuracy at 20 yards was approaching .50″ with little effort using Crosman Copperhead Competition Wadcutters. You can see why I liked it despite its problems. As far as power, it penetrated both sides of a steel, water-filled can at 20 yards with the same pellets. With open sights, I consistently hit targets at 50 yards and a coffee can at 75 yards.

I added a scope, according to my original plan. I originally selected a 4×32, but it broke within 50 shots. A 3-9x32AO went on next. It held up but wouldn’t stay in place after several hundred break-in shots. The scope stop bent like a potato chip. The rifle also started to shoot erratically, which I blamed on the scope-shift at that time, although now I don’t think that was the main problem.

One day, the rifle wouldn’t cock, so I shook it vigorously and whacked it gently against a post, whereupon a coil of spring fell out. The rifle actually cocked better and shot smoother afterwards, despite the occasional piece of spring jamming the action. However, I knew I needed to fix it before it could be used seriously.

Spring time!
Having spent a good deal of time redoing the stock, I decided to see if I could also improve the firing cycle rather than simply replace the broken spring, so I ordered an aftermarket spring (Jim Maccari’s e3650) and synthetic seal (Maccari’s Apex) along with some of Jim’s heavy tar.

The spring had broken in 2 places. 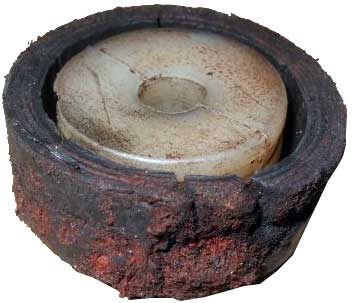 The dry, torn leather seal added to the gun’s problems.

The spring was broken in several places, with the longest piece being roughly 8″ long. The leather seal was torn (probably at time of manufacture by the rough cocking shoe cutout) and dry, despite having lubricated it as much as I dared. It’s amazing that the gun shot at all. I think the torn seal allowed enough energy to come up from the spring to put out pretty good (but inconsistent) power via dieseling.

The piston is fabricated out of rolled steel and had some pretty rough welds on it. Remarkably, the finish inside the cylinder was smooth (except for the cocking shoe cutout). I’m no tuner, but it seemed pretty obvious what had to be done in terms of polishing and lubricating. After degreasing with acetone (I’m not recommending it; it’s just what I used), all contact surfaces and rough welds were smoothed down to 220-grit smoothness. Sounds coarse, but it did the job. It was certainly much smoother than the factory finish on the interior metal, even after several hundred shots of break-in.

My goal was not to equal the original factory specification of 900 fps or the 1100 fps claims some make for this rifle. I just wanted to make it smoother and more consistent, with just enough velocity (gauged by use) to shoot well to 50 yards with the proper pellets.

I spaced the preset spring in the piston until there was a little preload on it when pushing in the end cap. It’s still a hand operation. WARNING: Use a spring compressor. I knew my spring was broken, so there was very little tension on it, but I should have been more careful and used a compressor anyway. The stock spring on a QB36-2 is monstrously long, so it has a huge amount of preload (compression when uncocked).

The old, broken spring and the new one (inserted into the piston).

The difference in stack height (compressed length) between the old and new springs was approximately 1.8″, but I spaced the new spring about 1.25″ inside the piston, using washers to take up the space. When I ran out of washers, I used pennies sandwiched between washers.

Due to the position of the piston latch, there was very little (if any) room for spacing at the base of the guide. I was afraid that making the piston heavier would degrade the firing cycle. In the end, I think the extra weight in the piston may have actually improved the firing cycle, working in concert with the somewhat softer spring to stabilize the piston’s velocity.

Sealing the deal
The synthetic seal got a custom (shade-tree engineered) mounting, made with a plastic conical washer to fit inside the seal. The new seal also required spacing (fender washers) on top of the piston, since it was thinner than the factory one. The design depends on the seal thickness, as the seal and piston are pushed back by the sliding cylinder. I added a drop of silicone oil on the edge of the seal before inserting it in the cylinder.

On the forums, I’ve seen many nice lathe-turned seal conversions, and was afraid mine would explode on the first firing, but it’s held for about 300 shots with no sign of degradation. Maybe the blue thread locker I used on the (original) screw secured the seal. If it breaks, I’ll make something better. Meanwhile, it works.

Tarred & molyed
After polishing parts and assembling the piston and seal, the cylinder and main tube got very spare amounts of Beeman M2M Moly Paste rubbed in, while the spring got a very light coat of Maccari’s heavy tar on the outside and on the plastic spring guide, as well as a little bit of M2M moly on the ends.

The trigger was light enough for me, so I didn’t do anything fancy other than make sure it had no burrs. I also added a little M2M moly. If I were to do it over again, I’d do even less to the trigger and dispense with the moly, since the trigger is now almost lighter than I like it. Variations are almost a certainty, however, with these guns.

How it all turned out
Putting the rifle back together, I didn’t have high expectations, given my level of knowledge (none) and mechanical ability (little), but it did cock and fire. Actually, it cocks very smoothly and lighter than before, with the cocking effort roughly in the high 20s, whereas it was in the mid-30s when new. The firing cycle is now amazingly smooth, just a little harder/rougher than my Hammerli 490 (which is not a harsh shooter at all). Of course, the power is higher, too.

There was no dieseling, even on the first shot, and no vibration to speak of, although I could have been just a little more generous with the heavy tar. The power is probably slightly reduced from stock, but nowhere near as much as I would have thought. It still puts a Copperhead wadcutter through both sides of a water-filled, steel can with a nice plume of water for effect, and 75-yard shots at coffee cans with RWS Superdomes are possible.

The weight of the gun and its muzzle-heaviness have now become an asset. With the new spring and seal, the rifle doesn’t move when fired, so it’s excellent for offhand (which is good, because that’s the way I shoot). I believe the original spring with its significant preload might have been too much for the stroke, not to mention obviously brittle or otherwise deficient. I was amazed at the obvious differences in quality between the stock spring and seal and the Maccari replacements. I shouldn’t have to say it, but I will anyway…the Maccari parts were of much higher quality than the Shanghai originals.

Soon, I’ll remount the scope. I expect it to stay on better, although I still need to deal with a bit of barrel droop. Accuracy is consistent now with RWS Superdomes and Crosman pointed pellets, so I’m hopeful that the rifle is going to work out for my application. Ironically, while continuing to shoot the 490 and debugging this one with open sights, I’ve found that I’m getting good enough with open sights again (even at decent ranges), that I would consider getting rid of scopes. Almost daily practice with airguns is better training than what I formerly thought was frequent shooting.

66 thoughts on “From Clunk to Thunk: A Beginner Customizes a Chinese QB36-2”