In Part 1, we looked at the outside of the Hakim. Today, I’ll go inside, plus give you performance numbers and tell you how to repair a bad piston seal. But first, I must thank Bob from Oz who sent me a link to an article from a 2007 issue of Airgun World magazine. It was about the German Falke 90 air rifle. When I printed it out and looked at the details, I couldn’t believe my eyes. Here was the spitting image of the Hakim in a sporter style. That article was based in part on the Blue Book of Airguns, so the information has been under my eyes for many years! But there’s even more.

The author, Tim Saunders, remarks how closely the Falke 90 copied the BSA Airsporter – a rifle I’ve never seen but will search for now. Because Saunders, who couldn’t take apart the Falke 90 he examined, was able to describe the rather strange piston to a T, I gather he is correct in assuming the Falke 90 copies the inside of the BSA Airsporter, and, what’s more, the Anschutz Hakim. That article filled in a lot of blanks for me, because it extended the history of the Hakim from 1954 back to 1948, when the first Airsporter was made. If you would like to read the article, here are the pages:

Performance
Like I mentioned in Part 1, I’ve owned a lot of Hakims over the years. So, I’ve had a chance to examine guns in all states of tune – from weak to hot-rodded. In fact, the rifle shown in part one is the fastest Hakim I’ve ever tested. It shot RWS Superpoints at 650 f.p.s. – way faster than ever intended by the manufacturer. It was also the only Hakim I’ve ever owned that fired harshly. Another person tuned that rifle and was clearly going for speed above all else.

A good Hakim will push a Superpoint out the muzzle at 500-550 f.p.s. An average one will go 475, and the dogs will shoot at 450 and below. The hottest one I ever tuned myself went 615 f.p.s. and was still as smooth as any other Hakim – which is to say incredibly smooth.

Accuracy
A Hakim is not far behind a good 10-meter rifle for accuracy at 10 meters. It’s a one-hole gun for sure, and groups of 0.10″ are common.

Maintenance
Although it has a synthetic parachute piston seal, the Hakim needs lots of oil. Yes, this 1954 rifle has a synthetic seal. Most of the ones I’ve examined are still working well, but a couple had nails and pellets impacted in the seal. That tore the seal rim, so the seal had to be replaced. I’m going to show you how that’s done today, and a modern RWS Diana parachute seal can be sized down to fit and function fine. You can read about that in the report on Spring piston seals. 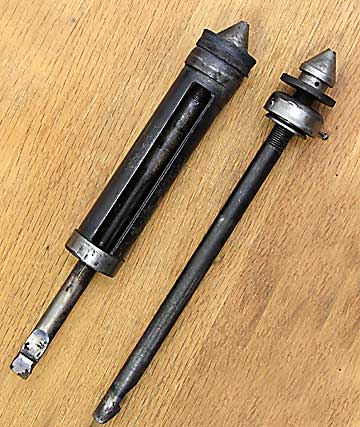 This shows a Hakim piston (left) and a disassembled piston assembly. 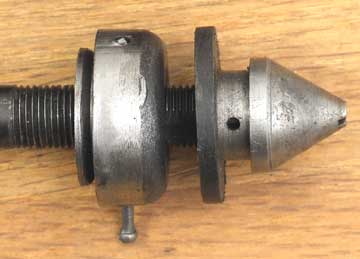 Here’s the detail that shows how the piston goes together. The dark fiber washer at the bottom of the conical piston head backs the piston seal, not shown here. An RWS Diana piston seal is a good replacement for the original Hakim, though the outside diameter will have to be reduced to fit. 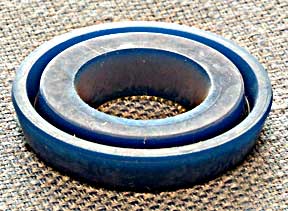 Blue Diana piston seal is a good replacement for the original Hakim seal.

Disassembly
If there’s an easier air rifle to disassemble, I sure don’t know about it. That said, I offer this caveat: Do NOT disassemble an airgun unless you are an airgunsmith. Mainsprings are under pressure and can cause serious injury or death. There are many parts to be detatched, but everything is straightforward with no surprises. Uncock the rifle and remove the action from the stock. That means removing the normal triggerguard screw plus a screw that runs sideways through the rifle. Some stock hardware will also have to come off, and the upper handguard separated from the stock.

The end cap can now be safely unscrewed from the spring tube without the use of a mainspring compressor, because there’s very little pre-tensioning of the mainspring. Only the hot-rodded rifle mentioned earlier had any reserve tension when the end cap came out, and even that was only a half-inch. A stock Hakim spring will be completely relaxed when the end cap comes off. With the end cap off, the mainspring comes out, followed by the piston. It takes 10 to 15 minutes to disassemble a Hakim this far, once you’ve done it a few times. 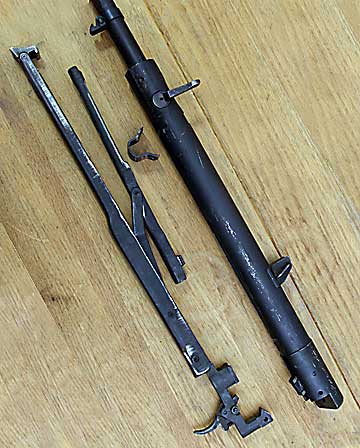 The cocking linkage and trigger assembly separates from the spring tube. Now the end cap can be unscrewed. 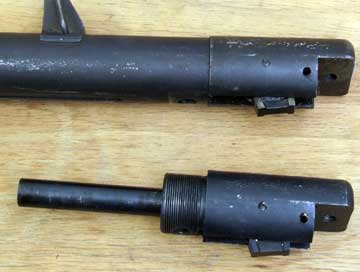 The endcap simply unscrews from the spring tube. Then, the mainspring and piston come out. The thing hanging down under the endcap is the sear.

Lubricate and reassemble
The guns straight from Egypt were filthy with dried grease and sand. They took a lot of cleaning and care. But you probably won’t encounter one of them today. Simply remove all the grease, then apply moly to the side of the piston seal and burnish some more moly inside the compression chamber. You’re going to oil this gun frequently anyway, so the moly may not even be necessary. I lube the mainspring with white lithium grease to not slow the spring in any way. Hakims don’t vibrate, as a rule – the exception being the hot-rodded rifle mentioned earlier. Reassemble the rifle and start enjoying it!

In the next report, I’ll give you some Hakim tips.