Apparently, I really screwed up yesterday’s report. First, I didn’t tell you that the distance I shot was 21 yards. Second, I didn’t give group sizes. That was intentional, because after three years of using the NRA official 50-foot smallbore target in my tests, I thought everyone knew what size it is. But they don’t. The two groups I showed measured 0.4″ and 0.606″ c-t-c. The black bull measures 1.573″ across.

I use that target because there are 11 bulls on a target sheet and I go through them fast. So it’s a matter of economy. The target paper is large enough to record a pellet strike at longer range during sight-in, which I’m constantly doing. The bull is a little larger than a 10-meter air rifle bull, so I can see it clearly at 50 yards through a 9x scope or better.

Today, I’ll continue the test of the Gamo Compact 10-meter target pistol. This will be the velocity test. I learned some interesting things about velocity in this session. Also, a warning from the Pyramyd Air techs: don’t use Raptors or any other non-lead metallic pellets in this pistol. If you have synthetic (plastic) target pellets, they’ll be okay, but PBAs get stuck in the bore, and I’m assuming other potmetal pellets will, too. Apparently, that’s how I came to get this pistol, which wasn’t brand-new.

RWS Hobbys
I started with RWS Hobby pellets because they’re the lightest lead pellet commonly available. They’re also wadcutters, which I recommend exclusively in a target pistol like the Compact. The only point of this gun is to punch round holes in paper targets, so all other pellet shapes are less desirable. You can use them, of course. They won’t hurt the gun. But only the wadcutter will do what the gun was designed to do–make crisp holes in paper.

The first string of Hobbys averaged 358 f.p.s., with a spread from 357 to 362. That’s a little slower than the 400 f.p.s. Gamo advertises for the gun, but hold off on those critiques. All guns vary a little, so you must allow for that. And something VERY interesting happened during this test. As I shot other heavier wadcutters, they were going as fast or faster than the Hobbys. So fast, in fact, that I retested the Hobbys at the end of the session. That’s about 50 shots later. Lo and behold, they now averaged 370 f.p.s., with a spread from 363 to 376. So, in 50 shots the average velocity moved up 12 f.p.s.

Do you remember what I told you about exercising that pump piston seal with the IZH 46? Well, it seems to work with the Compact, as well. No reason it shouldn’t, as the design and technology is identical for both guns. I just never experienced it with a Compact before. And, there’s something else. I learned that if you close the pump lever rapidly the gun will shoot faster than if you close it slowly. How you close the pump lever affects the velocity of the gun by 5-10 f.p.s. That’s worth knowing if you shoot a single-stroke.

Gamo Match
The first string I shot with 7.5-grain Gamo Match averaged 356 f.p.s., with a spread from 346 to 363. When I came back and reran the string, the average climbed to 364, with a spread from 363 to 365. Not only did the pellets go faster, the velocity was also much more consistent when the powerplant was warmed up.

Crosman Supermatch
You can’t buy Crosman Supermatch anymore but you can buy Crosman Premier Super Match, which are the same pellets. They just changed the name and packaging a few years ago. These 7.9-grain wadcutters averaged 353 f.p.s., with an extremely tight spread from 351 to 355. Second time around, the average climbed to 357 with a spread from 357 to 358. That’s right! A 1 f.p.s. spread. I’ve encountered that tight a spread before with good single-strokes, so it isn’t as much of a surprise as it is a confirmation that the Compact is made well.

H&N Finale Match
The H&N Finale Match pellets alerted me to the fact that the pistol was speeding up as I shot. They weigh 7.6 grains, which is 0.6 grains heavier than the RWS Hobbys, yet they averaged 366 f.p.s., with a spread from 363 to 369. I knew if they were going that fast, the Hobbys would have sped up, too, so I went back and retested them. I didn’t retest the H&Ns because they came at the point of the testing where the gun seemed to be going as fast as it could. 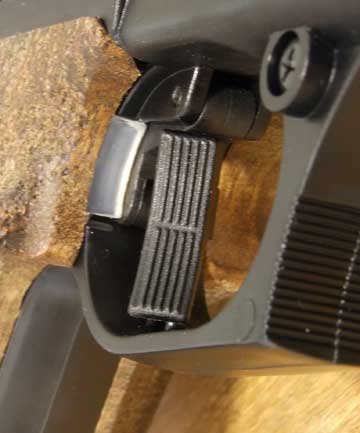 Most 10-meter pistols have a groove running across the center of the blade. This is where the trigger weight arm will rest when the trigger pull is tested before the match.

All this shooting has given the trigger a chance to lighten up with the lubrication I did in Part 1. Depending on where the pull gauge is put, the trigger pull ranges from 32 ozs. to 46 ozs. At the bottom of the trigger blade, it’s the lightest, so when I shoot the gun, I position my finger there. There’s a groove across the center of the trigger blade, which is where the official will locate the pull weights (they don’t use gauges in a match) to test for compliance with the 500-gram minimum-pull regulation. You don’t have to locate your trigger finger there when you shoot the match.