Let’s talk about aligning the pistol prior to sighting, breathing and how long before you abandon the shot and start over. In a formal match, you have 1.5 minutes for each shot. That’s plenty of time, yet it keeps a match rolling right along. I keep a stopwatch going so I always know where I am, time-wise, and I use a pellet counter to track which shot I’m on. I’ll cover the pellet counter next time.

Breathing and aligning are part of the same procedure
Breathing during a match is part of a rhythm or cadence the shooter gets into. Every shot is performed in exactly the same way, with exactly the same steps between the shots. I’ll describe how to breathe and how to raise the gun and align the sights. I didn’t make this up. I learned it from an excellent video RWS published about 15 years ago, where a world-class German shooter describes every step of how he shoots. After memorizing that procedure, I now see that all world-class shooters follow it. Only at regional matches do I ever see departures from this procedure.

The shooting table
Every 10-meter shooter has a table in front of him. It holds his pellets, and he rests his pistol there (but doesn’t let go of the grip) when not shooting. The table also keeps the shooter behind the 10-meter line.

Get ready
Rotate the pistol up on its muzzle in preparation to raise it. Take two or three deep breaths and let them out. Take one more deep breath as you simultaneously raise the pistol slightly higher than the target. Let out half of your breath as you rotate your wrist into the locked position and lower the sights just below the bullseye. Next, refine the sight picture and begin your trigger squeeze. This entire procedure take less than two seconds. 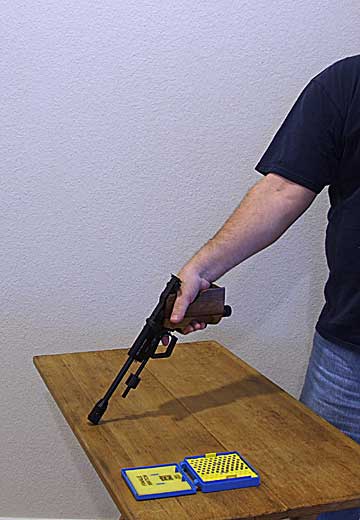 The pistol is rested but ready to raise. From this position take a deep breath and raise it straight up as you breathe in. 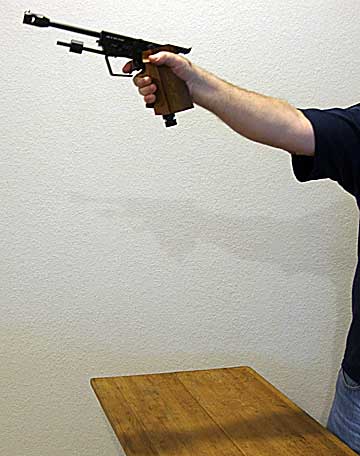 The pistol is up above the bullseye and the wrist is held naturally. Let half of that breath out and rotate the wrist down to the locked position. Lower the pistol, if necessary, to get on target.

Fire
The sights are now at a perfect 6 o’clock hold on the bull, and you’re squeezing the trigger. The shot should break within five seconds. If it doesn’t, relax your trigger finger and then lower the pistol. Five seconds is more than enough time to take the shot. Any longer, and your heartbeat starts moving your shooting arm. Don’t tell me how long you can hold your breath. I can hold mine for three minutes, twenty seconds, and it still makes no difference. Five seconds for the shot or you stop and start the procedure all over again. 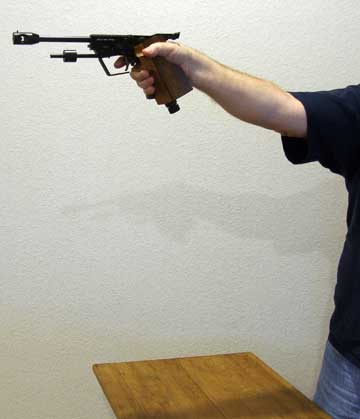 You have 5 seconds in this position, holding your breath. If the shot doesn’t break, release the trigger and lower the pistol to the ready position. Start the procedure again.

If you did exactly as I said, there would be no reason to continue this report; of course, you won’t in the beginning. Even I have a hard time, sometimes. I think, just another second – my sight picture looks SO good. That’s where the trouble begins. If you do that, you’ll soon be sniping at the target. Sniping (pulling the trigger in the hopes of hitting the target) will cost you big points in a match. Discipline is the lesson to be learned, and it’s a hard one.

The willingness to abandon a shot and start over will add oodles of points to your score once you can combine it with perfect concentration on just the front sight…but there’s a conflict. Perfect concentration means not thinking about anything else, while the willingness to give up means always thinking of the time. Each of us finds his own way to deal with this, and the ones who deal with it the best go on to become champions.

What’s a deep breath?
Your aren’t hyperventilating for a deepwater dive. You’re just breathing deeper than usual. The next competitor who stands 4-5 feet from you shouldn’t hear you breathe.

The imperfect body
The 10-meter stance is where you learn all about your physiology. As in, it’s time to give up caffeine. It wouldn’t hurt to run a mile or two every day. You may need to start weight training to strengthen your arm and shoulder muscles.

This is also where that less-than-perfect trigger makes itself known. The trigger on my pistol feels wonderful to a new shooter, but get used to it and every flaw pops out while you’re squeezing off the shots.

Next time I’ll talk about awareness during a match, which involves pellet count, keeping track of targets, watching the time and managing your air pistol.