I call this Part 1, but there have already been several helpful reports on this subject. Here they are:

The philosophy of the air pistol
Air pistols shooters are those people who were in the high school band. When they first saw the Sousaphone they asked, “Can I play the piccolo?” They see air rifle shooters showing up to a match with two large wheeled suitcases of equipment and they want everything to fit in a lunchbox. They shun shooting leathers for comfy sweatshirts and blue jeans. They wear running shoes, but for gosh sakes they never run in them!

Only after signing up for the air pistol were they informed that it is the most challenging discipline in all the shooting sports. But they figured the tradeoff was worth it…to not have to drag around all that equipment.

Stance
Stance is the first consideration for shooting the air pistol. How you stand determines where you’ll shoot, just as it determines where you can throw a ball. While it’s possible to stand facing the target, with the line of your body parallel to the target, that’s the wrong way to stand when you want to be accurate. If you had an arm coming straight out of your chest it would work well, but please notice that your arms are on either side of your body. Therefore, they cannot point straight ahead without a lot of muscles getting involved. We don’t want that.

We want a stance that uses your skeleton for support, with minimum reliance on your muscles. Rather than talk about it, I’ll show you. My illustration and discussion are for a right-handed shooter, but lefties need only reverse the instructions. 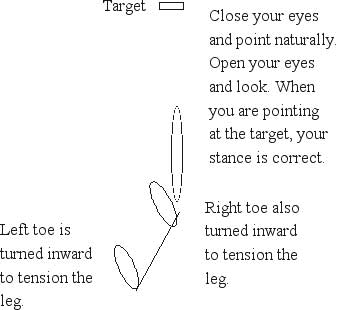 The placement of the feet determines where the shooting arm points. Your feet are shoulder-width apart, or perhaps slightly more.

Try this at home
Even if you don’t own an air pistol, you can try this stance. Once you get the hang of adjusting your feet, you’ll be amazed at how the stance determines how you shoot. Pick out an object far enough away that you can tell when you are or are not pointing at it. Now, adjust your feet like the illustration and point at the target. 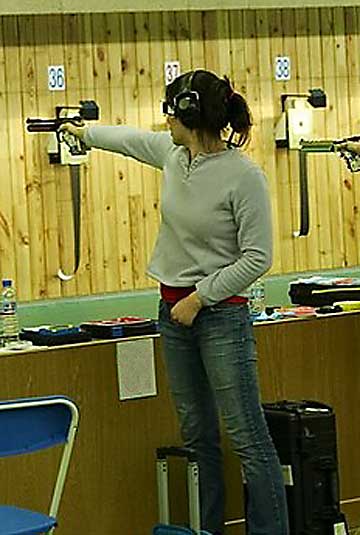 This woman shows the classic stance. Note the blue jeans. An almost universal 10-meter pistol champion’s uniform. No tight jackets here! Her other hand is anchored with a thumb through the belt loop – also pretty common. 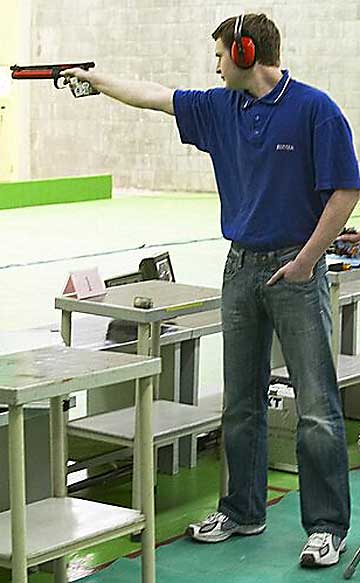 Tension your legs by turning your toes inward, starting with the left foot. Pivot on your heel, so your foot remains in place. Your stance will become more rigid as you turn the toe inward. Then, close your eyes and point naturally. Keep adjusting your foot placement and toe rotation until you’re pointing at the target naturally. Turn the right toe inward last of all. It adds tension to your stance, but it also throws your aim to the left.

Once you find your stance – stay put!
I can always spot the shooters I’m going to beat at a match. They’re the ones who keep moving around. One of our readers remarked several weeks ago how slow and deliberate 10-meter shooters seem to be. Well, that’s partly because once they find the right stance, they don’t move! I can take a new shooter and actually move his groups from side to side on the target, just by changing his stance.

Anchor your free hand!
The hand that doesn’t hold the pistol has to be still or it will affect the whole body. Either stick it in your pocket or hook a thumb through a belt loop.

With the right stance, it should be very difficult for you to miss the bullseye to either side. All you need to concentrate on is the elevation of the pistol, and I’ll cover that in the next report. Stay tuned!