Before we begin, a teaser. In about a week I will have an announcement for you 10-meter rifle collectors. I’m not talking about the new AirForce Edge rifle, although that will be coming soon, I hope. There’s another great new product ready to pop onto the market. For those of you awaiting the new RWS Diana rifle scope base, I’ll blog it soon. It should be on sale some time in June. Now, let’s return to those thrilling days of yesteryear and examine further my HW 55SF, with our eyes focused on the famous Rekord trigger.

Easy out
My rifle has been apart so many times in its life that I had it out of the stock in less than 5 minutes. The fact that it has just one forearm screw in the center of the forearm instead of one on each side sped things up. Once out of the stock, I was able to see the bridge that holds the two-piece cocking link close to the spring tube, allowing the stock to have a short cocking slot. 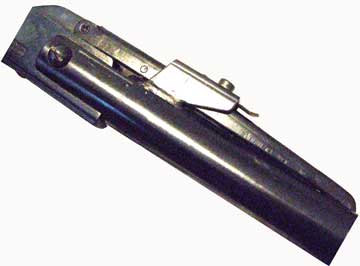 The two-piece cocking link works because it passes through the bridge that holds it next to the spring cylinder. This kind of cocking link is also quiet, because it’s always under tension.

I flipped the rifle on its back and the Rekord trigger blade stuck straight up. Just drift out two crosspins, and the trigger comes out as a unit. 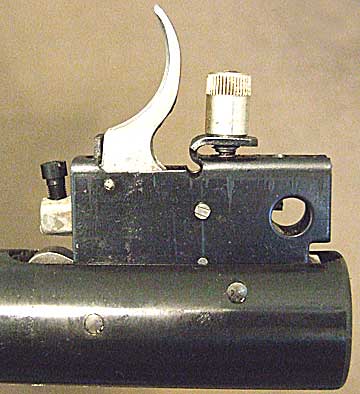 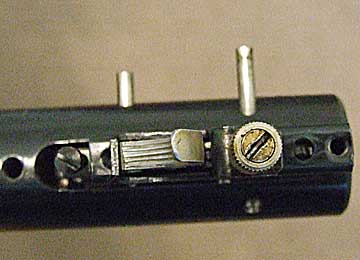 Top view of the two pins coming out. Here you can also see clearly that the aluminum nut behind the trigger blade is a locknut for the screw inside. 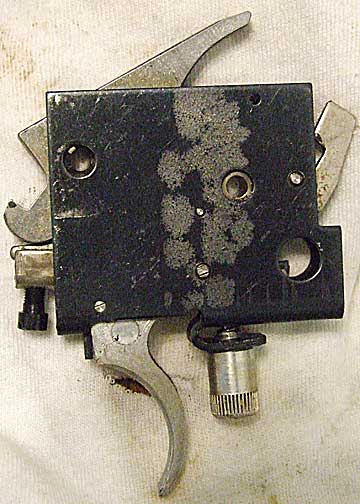 This is what a target version of the Rekord trigger looks like. It’s uncocked in this view. The large hook on the left is raised up and grabs the rear of the piston rod. The silver catch sticking out at the right of the trigger housing holds the spring-loaded piston hook in place. The hole at the bottom right shows the sear engagement, for fine adjustments.

The Rekord trigger is entirely modular. It can be cocked and fired by pressing down on the rear of the large hook, so it is caught by the sear hook. An inspection hole in the sheet metal housing lets you see the sear engagement on both the first and second stages. 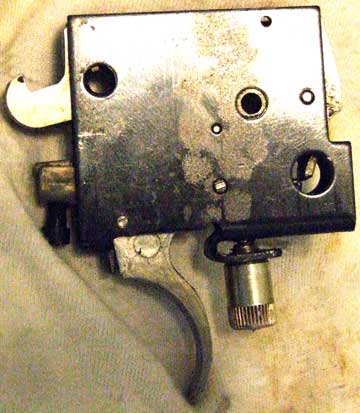 The trigger is now cocked. You can see the sear engagement in the hole at the lower right. 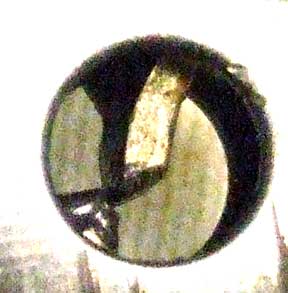 Here is the sear engaged with the trigger. The metal at the lower left rotates down as the trigger is pulled. When the sear is clear, it springs forward, releasing the piston hook.

No safety on the target version
The special target Rekord has no provisions for a safety. Safeties are uncommon on target guns to begin with, and the elimination of this one made for a lighter, more positive pull.

The common Rekord
The more common Rekord, in contrast, does have an automatic safety. This is the trigger found on the R7, R9, R1 and all the HW spring rifles except certain less-expensive models like the HW 25, some varieties of the HW 30 and the gas-spring HW 90. It’s the same size as the target version, but the rear of the sheet metal housing is cut out at the top for the safety. The target trigger will fit in the other guns, but it isn’t safe in them. 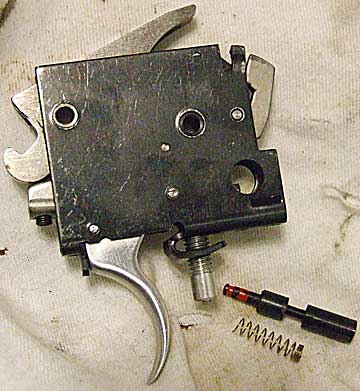 This standard Rekord came from my R1, the gun we tuned in the Spring gun tune series. Notice the screw behind the trigger blade is just one piece. Also notice the safety and safety return spring. That spring came from a ball-point pen, which is why one end isn’t finished.

New safety spring
While reinstalling the safety, I bent the return spring, so I pulled a ballpoint pen apart and made another spring in less than a minute. The Weihrauch safety spring is a bit on the weak side, and I like power in my springs to keep the trigger reliable, so I cut the new one long.

Reinstalling the trigger
The Rekord goes back into the action easily, as long as you know a few things. First, both types of Rekord like to be cocked before installation. Just press down on the back leg of the piston hook to cock the trigger. Second, remember that the longer crosspin goes toward the front of the gun. Finally, the safety goes in before the trigger. It must be depressed as you align the crosspin holes.

Reinstalling a Rekord trigger takes some time the first time around, but after you’ve done it several times it goes back in as fast as it came out. The only adjustments are the two I’ve shown you. The lubrication I’ll leave up to your individual tastes.