Today, I was supposed do a velocity test of the .25-caliber Walther Falcon Hunter, but I had some difficulties and damaged the breech seal while examining it. I’ve sent for a replacement and will get back on that series as soon as the rifle is operational again.

I’m attending the NRA Annual Meetings in Lousiville, Kentucky, Friday through Sunday, so I’ll ask you old hands to cover me on the answers to questions Thursday-Sunday. Pyramyd Air will have a booth there (booth number 2156), so please stop by and say, “Hi,” if you’re at the exhibit hall.

Instead of the Walther, I’m going to tell you about a remarkable airgun find I made at the Little Rock Airgun Expo last weekend. 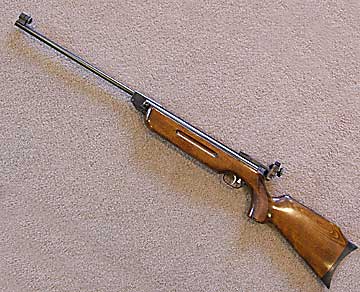 My SF 55 looks almost like an SM 55 except for the lack of a breech locking lever.

The rarest of the HW 55 guns?
I don’t know everything about airguns, despite what you may think. I get surprised all the time. Sometimes, though, I have to be dragged into a surprise kicking and screaming. This is one of those times. I have to thank my good friend Earl McDonald for strongly encouraging me to make the right choice this time, because I really wanted to go a different way.

I told you in the Little Rock report that the HW55 SF I bought was scarce (I believe I said super-scarce). Well, in the past week I’ve researched the rifle, and here’s what I’ve learned. 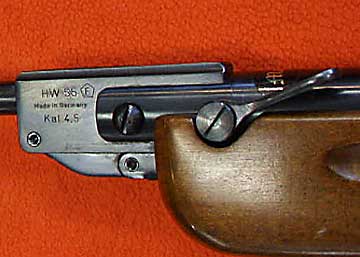 This is the traditional breech locking lever found on HW 55 guns. The “F” inside the pentagram after the model number indicates this rifle was intended for Germany, as it meets their legal limit of below 7.5 joules of muzzle energy. 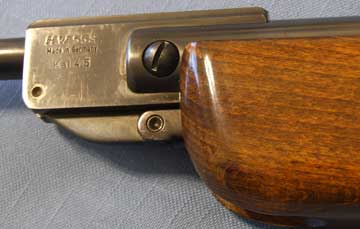 My SF model has no locking lever, and the stock is not cut for one. It’s difficult to read, but the baseblock says HW 55S. There is no freimark, because this rifle was intended for export.

When I looked at the rifle at the show I noticed it didn’t have a locking lever that is a characteristic of the HW 55 series. As far as I knew, all 55 guns had that locking lever. Well, my research shows they didn’t! I have discovered that the HW 55 model may have been released to the market by Weihrauch in 1956, not 1955 as I had initially thought. I also learned that the very first HW 55 guns were sold with non-Rekord triggers, something that someone on this blog asked about and I didn’t know.

At least as early as 1959, Weihrauch was offering the special models of HW 55 without the breech locking lever called the SF, MF and TF. I got that from a 1959 Weihrauch catalog that was posted by Mike Driskill on the American “Vintage Airguns” forum. Gaines Blackwell, another forum reader and avid HW 55 collector, posted photos of his TF for people to see – so it isn’t just a rumor. He knows of at least one other TF, so his isn’t one of a kind.

Gaines has owned a great many HW 55 guns, but the only F-series model he’s ever seen in person is the one he owns. He’s seen photos of 5 or 6 F-series guns. He says he’s seen and handled hundreds of HW 55 guns. I corresponded with several other HW collectors who had only heard of the F-series 55 guns but never seen even one example. So, this rifle that I was “forced” to buy turns out to be rarer than an HW 55 Tyrolean, which until now I had thought was the rarest of all 55s. It is also far rarer than the BF S70 that I wanted to get.

What IS a F-series HW 55?
The standard HW 55 that was made until a few years ago has a breech locking lever that must be flipped to break the barrel for cocking. The F-series doesn’t have that lever. It uses the spring tube from an HW 50, which is close to the same size as the 55, but has a conventional spring-loaded breech chisel detent. The standard HW 55 also has a very small chisel detent, but it isn’t as long or as strong as the model 50 detent because the rifle relies on the manual lever to lock the breech.

The lack of a breech lock is one clue to a rare F-series 55, but there’s one more important item to look for. The stock on the 55 F-series does not have the cutout on the left side that provides clearance for the locking lever. That is proof positive that the rifle is a true F-series and not just an HW 55 on which someone has installed an HW 50 spring tube, which would be easy to do!

How long were the F-series guns made?
I’ve established 1959 as positively the earliest date the F-series guns were made, but they might be even older. They may go all the way back to the first 55 guns. I’ll have to find earlier catalogs to prove that. For certain, the F-series was still offered by Air Rifle Headquarters in 1968, as they’re listed in the catalog. However, in the 1973 catalog, they’re not listed. The series seems to have ended between 1968 and 1973. If any reader has an ARH catalog from that intervening span of time, I would appreciate hearing if the F-series 55 is still listed. Beeman got his start after 1973, and there’s no mention of the F-series in his catalogs, nor does he mention them in the Blue Book of Airguns. It’s possible that Robert Beeman isn’t evan aware of the F-series HW 55 guns.

How old is my gun?
My rifle has a serial number of 264814, which puts it in the 1968-69 timeframe. According to the ARH catalog from 1968, the SF model lacked the aperture sight. It was priced at $64.50, while a 55 SM (same gun with the aperture sight and the breech lock) went for $78.50 and the Tyrolean-stocked model went for a horrendous $109.50. The guy I bought the rifle from had bought an HW 55 aperture rear sight for it because people kept telling him all 55 guns had them. He spent an extra $125 to make his rifle more desireable – and I STILL almost didn’t buy it! It’s supposed to have a Weihrauch sporting rear sight, so I may install one to bring it to spec. Or, I may leave it as it is, because I bought it to shoot.

How does it shoot?
The rifle came with a thick folder of past records of service and information about the entire HW 55 series. I love it when airguns come with stuff like that. I can tell this rifle visited John Tripier for a rebuild back in the 1999, and Randy Bimrose rebuilt it for a different owner in 2003. That’s way more work than a 55 needs, so I’m betting Tripier replaced the leather-seal piston with a synthetic seal piston. I’ll find out when I go inside for a look. According to the letter that was sent to Tripier with the rifle, the breech seal was completely missing when the rifle was sent in, and the gun made a grinding sound when cocked.

Velocity
The rifle now gets an average of 630 f.p.s. with RWS Hobbys, 614 with H&N Match, 637 with RWS Basics and 592 with JSB Match. That’s exactly where a 55 should be. I was concerned that one of the rebuilders might have installed a more powerful HW 50 mainspring that would take the gun up over 800 f.p.s., but that doesn’t seem to be the case. My concern is because of the special Rekord trigger that only the 55 series ever had – to the best of my knowledge.

I’m going to end this report here, because next time I want to spend some time looking at the Rekord trigger. Because we’ve received requests about the Rekord from other sources, I’ll expand that report to cover them all.