It’s been more than a month since the last installment, so it’s time to hit scopes, again. I’m starting a discussion about zeroing, which can be a large topic, so I’ll try to simplify it. If there are things I’m not addressing, please ask questions.

What range to zero?
Zero means the distance at which the intersection of the crosshairs coincides with the pellet in flight. Put simply, it’s where the pellet will strike the aimpoint.

Is that a new idea to you? Maybe you thought the pellet always strikes the place where the crosshairs rest. That’s not how it works. From the moment the pellet exits the muzzle, it starts dropping. To get the crosshair intersection to point to the spot where the pellet will be, we have to angle the scope to look downward. Most of the time this is done by using the scope’s internal erector tube.

The pellet starts to drop the moment it leaves the muzzle, as this simple drawing shows. The scale has been compressed. 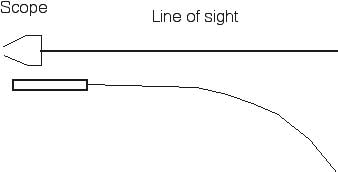 The scope looks straight ahead. The line of sight is a straight line. 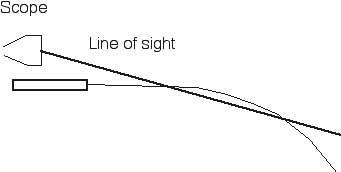 To get the scope to look where the pellet is going, internal scope adjustments must be used. Inside the scope tube, there’s an erector tube, which must be slanted down to get the line of sight to slant down like this.
I hope these three illustrations help you understand how the scope aligns to look at the place where the pellet is going. The scale of the drawings is compressed tremendously. A pellet may drop only 6″ to 10″ from the muzzle out to 50 yards. How far it drops depends on its muzzle velocity and its ballistic coefficient. Regardless of the BC, it isn’t very good, because all diabolo pellets are made to slow down rapidly.

Sometimes, the scope’s internal adjustments aren’t enough, and you have to shim the scope at the rear or use an adjustable scope mount to get it to look far enough down to align with the pellet. I’ll cover that kind of correction in a later report – for now, let’s assume the scope adjustments are all you need to do.

QUESTION: At what distance do you want the scope to coincide with the pellet?

That’s the biggest question in this game, and the most-discussed. I’ll try to simplify it for you. If you’re a general shooter or a hunter, you want the scope to be as usable as possible over the longest distance possible. That stands to reason, so you sight it in at the distance at which you get the most usable distance from the sight setting.

At what distances do you usually shoot? Most hunters and average airgunners shoot up to 50 yards most of the time. A 50-yard shot is a challenge, as is one closer than about 20 feet. Sighting-in at too close a distance makes no sense, because you won’t be zeroed for the greater part of your useful range. On the other hand, sighting-in for 50 yards also makes no sense, because at closer ranges you won’t be near the aimpoint! So, we have to find a compromise.

The compromise
Modern airguns can shoot very fast, but shooters who are serious don’t allow them to go as fast as they can. The most accurate velocity for a diabolo pellet is somewhere around 900 f.p.s. It may be 800 or it might even be 1,000 f.p.s. It all depends on the gun and its best accuracy with a given pellet. But, it certainly isn’t 1,200 f.p.s., and it isn’t 600 f.p.s. So we say 900 f.p.s., because we can work with that number.

For a pellet going 900 f.p.s., there’s a flat spot in the trajectory around 20 to 30+ yards. The line of sight has caught up with the dropping pellet, and the pellet isn’t dropping so fast that it’s a problem. Did you notice that the line of sight actually passes through the arc of the trajectory and then continues on below it? To the shooters the pellet appears to be rising. That first point of intersection is located about 20 yards from the muzzle, if you’re following my recommendations.

Why not 10 yards?
This question comes up a lot. Or, why not 15 yards? Because of what that does to the line of sight. If you sight in at 10 yards, at 20 yards your pellet will be an inch to an inch-and-a-half ABOVE the line of sight, assuming a 900 f.p.s. pellet. If you don’t care that it is so far above the point of aim, fine. Sight-in at 10 yards.

If you sight-in at 20 yards, your pellet will rise only a pellet’s diameter between 20 and 30+ yards. Where the far point actually is depends on the pellet’s actual velocity and BC. After it drops back to the line of sight, it’ll still be close to the aimpoint for several more yards. Twenty yards works out to be the ideal zero distance for the average airgunner, assuming a 900 f.p.s. rifle. Of course, 900 is just a convenient number; I’m really talking about anything between about 800 and 1,000 f.p.s.