Guest blogger
Vince Brandolini stirred up some interest in a previous blog when he talked about the energy he derived from certain spring guns. Many of us wondered how he calculated spring energy. Today, he shows us how!

When I mentioned a little while ago that I’d been calculating the potential energy stored in the powerplant of a cocked spring gun, there seemed to be some interest in how this information is derived. While there are plenty of shooters who don’t want to concern themselves with the mechanical nitty-gritty of their guns, others might be interested to know a little more about the heart of their weapon’s powerplant.

The function of an airgun spring is simple enough: it stores human-provided energy that is slowly put into it. At the shooter’s command, it releases it quickly. This is something a spring gun shares with the a slingshot or bow. The power that the gun imparts to the pellet is largely (although not completely) dependent on the capacity of the spring to hold energy.

Energy is another word for work, and we commonly express it in simple terms of force x distance. If you lift a 3-lb. weight two feet off the floor, you’ve just done 6 foot-pounds (ft-lbs) of work. When you cock a spring-piston gun, you’re putting a very fixed amount of work (or energy) into the rifle’s powerplant.

If the powerplant were perfect (a physical impossibility), that same amount of energy would be transmitted to the pellet. Unfortunately, most of the energy you put into the rifle ends up going to waste. How much is wasted depends on the gun’s efficiency. The higher the efficiency the more powerful a gun will be for a given cocking effort, or it will need less cocking effort for a given amount of power. Either way, high efficiency is obviously better. Knowing the efficiency of a given springer can be very useful information. In a way, it’s just like checking the gas mileage of your car. On one hand, it gives you an idea of how well the gun is designed; yet, on the other hand, it could alert you that the gun needs some sort of mechanical repair.

First, you have to calculate the energy stored in the powerplant. You’ll need to know four things about the gun and its spring:

The spring rate is usually expressed (in the US) in pounds per inch, and describes the amount of additional force required for every additional inch that a spring is compressed. For example, a spring that’s 30 lbs./in. (which, incidentally, is a ballpark figure for many guns) is normally 10″ long and requires 30 lbs. of force to compress it to a length of 9″. Compressing it further to 8″ requires 60 lbs., 7″ requires 90 lbs. and so on. The best way to determine spring rate is with a spring tester, which is a calibrated scale combined with a mechanism for holding the spring while it’s compressed to a certain length. A spring tester is a specialized (and expensive) piece of equipment. We can get around that by making some careful measurements.

To calculate spring rate, we need to know the following:

The modulus of elasticity doesn’t really vary that much from one spring steel alloy to another, so we can use a good compromise figure. It’s very important to measure the spring AFTER it’s been fired several times. New springs almost always take a set after they’re used a few times; that is, they shorten up. Measure a new spring for an RWS 48 and you’ll find something around 11.5″. Install it, shoot it for a while, yank it out and measure it again. You’ll find that the length is now closer to 11″. Shoot it for 1000 more rounds, and you should find that it doesn’t get much (if any) shorter than that. The vast majority of spring set happens within the first few shots

The number of coils is easy to determine but make sure that the closed end of the spring isn’t counted. 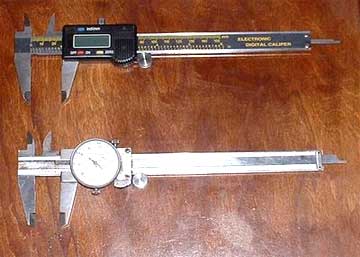 Calipers are available in an electronic version (top). I find them less reliable, but they’re generally cheaper.

For the other measurements, a dial caliper is required. Thanks to the Chinese, they can be had for very reasonable prices. The electronic one has become very common over the last few years, thanks in no small part to Harbor Freight, where they’re frequently put on sale for about $16. At that, they’re a terrific bargain. It’s not unusual to see other outfits selling the same caliper in the $30-40 range. However, and I learned this the hard way, they’re not perfect! They can drift. I had one that inexplicably lost about .005″ on the low end of the scale. That’s why I almost have a preference for the old-fashioned version, which, oddly enough, actually costs a bit more.

The OD of the spring has to be measured, and since the springs are usually not perfectly round, it’s a good idea to measure in several places to get an average. The wire diameter is measured with the dial caliper 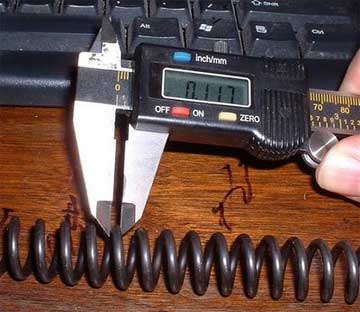 Measure the outside diameter of spring wire with a dial caliper.

When you measure the wire, MAKE SURE the caliper is NOT held parallel to the spring. It MUST be perpendicular to the wire itself! If it isn’t, your wire diameter measurement will be too great. Since wire diameter is extremely critical to calculating an accurate spring rate, this would throw everything off. When measuring, it’s best to slowly wiggle the caliper back and forth while maintaining pressure on the caliper jaw. Watch the readout while you do this and record the lowest reading. That’s your wire diameter.

The spring rate is calculated as follows:

All things being equal, a fatter spring is actually softer than a thin one, and one with many coils is softer than one with fewer coils. Notice how the spring rate goes up proportional to the wire diameter to the fourth power! As I said, this measurement is critical! A 10% error here will result in the calculated spring rate being off by 35% to 45%.

Once the spring rate has been calculated, the gun has to be partially disassembled. The rear spring retainer or anchor has to be removed, and two measurements have to be taken. The first is the free length of the spring. This is simply the length of the spring when it is out of the gun and with no pressure on it. A tape measure is adequate. Get it to the nearest 1/16″.

Measure the spring out of the gun to determine it’s full length in an uncompressed state.

Next, measure the preload (in inches). This is the amount that a spring is compressed when installed in an uncocked rifle. The easiest way is to start reinstalling the spring. Put the rear spring retainer in place, and measure the distance that the spring has to be compressed in order to reassemble the gun. Once the preload is known, the gun can be reassembled. 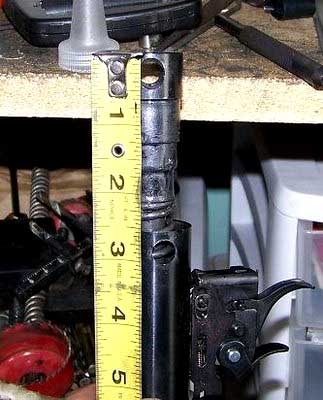 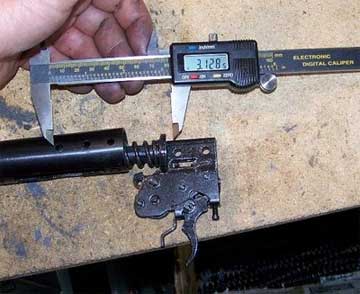 On this Walther Force 1000 (same as AR1000), I’m taking the spring’s preload measurement at the mounting pin holes.

There’s one last step, and you’ll read about that next Monday!