Now, let’s shoot!
The 499 is very light for adults and even for some kids. In the International BB Gun Championships, the coaches add weight to their kids’ guns based on how big the shooter is. I think the limit is 6.5 lbs. Someone asked about the weight earlier and I thought I’d already given it, but I guess not. At any rate, I shoot the gun at the stock factory weight and I do okay.

Use only the best ammo
I know you aren’t going to cheap out and try to use regular BBs in this gun, are you? Of course not! That would be like buying a new Corvette and trying to run it on regular gas. The best accuracy is only possible with Daisy’s Avanti Precision Ground Shot.

Load the gun
You load the gun by dropping a single BB into the large funnel-shaped muzzle. You’ll hear it roll down the bore to the magnetic seat, where it stops with a click. Once you hear the BB contact the magnetic seat, you may cock the gun. On some rare occasions I have not heard the tiny click that announces the BB is in position. In those cases, I wait about five seconds and assume the gun is loaded. Then I cock the gun without the audible confirmation.

Trigger
The trigger is single-stage and non-adjustable. Mine lets off at 2 lbs., 14 ozs. Coaches are known to work on the pull, but I don’t think they can do that much with it. It’s still going to be single-stage, which isn’t as precise as a conventional two-stage target trigger. But, it does work well with practice.

Firing behavior
Shooting the 499 produces a buzz that may sound cheap to most shooters, but hold your opinions until you see the results downrange. In a good shooter’s hands, this BB gun will keep all its shots on Roosevelt’s head on an American dime. A BB gun champion can keep them all inside this letter – O. 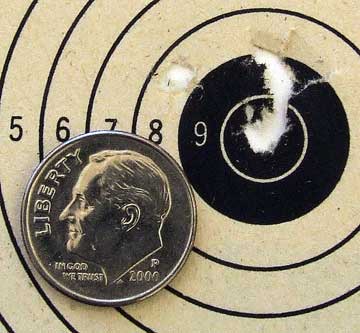 Not too shabby for a bifocal-wearing 60-year-old man who is definitely out of practice. Five shots offhand at 15 feet. The current rules provide for a slightly larger target positioned at 16.4 feet. A top shooter will keep them all in the 10-ring, which is the white inner circle.

One detractor
The one bad thing about this gun is the pistol grip. It’s nearly horizontal and it forces you to either put your fingers through the cocking lever, where there isn’t enough room, or to grab around the lever, which feels awkward. I would hope for a more vertical target grip with a cocking lever that didn’t get in the way.

Range and target
BB gun competition today is shot at 5 meters, which is 16.4 feet. That’s a change made to acknowledge a metric distance, rather than one measured in feet. Since it’s slightly longer than the 15 feet that used to be, the target was changed. The target is made especially for this kind of shooting, and it’s available from Pyramyd Air. The target works specifically with the gun, so this is another thing you need if you buy the 499. You’ll also need a good BB backstop, and the best one is Crosman’s model 850 Pellet and BB Trap.

Summing up
The Daisy Avanti 499 Champion is so much more accurate than any other BB gun on the market that there isn’t any comparison. It’s a gun made for a single purpose – to put its BBs inside the 10-ring of a 5-meter target. You don’t have to use it for that, of course, but buy the gun knowing that it was made to do just one thing. For training youngsters to shoot straight, develop personal discipline and perhaps grow up loving the shooting sports the way we all do, you can’t get a better start than with a Daisy 499.