Guest blogger
Lothar Kommer found a way to improve his QB36-2 and make it a good tool for eliminating pesky pigeons.

If you have a QB36-2 that works well but think it could be better, you’re probably right.

I first bought a .22 caliber QB36-2 to control the hundreds of pigeons that were living in my 200-year-old country house in Curico, Chile, because no other pest control method is as selective and precise.

Pigeons were 30-45 meters (35-50 yards) from the nearest point where I could shoot them, so an airgun had to be powerful enough to kill them.

Originally, I tried shooting pigeons with my Gecado 25 (Diana 25). During my first week of pest control, killing pigeons was easy. After they got wise to me, they moved further away, and the Gecado’s limitations became obvious. That’s when I got .177 and .22 QB36-2 underlevers, but I was still having problems taking pigeons further away. Obviously, I blamed the guns rather than my own shooting abilities!

After few weeks, both my guns had broken springs. Even though I ‘d never dissasembled an airgun, I had no problems except for the plastic spring guide and support in the .22 that was torn in four parts and some small plastic parts with no possibility of being reinstalled in the gun.

[Note from B.B.: Disassembling a spring gun can be dangerous. Mainsprings are compressed even when uncocked. Removing and reinstalling them without proper equipment and precautions can result in serious injury and even death. Do not disassemble spring guns unless you know what you’re doing and have the right equipment. You must also know how to safely reassemble your gun!]

Fnding a spare QB36-2 spring was a problem. The original had 50 coils, but I found only 36- and 40-coil Chinese springs. I used the one with 40 coils. Because it was short, I added some spacers to get precompression and to recover some power. At this time, I was convinced that the spring prevented me from getting the power I needed.

The spring guides and supports for both guns were modeled after the glued parts of the original and made from 1-1/4″ steel bar. Something I still don’t understand is why this part is made of plastic. It’s so cheap and easy to make from steel. Starting with practically nothing, it took me less than 30 minutes to do this.

After that, the internet became my most important source. I read lots of bad reviews about the QB36-2…poor quality, bad seals, low power, too heavy, dieseling, cut fingers, cracked stocks, bent barrels, etc. According to many airgunners, the only solution was to buy a B22 or B21, which are not available in Chile, so I got as much info as I could from the few good reviews.

Two tips made a lasting impression:

With that in mind, I disassembled one gun. Since it was my first time, the other assembled gun would serve as a model when it was time to put everything back together. I removed the piston and cylinder and deburred and polished both. Before polishing, I removed the rubber seal. While pushing the piston into the cylinder, I closed the transfer port with my finger. The air leaked between the seal and cylinder. I decided to replace the seal. Again, no spare parts were available, but Charliedatuna’s website suggested using rubber or an all-Teflon seal, such as a synthetic bottle stopper. It worked slightly better than rubber, but it still leaked a lot. I kept the seal’s thickness at 1/2″ and reduced the diameter of the non-working Teflon seal. The result was a 1″ diameter o-ring with 1/4″ thickness. 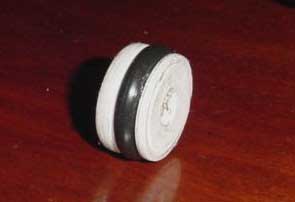 It wasn’t hard to install the seal, but I had to avoid cutting it when passing through the cylinder. Properly lubed, this seal had ZERO air leaks. It costs less than $2 and took almost no time to make. Since eliminating the air leak, my gun’s power increased.

The thickness of the Teflon seal support was gradually reduced, increasing the size of the air chamber until the back completely disappeared and the front became only a support for the o-ring. The more I reduced it, the more power I got from my gun. I also shortened the screw that holds the seal to the piston. The o-ring in the .22 is the first one I used. It has over 7,500 rounds through it, while the .177 has 4,000+ (and still looks new). 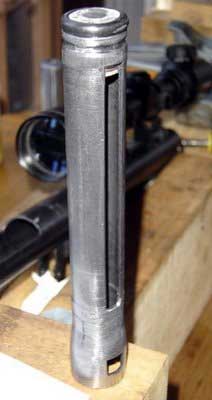 I wasn’t satisfied with the length of the piston, so I reduced it with a rotary grinder on the end with the seal. I took off about 0.5mm (about 2/10″) at a time, until the gun barely cocked.

Acting as a spacer and extra weight, a steel chunk measuring 3/4″ long x 3/4″ diameter (from bar stock) was put in the piston. [Note from B.B.: this is usually called a weighted top hat.] 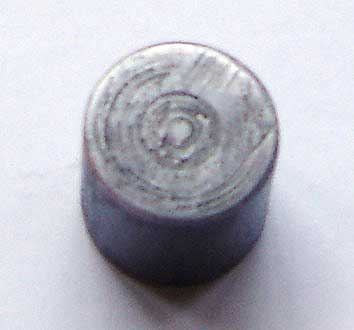 The piston DID break. Fortunately, the gun was pointed in a safe direction. I fixed it, and it’s back in action.

My broken piston was repaired and now works perfectly!