How about if I give you gun photographers something you can put to immediate use? Today, I’ll talk about the use of light. You already know to turn off the flash on your camera, but let’s see what you can do to light the subject.

Using available light
With film cameras, using available light was complex, because you not only had to know how long to expose the subject, you also had to know how the film you were using performed with a longer exposure. Every film was different, but as an example, the Ektachrome 64 I used had reciprocity failure. The longer it was exposed, the more the colors changed. To offset it, I had to use filters. But I also used filters for different types of light falling on the subject, and different variations of Ektachrome 64. It was very complex, so once I committed it to memory, I stopped looking for different films that could do the same thing. It’s kind of like finding the one right pellet for your gun, except that there was far more complexity.

Digital does away with all of that. The computer in the camera sorts out the type of light you use, so I find myself doing unforgivable things, like using florescent and incandescent lights for the same photo. Incandescent shifts colors toward the red and florescent shifts them to the green, but I no longer think about it.

I also no longer worry about having enough light. Back in my film days I could take up to an 8-second exposure, or I could hold the shutter open manually and count off however many seconds were needed. Today, the chip in my digital camera does that, and all I have to do is tell it how light or dark I want the picture to be.

Light tricks
I use house lights for most of my internet photos. If they put a hot spot on the subject, I will make a shadow fall on the subject to eliminate the bright spot. If I’m shooting a long gun for a magazine, where lots of sharp detail is needed, I shine two 500-watt quartz lamps at the white ceiling and let the reflected white light fall on the subject. My lamps are photo-grade lamps called Tota lights, and they adjust for height on tall stands that I run all the way up to 8 feet. That makes the reflected light as bright as it can be.

Get rid of shadowss
Before I had the Tota lights, I used to take most of my long gun shots outdoors. An overcast day is perfect, as it casts no shadows, but you can take wonderful shots on a bright sunny day, too. Just photograph in the shade. That tip, alone, is enough to change the way you photograph guns, if you haven’t been doing it. But wait – there’s more!

Choose the right background
Invariably, the classic mistake all new gun photographers make is to lay their guns on a white sheet. Because they can see the gun best that way, they assume the camera can, as well, but it can’t. It turns out you have a far more sophisticated imaging laboratory in your head than the finest cameras made. Lay your guns on a background that’s lighter or darker than then, but not by much. I’ll show you what I mean. 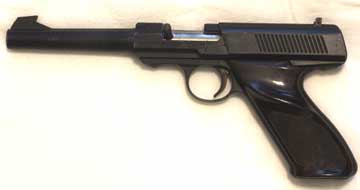 White isn’t a good background for a dark gun because it overwhelms the camera’s “brain,” making it think the picture is brighter than you want it to be. It’s like staring at a snowfield on a bright sunny day. It makes you squint and there goes the fine detail. 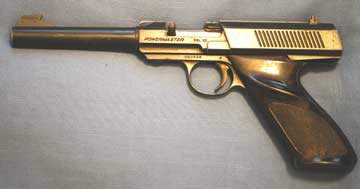 A medium blue background allows more detail to come through, but this picture is overexposed (intentionally) to show the damaging effects of direct lighting. It’s only marginally better than the first photo. I exposed both this shot and the first shot at the same manual setting. Although this background looks grey, it’s the same one used in the photo below. 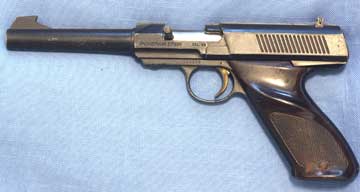 By allowing the camera to select the right exposure, you get a far better shot, even with direct lighting. Hard to believe all three photos are the same gun with the same lighting – florescent room lighting! Notice the shadow beneath the gun, indicating the light was not directly above the subject.

Now, let me show you what the image can look like when it is taken in indirect (reflected) light. This was taken with a single 500-watt Tota light bounced off the ceiling.

No hard shadow, more details pop and there’s not as much detail loss in the dark areas. Notice this is the only photo to clearly show the front sight pins.