Papers, please!
First, we’ll go over your homework. Your first assignment was to calculate the approximate average muzzle velocity of the Renegade in both single- and double-action. I didn’t give you any parameters other than the velocities recorded in that report. What I did with this problem was use the 42 shots I told you I would accept for the double-action mode. The range was from 916 f.p.s. to 975 f.p.s., and the average was 948.57 f.p.s. So, that was the average velocity that I got for double-action shooting.

Single-action
Calculating the single-action average was slightly more difficult, because I gave you only 12 acceptable shots to work with (the first and third strings of 6 shots), yet I told you I thought there were about 18 shots available. We’ll have to test that today to see if I’m right. To get the average, I added the first string and took the sum of the second string twice. Doing it that way makes a total for three stings of shots, even though one of them is just a guess. read more

Time for something different today. I reported on the Crosman 1377 in August 2005. In those days, my reviews were terse and filled with less test results than I provide these days, and the 1377 is such a classic air pistol that I thought it was time for another go at it. 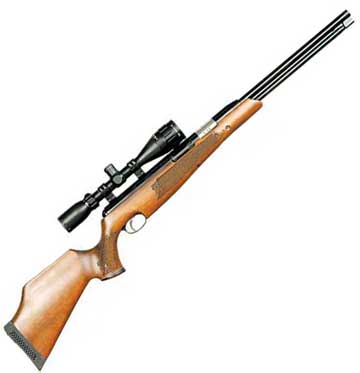 A TX200 Mark III underlever spring-piston air rifle is a treasure to be enjoyed for many generations.

Guest Blogger
Gino is a recent and satisfied owner of not one but two TX200 Mark III spring rifles. I’ve tested this rifle for you already, but this report comes from a new owner and a reader perspective. I thought it was an important viewpoint. Gino originally posted this as a comment, but it was so complete that I asked him if I could make it into a guest blog.

Bloggers must be proficient in the simple html that Blogger software uses, know how to take clear photos and size them for the internet (if their post requires them), and they must use proper English. We will edit each submission, but we won’t work on any submission that contains gross misspellings and/or grammatical errors. read more

Pyramyd Air is having a garage sale Saturday & Sunday, Sept. 20 & 21. If you can’t make it, have a look at their used products. However, the garage sale will have much more than just used products, so it’s worth attending even if you’ve got a ways to travel.

Lots of curiosity about the new Renegade repeater from Evanix. I told several who asked, and I’ll now tell everyone else, that the Renegade isn’t just a single airgun. This double-action trigger has been incorporated into four different airguns. The line includes the rifle I’m testing, a carbine version, a Takedown Rifle (TDR) that isn’t available right now and a pistol. I’ll test all of them for you. read more

The SIG Sauer SP 2022 was and still is very accurate. I’m not changing my mind about that. But, if you look at the targets, it shot low and to the left. The Tanfoglio shoots dead-center at the same 15 feet. After seeing where it was striking, I couldn’t resist shooting full magazines of 20 rounds at each target. Granted my groups are larger than those shot with the SIG, but look where they landed! read more

Assembly
Now it’s time to assemble and test the RWS Diana 48 with the Air Venturi Pro-Guide spring retainer installed. Because I removed the piston to photograph, I put it back in the gun first, but you normally wouldn’t take it out. So, the Pro-Guide system goes into the spring tube white end first. That’s the end with the guide inside the spring.

I mentioned in the last report that the Pro-Guide isn’t as long as the factory spring, so the trigger assembly also sits lower in the spring tube. Now the rifle is put back into the mainspring compressor again, and tension is put against the end cap shelf. As the tension increases and the end cap moves into the spring tube, it may twist so the pin holes in the cap go out of alignment with those through the trigger block and the mainspring tube. The trigger block will limit the twisting, but the black plastic end cap can get out of alignment just enough to make pin insertion impossible. read more 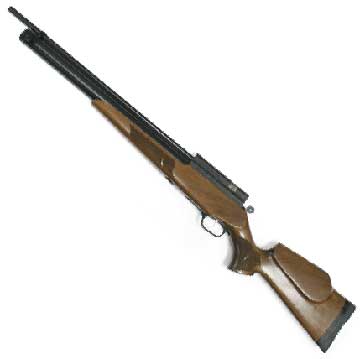 The new Renegade from Evanix is a double- and single-action 6-shot revolving rifle. Six quick shots as fast as you can pull the trigger!

Big series coming!
Starting a HUGE series for you today – a new and significantly different model line from Evanix with the ability to fire double-action as fast as you can work the trigger and more shots than we’re used to. This first standard rifle I will review is called the Renegade. Before we get to the juicy details, though, you need to know the history of the AR6 in America to appreciate how far it’s come, because the AR6 is the ancestor of all current Evanix models. read more