Not much of a looker. Most people would probably pass this one by. But it’s a wolf in sheep’s clothing – or at least it used to be!

You already know this is a small air rifle, yet a very powerful one for its day. The secret? A long-stroke piston provides more power by compressing more air. The drawback of such a design is a longer dwell time while the piston races down the compression chamber. Some shooters think that makes the gun more difficult to shoot accurately, but that’s where the artillery hold really shines. It doesn’t care about dwell time or anything else.

Let’s look at the rifle
BSF rifles can usually be identified by two swaged grooves at the end of the compression/spring cylinder. These are a mechanical way of attaching the cylinder end – the part that holds the air transfer port. The metal is polished and blued, but finish was never the strongest suit of BSF. They look fine, but don’t compare to the finish on guns like Webley and BSA. 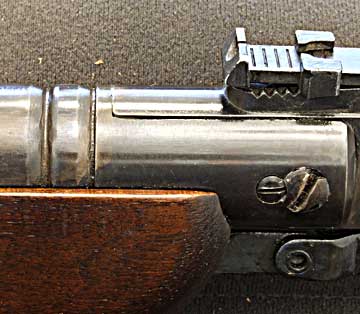 Those two grooves are the telltale mark of a BSF, no matter what name is on the gun.

The trigger
A BSF trigger is a marvel of manufacturing. One look at how it’s made and most of you would swear that the gun is nothing but junk. I know I did. The sear is actually made from thin steel plates riveted together to form a solid piece. In the days before CNC machining became affordable, this was a way of making steel parts cheaply. 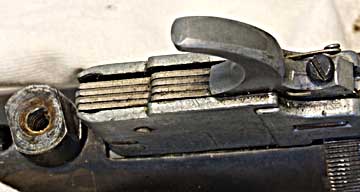 But it WORKS! Oh, how it works! Robert Law said these triggers are rough to begin with, but they eventually wear in to very smooth. That sounds like hype, but it’s the truth. The rifle I bought was well-used for about 30 years by its owner, whose brother told me he remembers shooting it as a kid. Now, the trigger is soooooo smoooooooth! When I cocked and loaded the gun for the first time, the trigger was set so light that the gun fired when I closed the barrel, so now I have a hole in the ceiling of my office. Thankfully I was pointing the muzzle in a safe direction when it happened!

I immediately adjusted the trigger to have greater sear contact. I also read in an ARH catalog that you should never adjust a BSF 55/70 trigger too light or this is exactly what will happen. The trigger adjustment worked as the markings indicate, and now I have a safe rifle with a delightful two-stage trigger that breaks with 2 lbs., 6 ozs. of pressure. 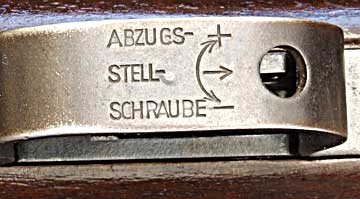 Maybe you can’t read German, but you’d have to be from Mars to not understand the trigger adjustment. It works, too.

My rifle averages 756 f.p.s. with H&N Finale Match, and holds that velocity within 10 f.p.s. It goes 763 with Gamo Match and 773 with RWS Hobbies – the lightest pure-lead pellet available for testing. Both of those are also very stable. Switching over to the trick pellets, it ranges between 846 and 891 with Gamo Raptors. Crosman Silver Bear hollowpoints deliver velocities from 991 f.p.s. to 1018. Now, who you gonna believe?

You’re going to believe the RWS Hobbys and put aside the foolishness of these ultra-light trick pellets, because if you don’t, I have a supply of 3-grain plastic pellets that can take the number even higher. This is airgunning, not who has the highest number. It matters what we can hit, not some meaningless number that can’t do anything. Sorry about the soapbox, but just imagine what would have happened if lightweight pellets had been available back in the 1970s.

Next time I’ll show some more detail of the rifle and we’ll see how she shoots.