Guest blogger
Converting CO2 guns to high-pressure air is becoming more and more popular, and .22 multi-shot has written a guest blog about converting his RWS 850 AirMagnum, which is a common conversion.

How to convert from CO2 to air
by .22 multi-shot

Why would anyone want to convert from CO2 to air? Well, I found out after purchasing a .22 caliber RWS 850 AirMagnum. It was everything I thought I would want – nice looking, good quality, reasonably priced and PCP features (many shots from one CO2 AirSource cartridge, 8-shot repeater). What else could you want? I ended up not fully satisfied. I wanted more power, and the power decreased more than I expected in cool weather.

Simplest conversion
I did like my RWS 850 and noted from B.B.’s blog that air has some advantages over CO2. So, I decided to try a CO2 to air conversion. There are couple of simple ways to convert a CO2 gun to air. The easiest is to use a paintball remote setup to connect an HPA tank to your airgun (see glossary below for definition of paintball terms). This is the setup I started with. I bought a paintball remote, HPA tank and AirSource-to-ASA adapter. 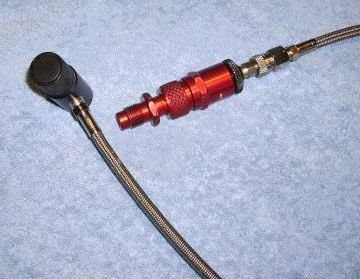 Test results
The conversion using the paintball remote was tested using JSB Exact Jumbo pellets. Pellet speed ranged from 591 fps up to 602 fps. The average was 594 fps (12.38 foot-pounds). That makes this conversion equivalent to using CO2 on an 80-90F degree day. The HPA tank I used had a regulator with an output pressure of about 800 PSI. One advantage of this setup is that it’ll give you the same power even when it’s colder.

Going further
I’m sure some of you will want to go further, like I did. I didn’t like the remote setup because it was clumsy, so I worked on putting together a setup that’s part of the gun. The pictures below show two other setups I built. The last setup in these pictures will be my permanent setup along with other modifications. Some other things you can do:

Be careful. There can be side effects from these modifications. If you go too far, you might run into valve lock or the valve stem might bottom out when the hammer strikes. The valve of a CO2 gun is designed for CO2, so there will be limitations on what it can do.

Below are some pictures of different setups and the parts used. 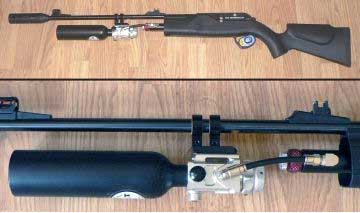 HPA setup with Smart Parts Max Flow Inline adjustable tank regulator. This setup connects via macroline to a complex adapter with a bleed valve. The tank is a 3000 PSI, 13 cubic inch tank. I discarded this design. I didn’t like the look, and it was too complicated. 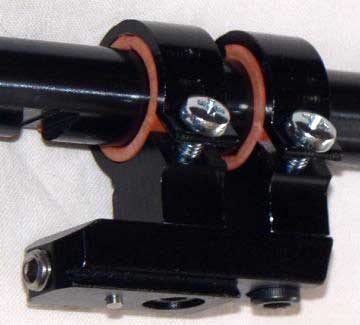 Tank mount made out of scope mounts from an inexpensive Daisy scope. The bottoms were cut off, drilled and threaded, then a paintball rail was screwed into them. I later discovered that 1/2″ PVC conduit fits nicely over the RWS 850’s barrel, and the scope mounts fit over the conduit. The reddish stuff is rubber gasket material. 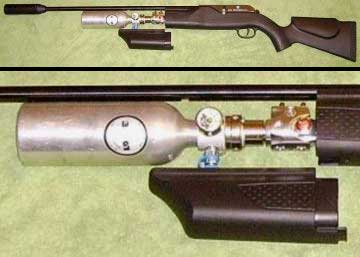 The HPA setup with screw-in style Nitro Duck X-Stream adjustable tank regulator attached to a System X On/Off ASA. This is connected to the RWS 850 through a homemade quick-disconnect-to-AirSource adapter. For this style of setup, the ASA needs 1/8 NPT output port opposite where the tank screws in. The tank is a 3000 PSI, 1.5 cubic foot scuba tank. This is the style I’ll use for my final setup. The stock cap will be modified to hide the regulator and ASA, and the tank will stick out.

Homemade AirSource-to-quick-disconnect adapter. That thing sticking out the side is an 1800 PSI burst disk. Don’t copy this design. The hole isn’t deep enough for the burst disk to screw in and seal well. 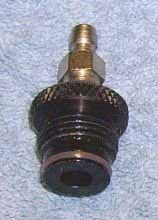 Key part for the setup above if you use standard parts. This screws into the AirSource-to-ASA adapter and makes it an AirSource-to-quick-disconnect adapter. Different stores have different names for it. Some of the names I’ve run into are C/A-to-1/8″ NPT, C/A-to-1/8″ plug, ASA-to-hose and ASA-to-remote.

Think before acting!
If you want the features of a PCP (pre-charged pneumatic) airgun but are trying to save money by buying a CO2 gun, just buy the PCP rifle! You’ll save money in the long run and will probably be more satisfied. If money’s an issue, check out the Benjamin Discovery. It’s very reasonably priced, especially bundled with the hand pump.

Here’s an idea of the cost of some tools you probably would end up buying if you get very deep into modifying your airgun. You may not need all these tools immediately, but they’ll add up bit-by-bit!

Remember, be safe. Working with high-pressure air can be dangerous. It can kill you!

Resources
When I started work on this project, sources for AirSource-to-ASA adapters and small HPA tanks were difficult to find. Below are some other modding resources.

66 thoughts on “How to convert from CO2 to air”