I’m driving back from the airgun show in Roanoke, Virginia, and am reprinting this article from Airgun Revue #1. It was just a filler when I wrote it for that magazine, but it turned out to be very popular with readers. Apparently, shooters new to airguns and even seasoned shooters don’t always fully understand terms many of us use every day. I hope you find this two-parter helpful. 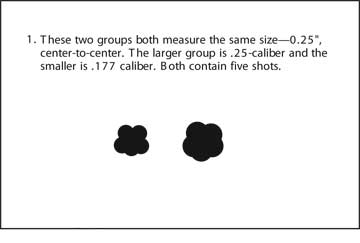 1: Center-to-center
The most popular way to state group size these days is a measurement of the extreme spread of the group, measured from the centers of the two most distant holes. The measurement is called center-to-center. As with many measurements, this requires some explanation.

Using this method, a group size of 0.0″ is theoretically possible.

Although the measuring process requires one additional step (see No. 3), this is the most widely used method because it gives the smallest-sounding group size. 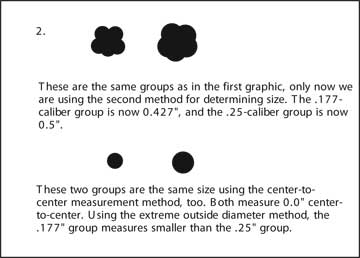 2: Extreme size
Another method for measuring group size is to measure the extreme spread of the group across the widest dimension of the hole. Doing it this way, all groups of a certain size (e.g., 1/2″) will be the same size, regardless of the caliber of the pellets.

It is impossible for group size to be smaller than caliber when this method is used. The method is not as popular as the first method because group sizes will always measure larger. 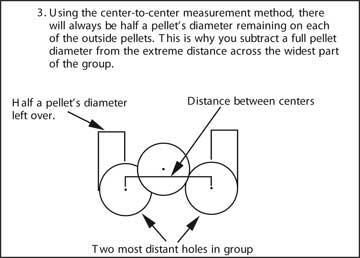 3: Center-to-center measurement
To measure group size using the center-to-center method, measure the length across the widest group dimension and subtract a pellet diameter. See the above graphic for details. 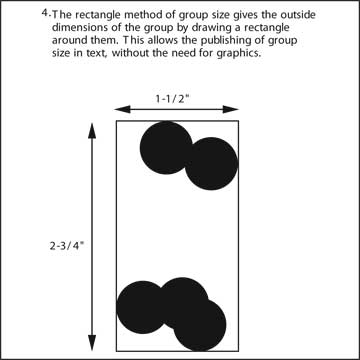 4: Boxing the target
An archaic measurement method is to give the outside diameter of a rectangle in which the group fits. This was used in the 19th century and the first part of the 20th century, but it has fallen out of favor. It was useful in the regulation of both barrels of a double rifle, but no one uses it for anything today. 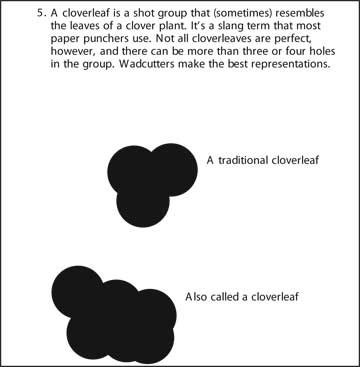 5: Cloverleaf
A cloverleaf is a specific type of one-hole shot group in which the shots overlay one another, yet the diameters of each pellet (or most pellets) can still be seen. This is best seen when using wadcutters.

I’ll finish up on Tuesday.