Reminder: Pyramyd Air’s tech support department will be closed until Monday, Oct. 27, when they’ll return from the International Airgun Expo in Roanoke, Virginia.

Kevin asked for this report. He was interested in all the vintage guns I report on and wondered if there are any airguns offered today that I consider to be time-capsules…classics that capture the present age of airguns and guns that will hold their value in the coming years.

As an example, a Feinwerkbau 124 was such a gun in the 1970s through the ’90s, and we knew it at the time. You can still get used 124s, of course, but I sensed what Kevin wanted to know is if there are any guns being sold TODAY that belong in the classic category. Here goes.

The Beeman R-series guns are all classics, but two stand out. They’re the R7 and the R1. Both rifles are probably in their last decade of production (just a guess…I have no inside information), and either one will become a treasured collectible after they stop being made. The R7 is probably the most desirable of the two simply because it’s so petite and fun to shoot.

These Weihrauch breakbarrels have the desirable Rekord trigger and the American-style stock, making them the most western-style classics in the Weihrauch line.

The Beeman P1, which is also the Weihrauch HW45, is a classic air pistol. I have no idea how much longer it’ll be made, but it’s never been cheapened, so the gun you buy today is the same as the gun bought in the 1990s.

The Beeman HW77 is another Weihrauch classic. It was originally supposed to have become the R1; but with the power Robert Beeman wanted, the weight shot up to 11 lbs., like Steve Vissage’s rifle, so Weihrauch had to scale it back to the smaller rifle you see today. It was the king of all springers until the TX200 came on the scene.

The TX200 in any configuration is a classic. Whether you have a first model, a Mark II or the current Mark III, you’ll never make a mistake owning a TX200.

Any model Whiscombe air rifle is money in the bank. Right now, it’s in the high interest-producing category. I paid $2,300 for my four-caliber outfit a decade ago, and today I wouldn’t sell it for $5,000. John Whiscombe has ended production, but there are still a few guns being delivered, so there’s a slim chance of getting one.

A Quackenbush Outlaw Long-Action big bore rifle is a sure bet to double your money at the present time. Dennis will never cheapen the product, and, when his order book opened last Saturday, he filled his 50 orders in two hours. I know a guy who buys one for $700 each time the book opens and resells it for $1200-1500. Dennis may bring one or two speculative rifles to the Roanoke airgun expo that starts today, but they’ll be gone in a few hours. 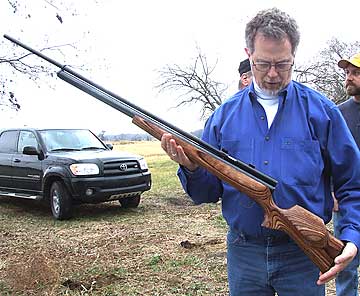 Examining a Quackenbush .457 long-action with a special-order long barrel.

The .457 Quackenbush is a PCP, so where are all the smallbore PCP classics? Are there classic PCPs among the vintage guns? Those who own certain models will argue that they deserve classic status, but the truth is that there aren’t very many true classic precharged pneumatics. I believe the reason for that is the simplicity of the design.

A PCP is just a hollow tube with a valve connected to a barrel. One gun is a lot like all the others. To argue that a Daystate is better than an FX is to argue Chevys and Fords. Yes, Daystate has an electronic firing module, but that keeps it from becoming a classic in my opinion. Any rifle whose future depends on a reliable source of electronic boards is doomed to early obsolescence. If I were forced to nominate one PCP to the status of a classic, it would be the Falcon FN-19 rifle because of its rock-simple technology and utter reliability.

In January, Daisy will offer 1,000 replicas of their first 1888 BB gun. An original wire-framed Daisy BB gun sells for $3,000 and up. The replica’s price hasn’t been announced, but I expect it will be under $400. They will sell out in about 2-3 weeks, then the price will immediately double. After that, it should climb to a thousand pretty fast.

Remember, this is just my opinion. I’m not advising anyone to make any investments. While I don’t own an R7 that I say is the top breakbarrel classic, I do own and enjoy a CZ 631 that I didn’t include. It’s the same for the PCPs. I don’t own a Falcon FN-19, but I do have a prototype Benjamin Discovery in .22 caliber that I treasure, along with a Talon SS and a Condor. So, the list is not just the guns I own.