This one is for Airdog.

Spring-piston airguns are one of the newer types of powerplants, coming into being about 1840. The first spring-piston guns were long guns that used volute springs instead of helically coiled springs to drive the piston. Take your belt and wind it into a tight coil on a flat surface like a table. Then pull on the center of the belt and it will rise, creating a conical spiral. The flat belt will now be an elongated spiral with a wide end and a narrow end. That is the shape of a volute spring.

Instead of leather, the springmaker starts with a flat steel bar that he winds into a flat coil, just like the belt. The last move is to stretch the spring by pressing the center upward. Once it takes that form, it’s hardened and becomes springy. 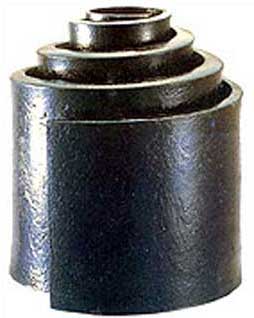 Volute spring started out as a flat steel bar.

You wouldn’t think springs made that way would be very good, but they are. The suspension of an M60 battle tank relies on volute bumper springs as the final shock absorbers–for the time when those 61 tons come crashing down to the end of travel for its main torsion bar suspension. So, volute springs can take a lot of stress! To make them longer, they’re sometimes placed in line, and the double volute spring is a most common type found in antique airguns. 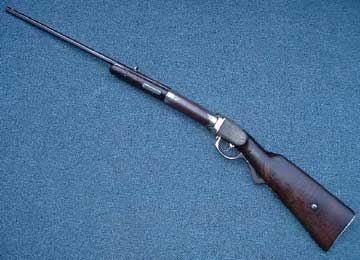 This Buegelspanner, or “triggerguard-cocker,” is a common pattern airgun made from the 1850s to the 1890s–maybe later. It uses a double-volute mainspring to power the piston.

By the 1870s, coiled steel or helical springs were being used in Quackenbush and some German spring-piston airguns. Up to this point, all the guns used a flat leather seal on top of the piston. The guns were not very powerful and velocities ranged between 200 f.p.s. and 400 f.p.s. The diabolo pellet was still over three decades in the future, so darts and solid lead slugs were the projectiles used. 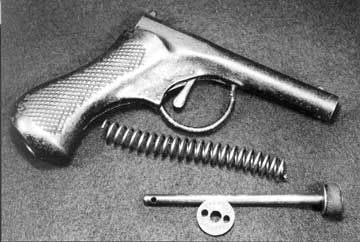 1872 Haviland & Gunn spring-piston air pistol my wife bought for $5 at a local flea market. It shows the typical arrangement of the powerplant that was housed in the grip. 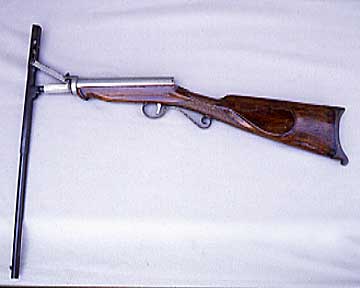 Air RIFLE!
Up to the year 1900, airguns were chiefly smoothbore. So, the long guns are correctly called guns and not rifles. In 1905, the Birmingham Small Arms company, better known today as BSA, decided to add airguns to the firearms they had made for almost a half-century. They decided on a design created by Lincoln Jefferies–an underlever that was loaded through a rotating tap. The barrel was rifled, and the first guns made were called H The Lincoln air rifles. They were made for Jefferies, but BSA wanted to make more rifles than Jefferies could sell, so they worked out an agreement whereby they could also produce the model under the BSA name.

The air rifle that started it all was made by BSA in 1905.

This was the first modern spring-piston air rifle, and all that have come since have used design details that were present in this first gun. Within a very few years, the first diabolo pellets were being sold and increased the accuracy of the new air rifle dramatically. In that day, it was considered a wonderful thing for the air rifle to group five shots in one inch at 50 feet.

From 1905 until 1980, the spring-piston gun continued to improve in velocity and to get synthetic piston seals, but not really to change in a dramatic way. Then, another significant change was introduced.

Major innovation: the gas spring
I’m not certain of this next part, but all my research indicates that the Argentine company that makes Shark airguns was the first to put gas springs into spring-piston rifles in the early 1980s timeframe. Very soon thereafter, Theoben of the UK rose to dominance with a complete line of refined gas-spring rifles. Some of those Theobens set velocity records when they first came out. Vortek, an American company, came along in the late 1990s with drop-in gas spring conversions for several popular rifles.

Not an innovation but a perfection
In the mid-1980s, Weihrauch brought out the HW77, which quickly rose to fame as the No. 1 field target competition rifle in the UK. Aftermarket tuners did a hundred tricks to improve the already fabulous action of this fine underlever, until it was thought to be the pinnacle of spring-piston airguns. And, then, Air Arms upstaged it.

The TX200 was all that the HW77 was, plus it had something the German rifle didn’t–a concentric barrel-piston axis. With that one innovation, the humpbacked underlever shot ahead of its Teutonic rival to become the best spring-piston air rifle the world has ever seen…except for the guns of John Whiscombe.

The Air Arms TX200 was the most advanced spring-piston gun when it came out in the late 1980s, and it’s still a leader today.

Whiscombe and Park
Working quietly in his shop, Whiscombe has been turning out handmade spring rifles for several decades. His guns are underlevers with a difference. They have dual opposed pistons that come together like the clapping of hands. When they do, their force is cancelled, giving the rifles a trace of vibration but no recoil. Perhaps they represent the high-water mark of the spring-piston evolution. A decade ago, another maker called Park attempted to put the dual opposed piston into semi-production status, but they didn’t last too long. Their rifles are very smooth and recoilless, but cost considerably more than a TX200 during their production years.

What comes next?
Where we’re headed is anyone’s guess. The current trend for ever-faster rifles is hitting a wall, but the sales are so brisk that makers won’t stop competing for top honors anytime soon. Oddly, no spring-gun maker in the world has seen the one niche in the market where there’s no competition at all–the smooth-shooting plinker. Thirty years ago, there were plenty of easy-cocking plinkers on the market, but they’ve almost vanished. Gamo has the makings of one in their Whisper, but they don’t know what to do with it. So they sell it on the basis of velocity and the “silencer” on the end, ignoring the attributes of light weight and easy cocking.

The Chinese are poised to make a perfect plinker, but they’re so focused on everything Europe is doing that they’ll never be able to get out of their own way. Therefore, the Chinese-made Hammerli 490 will continue to have a heavy trigger and lose sales from an adult market that laments the passing of the Diana 27. Mendoza is also close with their RM-200 rifle, but they don’t understand the importance of easy cocking.

And the HW30/Beeman R7 has priced itself right out of the market it is so perfectly created to dominate. I think the next big thing in spring-piston air rifles will be the return of the accurate, easy-cocking plinker. It’s a gun that never should have gone away, but the velocity wars have obscured its importance.

Said differently, for every R7 that’s sold, Daisy sells a thousand Red Ryders. Not that the Red Ryder is what people want, but the idea of a light, convenient airgun is universally appealing.

76 thoughts on “A brief history of spring-piston airguns”