This review has been a long time coming. I’m doing this for our rocket scientist, Jane Hansen, but several others have talked about this rifle, as well. 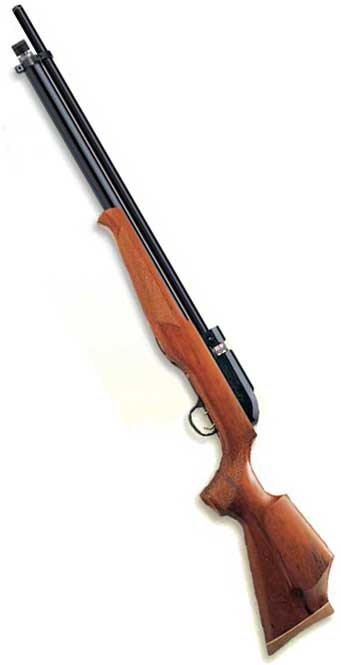 Career Infinity is a large precharged repeater. Powerful yet light, it should be a good hunter.

The Career Infinity is a six-shot repeater that comes in both .22 and .25 calibers. The website lists the power in .22 as a peak of 40 foot-pounds, but also lists a velocity peak of 1220 ft. sec. That doesn’t quite work out, because that velocity equates to something in the over-50 foot-pound class. So one thing I will do in this series is discover what the numbers really are.

The action is a sidelever that cocks the rifle and advances the cylinder to the next pellet. It also operates the bolt probe, which feeds the pellet from a chamber of the cylinder into the breech of the barrel. This is a different arrangement than the other Korean precharged rifles I’m familiar with. No air passes through the cylinder. In fact, each chamber has a hole drilled to the outside, so air cannot be contained. Therefore, the air has to come through a transfer port in the breech. That means a couple of novel things to the shooter. 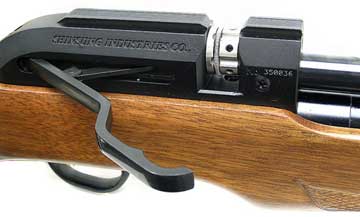 Short sidelever cocks the action, advances the cylinder and pushes the next pellet into the breech.

First, the Infinity cylinders are easy to insert in the gun. Because they don’t seal air, their tolerances are much more relaxed and cylinders snap in and out quickly. Second, these cylinders are loaded from the rear. That’s an important thing, because a diabolo pellet is always larger in the skirt than at the head. With other Korean rifles that use cylinders, you always worry if the skirt will fit into each chamber. I’ve remarked on this in tests of other guns. With the Infinity, you push the pellet in from the rear; so if it’s a little out of round, it’ll be squeezed down to shape as it goes. Believe me, that’s much easier. 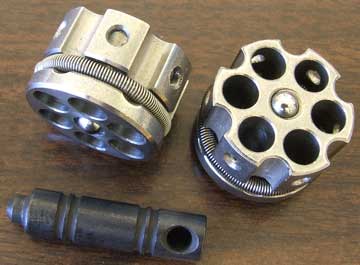 Infinity cylinders (two come with every gun) load from the rear and do not pass any air. Spring around the rear snaps into wasp waist 0f pellets, holding them in place. Pellet seater/sizer at the bottom also comes with the rifle.

Very light!
The owner’s manual says the rifle weighs just 6 lbs. I weighed mine and found the Pyramyd Air specifications were closer at 6.4 lbs. My loaded rifle weighs just over 6.5 lbs. Still, that’s very light for the size of the rifle. It’s the same as an AirForce Condor.

Styling
You’ll have to decide if the style of the rifle is for you. Shinsung has come a long way since the days of the gold bas-relief panels on their shotgun-style rifles, but the Infinity is anything but conventional. The schnabel-tipped forearm contrasts sharply with the bulbous receiver. However, the wood appears to be a form of walnut and the coarse checkering is hand-cut–something you don’t see anymore.

The high comb elevates the eye of either a righthand or lefthand shooter equally well. Since there are no open sights, you need this elevation to find the scope. There’s no cheekpiece, and the pistol grip is symmetrical so the stock is ambidextrous. Of course, the cocking lever remains on the right side of the receiver with no possibility for alteration, but besides that, the Infinity is usable by shooters of both persuasions. The safety is a strange gold button inside the triggerguard. It’s not automatic and can be taken off and put back on at any time.

The rifle mounts easily to the shoulder, but when I hold it comfortably, the muzzle is elevated. I’ll see how that affects the gun once it’s scoped. The trigger blade is quite short and curled. It feels strange.

Power wheel
A power wheel under the receiver has 12 setting for variable power. Since the number of shots at full power is about one cylinder according to the testing done at Pyramyd Air, I’ll be searching for the setting that gives the best combination of power and total shot count.

A manometer (air pressure gauge) located on the bottom of the forearm tells you where the reservoir stands at any time. It reads in bar, only, so 200 is the top fill level. The front fill port is covered by a Delrin cap that has an o-ring to seal out dirt. That’s a good, safe design for a PCP.

I have a good feeling about this rifle. Can’t wait to see what it can do.