Let’s look at the rear aperture sight in the AirForce sight set, which is the item of greatest interest in this set. There isn’t anything like it in its price range. Let me show you.

The sight base clamps to conventional 11mm scope base dovetails. There’s no scope stop, but I didn’t need one when I tested the sight.

The entire sight is clamped to a vertical post on the left side. Like the front unit, this aperture has a broad range of gross vertical adjustability. And that’s before the adjustment knobs are used. It was very easy to match the height of the rear sight to the HW55 target rifle I tested it on, and it was using the rifle’s own front sight. 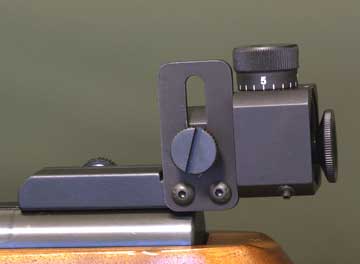 The rear apertuire sight adjusts up and down on a vertical stalk for gross adjustments. Production sights will have a scale on the stalk.

The click adjustments are 1/8 minute of angle, which is half the distance found on current plastic sights. Shooters will be able to move pellets around the target by hundredths of an inch. Certainly, they’ll have more control over where they’re sighted than is humanly possible to use, which is reassuring for a competitor.

I counted the number of clicks up and down and side to side. There were 245 clicks from one side to the other and 254 clicks from top to bottom. That works out to just over 30.5 minutes of horizontal adjustment and 31.75 minutes of vertical adjustment. 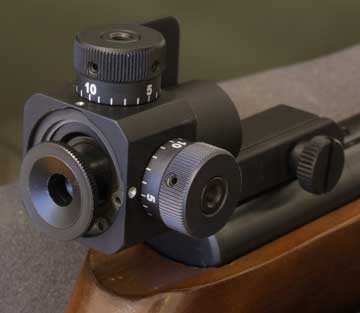 Both adjustment knobs have scales for repeat settings. The eyepiece interchanges with aftermarket accessories.

Clicks felt more than heard
The clicks are more tactile than audible and can easily be felt throughout the entire range. They never became harder or easier to adjust at any point in the test, all the way to lock at both ends of the range. The knobs were easy to turn, but stopped positively in every detent, so there’s no chance of accidental movement.

Shooters will want some kind of sight movement directions on the knobs that were not on the pre-production prototype I tested. A simple arrow that indicates one direction should be sufficient for each knob.

The knobs do have index numbers around their periphery. A dot for each knob is located on the sight body to be used as the point of reference. These are the smallest adjustments that will be made after all gross adjustments have gotten the rifle in the black.

And the function?
This new sight is a positive step forward from the plastic aperture sights that come on youth models today. It has sharp, positive adjustments with no backlash or slop. I’ll show that in a moment.

Compared to the expensive target aperture sights, the AirForce sight feels less crisp. I think that’s because the clicks are less audible, yet on target paper this sight is just as positive as any of the big boys. The broad range of movement gives you a sense of security, knowing that once you’re in the neighborhood, you’ll never run out of adjustment.

I discovered that my Gehmann adjustable aperture fits the same hole as the removable aperture disk. And AirForce may bring out a range of apertures for shooters to adjust to different lighting conditions.

Let’s test
Whether testing a scope, dot sight or an aperture like this one, there is one way to positively determine whether the click adjustments are precise or not. That is to adjust the sight in a box pattern and see where the final shots go.

I used Wayne’s HW55 Tyrolean for this test. Only the rear sight was on the gun, as the barrel lacks 11mm dovetails for the front sight.

Begin by making a group at some spot on a target. It doesn’t have to be centered on the 10-ring, but that does add visual effect. Then, turn one of the adjustment knobs a specific number of clicks to the side, then up, then to the other side, then down. The last group should land exactly on top of the first group. If it does, the sight is returning to the exact same place after being adjusted away.

After the first three shots, I adjusted the sight 40 clicks to the left and fired a second group. The distance to the target was only 10 meters, and these are 1/8-minute clicks, so 40 isn’t as big a move as you might think.

The final group of three shots were then fired. If you’ve followed my directions and if the sight adjusts with precision, it should be back where the test began and the last group should fall on top of the first. 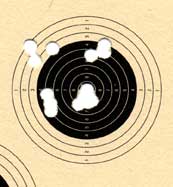 First three shots in the center of the bull. Then 40 clicks left, followed by 40 clicks up, then 40 to the right and finally 40 down. The last three pellets went on top of the first three.

As you can see, my last group of three shots did fall exactly on top of the first at the center of the bull. The upper two groups are more open than the bottom two, which is due to my own shooting error, but the sight tracked the way it was supposed to. So, this sight works as advertised.

The bottom line
I’ve been waiting for a sight set like this for more than 30 years. Ever since the days when Air Rifle Headquarters and Beeman sold expensive target rifles without sights, starting back in the 1970s, I’ve seen too many great airguns sold sans sights. Sure, the initial buyers saved a few bucks and it was possible to use small scopes on them; but when someone wants to put one of these vintage beauties back into serious service today, they’re always shocked by the $400-$500 cost for a new set of precision sights. Until now, the only alternative has been the inexpensive sights used on youth rifles.

Now, thanks to AirForce Airguns, you can afford to put a real target sight set on your heirloom rifle. And because this sight is budget-priced, it qualifies as a Sporter-class sight, so competitors can give their target rifles a new lease on life. Best of all, this one is made in America!