I just got a Walther Lever Action air rifle. Long-time readers of this blog may remember that B.B. wrote a three-part review of it back in June 2008. I can’t improve on that review. Read his if you’re interested in this gun and then come back to mine. All I’m doing is adding my personal impressions to his detailed description.

It almost feels like Christmas again
The package was delivered today from Pyramyd Air. It was over $150, so shipping was free. Because it included CO2 (40 cartridges!), they shipped it ground. Besides the gun and CO2, I also ordered some pellets and Pellgunoil for the rifle. I was all set to wait for the five-day delivery, but it arrived in two. My heart rate has increased at the anticipation of opening the package!

First, I slid the gun boxout of a protective cardboard box. A box within a box within a box. Cut tape here, cut tape there, now the box is opened…and there it is. What a remarkable replica! Dark wooden stock and black receiver and barrel. Looks like a Winchester 94 to me. Very pleased! 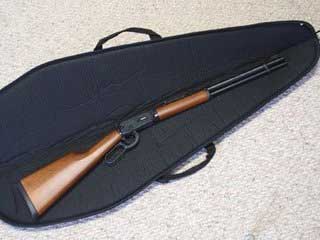 Here’s a picture of the rifle if you haven’t visited B.B.’s review yet.

Let’s savor its externals before going to work
Picked the gun up. Seems smaller than I fantasized. Like movie stars when you see them in person, they don’t look as big in real life as they do on the silver screen (I must go to the gun shop soon and see if I can hold a real one and compare). But this one has good heft, feels like a firearm, is solid and has excellent quality. All metal including trigger, hammer and cocking lever. However, the front and rear sights and the barrel bands are plastic. Doesn’t make sense. Shouldn’t cost that much more to make them metal. The front sight is hooded (plastic also). Not sure if that’s authentic. Looks good, though.

I don’t know what kind of wood is used for the dark reddish-brown stock, but I like it. The finish is slightly rough to the touch, not smooth and shiny. The carving of the upper stock from the receiver to the comb is beveled with angular edges rather than a smooth, rounded contour. I don’t think it’s authentic, but I like it. It is, in my imagination, what I’d expect if I was to go buy one at the Wagon Wheel general store in Durango in 1894. From the comb on back, the upper and lower buttstock is rounded like any other rifle stock. 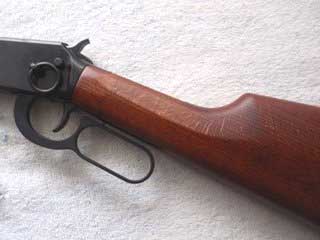 Notice the angular carving of the stock in front of the comb. It adds an antique look to the stock.

OK now, let’s put ‘er to work
I took the gun down to my indoor range and got out the tin of RWS Hobby pellets. I want to use these since they’re tried and true and, well, they’re already opened. When I used them up, I loaded a few Gamo Match.

But wait, I’d better put in the CO2 before I shoot. I pulled out the apparatus that holds the two 12-gram CO2 cartridges. I see two already in there–bonus, I incorrectly think (more on this later). I lock it back in. Removing and reinserting it works smooth and positive. I’m pleased.

I loaded up the two magazines that came with the rifle. Nice! They’re metal, not plastic. Very good quality. The eight pellets fit snugly. I have to press them firmly to get their tails flush with the holes. They definitely won’t fall out if you turn over the mag. There’s a slot in the right side of the receiver with a hinged door that looks and acts just like where you’d put in the cartridges, just like the firearm. Except that no cartridges go in it. Pressing it releases and pops open the magazine loading door. The mag has a hole in the center. Slip that hole over the post in the door, close the door and I’m ready. 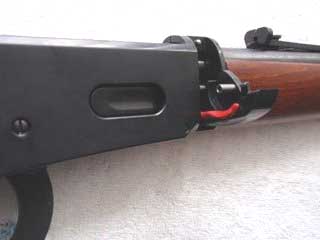 Here’s a look at the breech before inserting the magazine. Note the mounting post above the red strip, which puts pressure on the mag so it doesn’t spin freely. 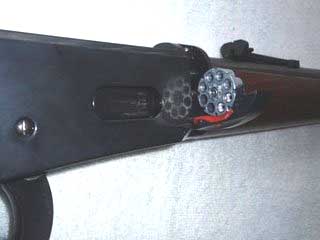 Here it is with the mag inserted.

Time for some shootin’!
I cocked the lever to chamber a round. Now were talkin’! It feels just like the real thing to me. This is what I was looking for when I ordered the gun. I aim down range. It feels comfortable, reach is good for me, hits my shoulder right. The rear sight is a standard blade. The front is a post in a tubular hood. I take careful aim, pull the trigger and…”click.” Whoops! I check everything over, check safety, it’s off. Must be the CO2. I remove the CO2 apparatus. Everything looks good. Put another twist on the cartridge seating bracket thinking maybe they weren’t seated for transit. Try another shot…nothing but “click.” Turns out the cartridges inserted in the gun were empty. Well, that’s ok. I suppose they were used to test fire the gun and left in as shipping protection for the cartridge seats, or to keep air pressure in the gun, maybe. I pulled out the old, drop in a drop of Pellgunoil in each seat (you see B.B., I do pay attention), insert two new cartridges and I’m ready to shoot.

Replacing the cartridges was easy. I didn’t like tightening the CO2 cartridge bracket down because it took a lot of effort, and I couldn’t tell when the carts were pierced. I was very afraid of over-tightening and ruining the gun on my first venture. I reread the directions and it said to tighten until the handle stops, then back off and lock in place. I guess, maybe, it can’t be over tightened unless you go past “stop.”

Now that the bugs are worked out….
Shooting the gun was fun and fast, with a very audible pop and everything I hoped it would be. The report is loud at the muzzle, louder than any of my springers or single-stroke pneumatics. It has a distinct pop to it. If you want to shoot discreetly, this won’t do it. I don’t think this is news to you experienced shooters. I understand this is typical of CO2.

I’m terrible with open sights, so I can’t speak about accuracy. B.B. covered that very well in his review. I believe him. I did hit several 8 and 9 rings and one X. I don’t have a chronograph, so you’ll get no techie stuff from me.

I went through those first two CO2 tubes pretty quick and felt like I got a lot of shots. The mag holds eight pellets and I found it hard to count to eight, and there’s no external way to tell how many shots are left so I had quite a few dry fires. I found I could open the mag carefully, count, then carefully close and keep on counting as long as I didn’t move the mag. I also noticed that, even though I pressed the pellets in tight, firing jars some of them loose and they’ll fall out if you’re not careful while opening.

Let’s do a little pellet counting
On the second set of CO2 cartridges, I tried to count how many shots I got before having to change. I counted out 75 pellets and placed them in the tin lid. I remembered B.B.’s review using 60 as optimum, but I’m here tonight to have fun not win a contest. With my poor use of open sights, I stayed inside two inches at 10 meters for the whole 75, plus about 5 extra dry fires because of my can’t-count affliction. I loaded up two more magazines and still stayed within two inches on the first then started dropping off on the second. I loaded up two more and started shooting six inches low and progressed inch by inch off the paper. It dropped that fast.

One more little bug
While shooting, I also adjusted the sights. I had to adjust the rear sight up two clicks. That was easy to do. I was shooting left alot so I adjusted the front sight left until its base was flush with the mount. That’s a lot of left. I had to figure out how to adjust the windage on my own because the instructions didn’t tell me how. It just said that if you’re shooting left…adjust left. Yeah, but how do I move the thing? Turns out it’s a friction fit. Just slide it the direction you want it to go. No screws to turn, no ratchets to ratchet, just slide it. Is that cheesy? No way to lock it in. You have to remove the hood first but that just clips on in some grooves. Carefully pry it off with a flat blade. I would imagine the front sight becoming loosey goosey in its mount if it was adjusted very often. This is the only part of the rifle that I really didn’t like. I could scope it but I don’t want to. Rooster Cogburn didn’t scope his, did he?

One final point
There’s a special safety under the stock that the cocking lever must return to and hold in or else the gun won’t fire. This is no problem and requires no extra effort on the shooter. After cocking and returning the lever to the shooting position, it snaps up and presses in the safety. B.B. said in his review that the rifle he tested didn’t have this feature but mine does. They must have added it later or given him a prototype.

My final impression? It’s almost exactly what I was looking for (getting rid of the plastic would get rid of the word “almost”). It’s fun to shoot, it’s well made and it’s a good purchase for me. I’ll get many enjoyable shots out of this rifle and hopefully accolades for its showcase qualities.