Guest blogger
This is the second installment of Vince’s guest blog about the fabulous German Rekord trigger and the Chinese copy of it. If you’d like to write a guest post for this blog, please email me.

Machining
As expected, the stamping and machining is cleaner on the German original; but where there’s a sliding interface between two surfaces, the parts on the Chinese gun are smooth. Since my B20 is a fairly high-mileage gun, I think it’s safe to say that these areas were worn smooth rather than delivered that way from the factory. The German-made trigger also exhibits this same effect, although the smoother factory surfaces make it less obvious.

Since the design of the trigger and the four levers works to reduce the sliding friction that the trigger blade feels, it turns out that those surfaces are lightly loaded. And where there’s little load, there will be relatively little friction. So, while the feel of a new BAM trigger tends to improve as the parts wear in, the improvement might not be as pronounced as it would on a cruder design. The two-lever affair (found on the old BSA Meteor and the Shanghai B3/B4 rifles) or the three-lever arangement (used in the Gamos, the Crosman Quest variants and the Remington Genesis) probably have more to gain through the break-in period than the B20/B26 trigger.

While the machining of individual parts in the BAM trigger group is not as good as it is on the much-more-expensive Rekord, any disadvantage here will likely be minimal and eventually go away. Of course, the tinkerer can always help matters along by disassembling the trigger and working those areas himself. Again, there might not be as much to gain as on some other guns.

Geometry
The third thing that needs to be compared between these two mechanisms is the exact geometry between the parts. Are the pivots located in the same relative positions, and are the lever moment arms the same length? This can be critical, as subtle changes in geometry can translate into significant changes in behavior.

To evaluate the geometry of levers 1 through 3, I measured the relative position of the pivots for those levers. Since the levers are almost identical to their Rekord counterparts, this should help complete the picture.

Without going into all the details, I can say that the pivots for levers 1 and 2 are in the same relative locations to each other. But there’s a difference in the pivots for 3 and 4. On the BAM unit, both pivots are closer to the front of the trigger by about .020″, which is a bit more than one would expect just from production tolerances. But the distance between the pivots, which is the more important dimension, remains about the same.

While I was playing around with the partially disassembled trigger units, I noticed that the seocond stage on the BAM assembly seemed to lift levers 3a/3b a lot quicker than on the Rekord. To confirm my suspicions, I measured total trigger travel (measured at the tip of the trigger lever) and compared it to the total lift imparted to lever 3a (measured at the forward engagement adjusting screw):

The lift/stroke ratio on the BAM trigger turns out to be .66, on the Rekord the same value works out to .53. So the BAM trigger is lifting the lever about 25% faster than the Rekord, which means it has less mechanical advantage and therefore is going to take more effort. That 25% is an average of both the first and second stages. Since the first stage seemed about the same, the percent increase in just the second stage is going to be even greater than that.

This led me to believe that the trigger profiles (where the triggers meet lever 3a) must be different. Unfortunately, this was one thing I couldn’t observe with the triggers still installed. Despite my earlier resolution not to undo any factory peening, I drifted out the trigger pins and pulled out the blades. 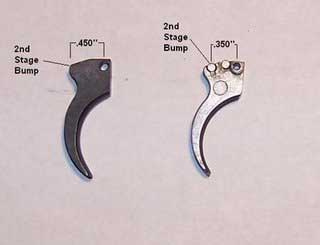 When compared side by side, it becomes obvious why they lifted at different rates (Chinese on the left, German on the right).

The nubs on the Rekord trigger for the first and second stages consist of steel pins set into the aluminum trigger blade, but on the BAM gun the nubs are part of the steel trigger. The first-stage nub is located in approximately the same position on both trigger blades, but notice how the second-stage bump on the BAM trigger is further away from the trigger pivot pin. It lifts faster but loses mechanical advantage, and that’s where the trade-off of greater trigger weight comes in. This situation is exacerbated because that second-stage bump then contacts lever 3a closer to its pivot pin, which further increases the lift rate and thus the pull weight.

This trigger profile seems to be THE culprit in making the BAM trigger operation inferior to the Rekord. Why the trigger was designed like this is anyone’s guess, and I’m not even gonna go there because, frankly, my dear, I don’t give a damn. I just want my trigger improved.

At this point, the rest is easy. How easy? About 5 minutes with a Dremel tool, and that’s because I didn’t feel like going out to my workshop to use the bench grinder (which would have done it in about a minute). I cut back the rear of the trigger to give me a new second-stage bump in pretty much the same place as the Rekord trigger. 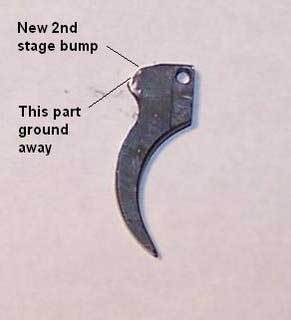 About 5 minutes with a Dremel too, and my Chinese Rekord trigger looks like the German version.

Back together with the BAM trigger group to evaluate the results. I didn’t bother measuring the new lift-to-stroke’ratio because, well, I simply forgot! Besides, the proof’s in the pudding, as they say, and I wanted to try out that trigger. I was anxious to find out if the feel improved as much as I hoped it would and if the trigger would still fire the gun. Now that I got the mechanical advantage I wanted, the trigger has to move more. It was possible that the trigger would run out of travel before tripping the sear. But I didn’t think this should be a problem, and as it turns out…

The trigger works great, and the difference in feel between the BAM trigger and the real Rekord has largely evaporated. The B20’s trigger has an ever-so-slightly softer transition into the second stage, probably because I should have dished the top of the trigger between the first- and second-stage nubs. And it’s still just a smidgen heavier in the second stage than the Rekord when set to the same first-stage tension (about 4 oz. or so). Realistically one can hardly feel the difference, but it did have me wondering until I remembered the stiffer trigger spring in the BAM unit. That’s probably the reason for it. No matter, as I said the difference is minimal. Realistically speaking, the B20’s trigger is pretty much as good as I’d want it.

As a side note, I’m going to mention a trigger issue I’ve seen on the BAM B26 model, which is supposed to be the improved and better-built version of the B20. And from BB’s latest test of that gun, I suspect that his gun suffered from the same problem. In both these guns, there was no discernable second stage in the trigger. Since the stock BAM geometry produces a rather drastic increase in pull-weight when the second stage is reached, this seems rather odd. As it turns out there WAS no second stage in the gun I was shooting, and for a very simple and fixable reason.

If you look at the diagram of the trigger mechanism (refer back to part 1), you’ll notice that there’s a metal tab sticking down that functions as a forward stop for the trigger (lever 4). Now, imagine what happens to the trigger blade if that tab is located further to the rear. The trigger starts moving through the first stage; if the tab is back far enough, the trigger is completely through the first stage and starting on the second. Well, that’s exactly what happened on my B26. Maufacturing tolerances, I guess, had that tab too far to the rear. A little grinding or bending (I don’t remember which I did) allowed the trigger blade to come forward more. Voila! My first stage was back.

There you have it. Did BAM really copy the Rekord trigger? The answer has to be a qualified yes. They did a fair job of it; and with a little massaging, you should be able to just about replicate a real Rekord’s excellent characteristics. Why on earth did BAM make it a little different? Who knows! Seems strange that they would come so close and then stop just short of delivering a very good airgun trigger. Fortunately, it isn’t that hard for the owner to take it the rest of the way. 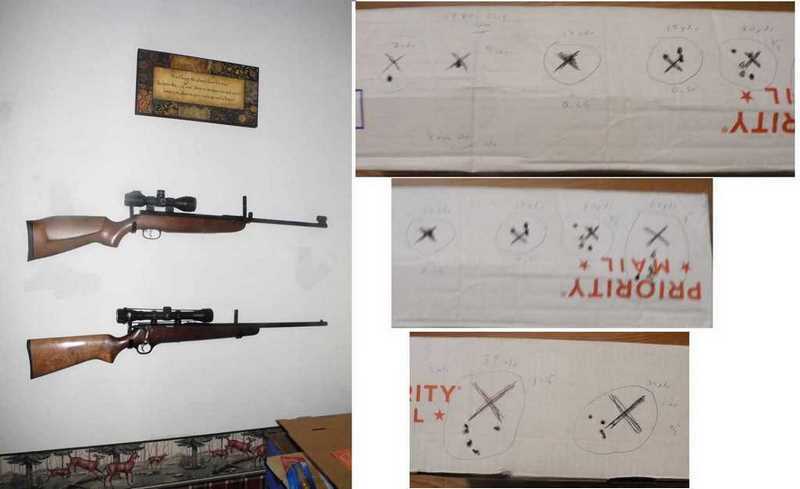