There were almost 100 comments to the first part of this report within the first week. Not bad for a report done on a Tuesday. When there are that many comments, I know I’ve struck a chord.

Today, in the velocity report, I’ll show you a few more things about this amazing BB gun. I’ve owned the model in this report for about seven years, but I had never chronographed it before. So, there was a big surprise waiting for me that I’ll share with you in a moment.

First, let’s talk about how this gun cocks. Because the cocking puts wear on the finish of the barrel, many guns you might be tempted to call excellent are really not higher than very good. To cock the gun, you pull or push the barrel straight back into the receiver. I mentioned in Part 1 that the cocking exposes the shooter to the muzzle, so care must be taken to ensure safety. And this is a very powerful BB gun, so it isn’t easy even for an adult to cock. It’s definitely not for kids.

I mention the cocking because of some talk we had regarding the condition of these guns. The M1 Carbine is a gun that degrades fast because of how it’s cocked. Not only does it get the scratches, but the acid from your hands removes the bluing from the forward part of the barrel when grabbing it for cocking.

The barrel is forward.

The barrel is cocked. You pull it forward before taking the shot. 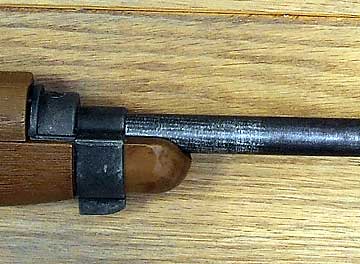 The most common wear on an M1 Carbine happens where the barrel scrapes against the stock during cocking. Most guns have these lines and they reduce the condition from excellent to very good. A Carbine that doesn’t have them is rare.

Years ago, when I first saw this gun, I assumed it had to be a CO2 gun because it wasn’t obvious how it worked. So, I passed up the first one at $15. It was another decade before I discovered the error of my assumption.

Loading and oiling
The M1 Carbine is a 22-shot repeater. The box that looks like a magazine is just a BB reservoir–the actual BBs you are about to shoot go in a hole on top of the upper handguard. A short pull of the operating handle opens the BB loading hole and the oil hole located to the rear of it. The BBs are fed by gravity one at a time into the shot seat for firing when the barrel is pulled back. You naturally elevate the barrel to cock the gun, so the BBs always feed smoothly.

Looking down at the top of the gun, the larger hole at the right is were the BBs are loaded. The smaller hole in the center is for oil. However, the cocking handle is forward and both holes are closed. 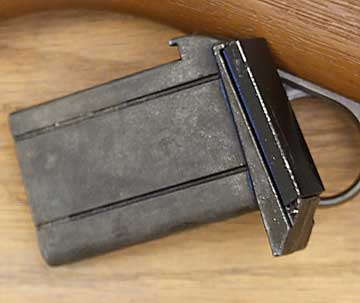 The fake magazine is actually a BB reservoir. Once out of the gun, the plastic cover slides back and BBs can be dumped out.

The firing mechanism in this gun is quite different from a traditional BB gun mechanism. It uses a poppet valve that accumulates air pressure and then suddenly pops open to force air behind the BB. It works effectively enough that the Crosman V350 got its name from the expected velocity. And, until I fired this M1, that was the highest velocity I’d seen from these guns. But this one is hotter!

I oiled the mechanism with several drops of Crosman Pellgunoil, then shot the gun to work in the oil. Once the velocity settled down, I recorded the velocities of three different brands of BBs.

Crosman Copperheads
Crosman Copperheads were slower and had a greater spread. Since they weigh the same, that means they don’t fit the bore of this gun as well as the Daisys. They averaged 374 f.p.s., with a spread from 355 f.p.s. to 378 f.p.s. But they’re still faster than any steel BB gun tested to date.

The barrel of this gun moves several degrees when it’s twisted. Since the front sight is attached to the barrel, that’s a potential cause for inaccuracy. I’ll adopt a procedure of rotating the barrel in the same direction until it stops before every shot to cancel this effect.

This is getting interesting. I can’t wait to see how this baby shoots!