Before we begin, I will be out of town today and tomorrow, so I’m asking you veterans to watch the comments for me. I’ll start answering when I return this weekend.

Guest blogger
Vince rebuilt a Markham gun for Wayne, another blog reader, and here’s the third part of that project. If you’d like to write a guest post for this blog, please email me.

The Markham Wayne sent me (Dee-Dee) had one major cosmetic and functional flaw that would be a bit difficult to take care of–a busted rear sight. What’s so hard about that? As I alluded to earlier, the Markham–despite it’s genesis in the long ago (or perhaps because of it)–wasn’t exactly a model of exotic construction or advanced engineering. It was made to be cheap, and part of the cheapness extended to the rear sight. By this time, it was out of sight–literally broken off, and I could only guess what it looked like. The only clue was a small square hole in the top of the receiver, where it looks like a tab was punched out. More than likely that tab had been bent upward and formed into a crude, non-adjustable sight. 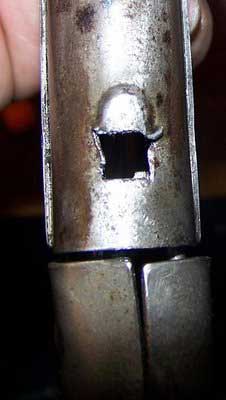 I needed to do SOMETHING to aim with, at least temporarily, so I could evaluate how the gun was shooting as I worked on the innards and on the barrel. I cut a 1/4″ strip of .020 sheet steel, formed it into an “L” and stuck it in through the hole. When the rear spring retainer was slid into place, it held nice and tight. 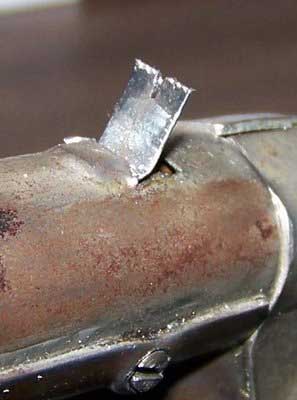 I used a temporary rear sight while working on the powerplant.

I used a cutoff disk on a Dremel to make the notch, and–as I suspected–the fact that it was so close to the shooter’s eye made the tiny notch look huge.

After I got the gun working well enough and adapted the Daisy 499 shot tube, I knew I needed to put something better on there. Since Wayne is old enough to be, uh, my older brother, I figured that his eyes weren’t much better than mine for seeing things close up. That meant that I ought to put the sight a couple inches further forward than the original. And since the gun now has more accuracy than an ordinary BB gun, I wanted to make something adjustable. Lastly, of course, it could not involve any kind of significant modification to the gun itself.

I sort of formed in my mind a picture of what I wanted to make and just started working off my mental drawing. I was going to need some thin steel stock, preferably some sort of spring steel. It didn’t have to be a high grade by any stretch, but something that could flex a bit without taking a set.

I found my answer in a cheap dollar-store Chinese-made putty knife. I forgot to snap a picture of what it looked like before it sacrificed itself, but this is the piece of metal I cut out of the blade. 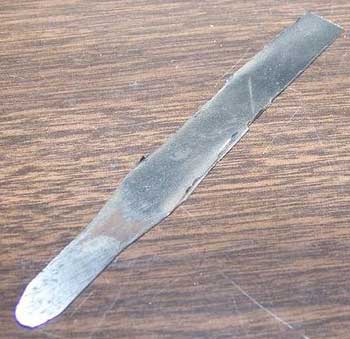 I heated one end of the metal strip so I could bend it up to form the sight leaf, and I drilled a small hole about 1/2″ back from it for the elevation adjuster. 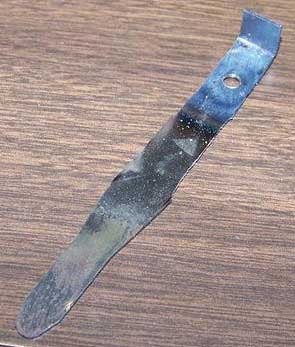 Raw material has been shaped and drilled.

I was concerned about the bend. Apparently, the metal wasn’t quite hot enough when I bent it, and it started to crack. Because of this, I flowed some brazing material into the corner to strengthen it.

In order to make a threaded hole for the adjusting screw, I placed a 10-32 nut over the hole I just drilled, held it in place with a machine screw and soldered it to the blade. I had to grind the plating off the sides of the nut before the solder would stick to it. 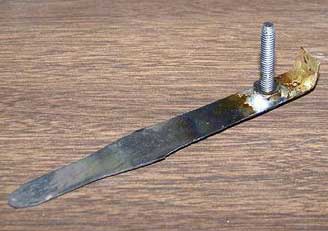 Bend was brazed for strength, and nut was soldered in place. Screw is just to hold nut during soldering.

Since the other end of the sight is going to anchor through the existing sight hole, it has to get narrowed to a bit under a 1/4″, and I started to smooth out the rest of the rough-cut edges. The narrow tongue on the end was bent over after applying PLENTY of heat and eventually got hammered flat. 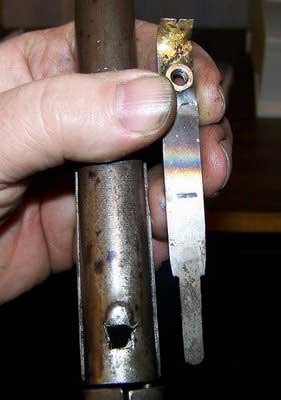 Sight base is sized to pass through square hole.

Bend was made with plenty of heat to avoid more cracking.

Since the adjuster screw is going to bear against the top of the tube it has to be made out of nylon so it doesn’t damage the metal or the finish. I cut a section from a 10-32 nylon machine screw and cut a slot at one end. 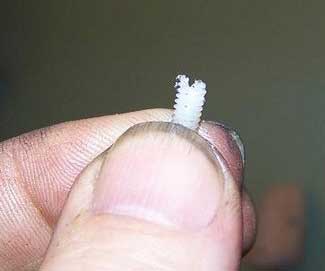 Nylon screw is made into adjustment screw.

There isn’t a lot of room to play with–the front sight is very low. With the higher velocity from the Daisy shot tube, it’s going to be easy to have the gun shoot too high. I have to make the rear sight pretty low, and that’s why there’s no head on the adjuster screw. It would have blocked the low notch. I put the tongue into the rear sight cutout and tapped it forward, which pretty much completes the basic installation. I cleaned it up, painted it and remounted it on the gun. 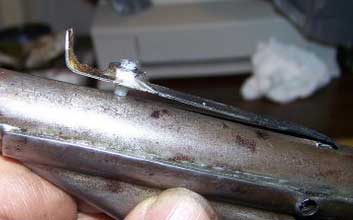 Rear sight base slipped into square hole and tapped forward to tighten. 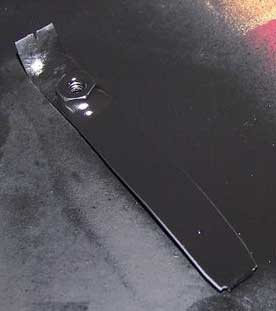 Sight is removed and painted black. 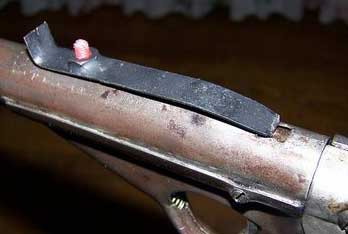 New rear sight is mounted on the gun.

Note that I had put a bit of a curve into the metal–this was to make sure that the sight blade went all the way down when the adjuster was screwed out all the way.

I took it out for some 5-yard shootin’ and found that the rear leaf is still too high. It needs about another 1/8″ taken off the height, which requires the adjuster to be shortened as well. That means the sight has only about .25″ of vertical travel, which translates into a POI shift of about 3″ at 15 feet. According to my rough calculations, this should give Wayne enough elevation adjustment to keep him on target out to about 15 yards or so, which is well past normal BB-gunning distance.

Windage adjustment is a lot simpler. The sight can be bent slightly to the left or right. While crude, this shouldn’t be an issue simply because windage isn’t something that should need constant readjustment. There isn’t as great a variety of BBs available as pellets, and I don’t think there’s going to be much difference in POI between Crosman, Daisy or Avanti BBs–especially in the horizontal plane. Once the sight is positioned properly, the only thing that needs changing is the elevation.

And how does it work? Well, the sight is still blurry to my eyes–but it’s a blurry notch, not a blurry blur. It’s a lot easier to see, but the same doesn’t hold true for the very thin front blade. Frankly, the gun shoots about the same for me as it did before (which is still pretty good). From the standpoint of workmanship, I really wish it had come out better than it did, but Wayne will have to be the final judge of that.

This ends my association with Dee-Dee. By the time you read this, she’s gone back to her owner, where she’ll probably get used from time to time. Working on something that was old enough to have been bought by my great-grandfather for my grandfather got me thinking about a couple of things.

For one, the point comes to mind is that things–even simple things–that are the creative products of the human mind will in some small way bear the faint imprint of those who designed and built them. I guess that’s what makes archeology so interesting. If the things happen to be machines that were intended to do something, then just sitting on display probably wasn’t what they were intended to do. I’m an engineer by trade, and I’ve been a mechanic. If something I’ve designed and/or built is still being used–even sporadically–way longer than I ever intended, well that just sort of tickles me. While a number of collectors might shudder at the thought of a relic like Dee-Dee actually being used, I can’t help but think that doing so serves as a better tribute to those responsible for its existence. Even if it gets shot only once in a while, well, there just seems something inherently right about that.

And that leads to the second point. The world we live in, with all its travails, is indeed a playground of sorts–with tons of stuff to discover and zillions of things to make. Fun and games are certainly part of the intended order of existence, and something like this lets us play, in a sense, with those who went before. Just as one boy might offer to let another try out his slingshot, I can almost imagine the first kid to own this thing reaching across the chasm of 100 years, holding the Markham out to us and saying “Here! You wanna try it?” And in another sense, a toy BB gun is more right than any number of more important and more serious contrivances, for it involves not only thought and effort and technology, but it also involves simple, unadulterated fun. Children understand the importance of this, but the wizened old adults sometimes forget.

I hope Wayne has fun with Dee-Dee. That’s what she was meant for, and having good fun is truly a wonderful thing.

30 thoughts on “Methuselah – Part 3: The end is in sight! Rebuilding a Markham BB gun”