This report is a special one. I completed the accuracy test of the Big Cat a month ago, but at the time I said I didn’t like the Gamo scope and mounts that come with the rifle. I promised to return to the rifle one more time and test it with a more powerful upscale scope mounted in a good set of 4-screw scope rings. This is that test.

What I wanted to test was whether or not the accuracy of the rifle improved when the rifle was shot with better optics. The scope that comes with the gun was blurry at the 21 yards I shot, which is pretty bad for a 4x scope. They magnify so little that they should be clear at 21 yards. The scope rings were also suspect because they pulled the scope out of alignment when the two cap screws were tightened.

For this test, I used Leapers 3-12×44 Mini SWAT scope. This short scope has a 30mm tube and is brighter than most scopes in this power range. It has a mil-dot reticle and sidewheel parallax adjustment down to 10 yards. I’ve used this scope in numerous air rifle tests over the past several years, and I know it’s a good one. Compared to the 4x Gamo, it was like looking through a clear window.

I mounted the scope in two-piece mounts of an undetermined nature, but UTG 30mm medium-height rings would have worked better. The rings I used didn’t have a scope stop pin, so I had to use a separate Gamo scope stop behind them to tie into the scope stop hole on top of the Big Cat spring tube. 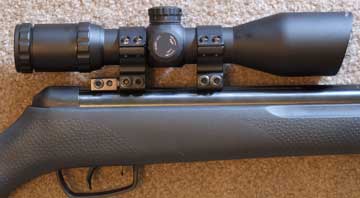 Leapers mini SWAT scope is small but loaded with features and as bright as you could hope for. The optics are clear and sharp. This scope is three times more powerful than the Gamo scope used in the first accuracy test.

The pellet of choice was the Crosman Premier 7.9-grain pelletr, chosen in the first accuracy test on the basis of accuracy and consistency. I started out using pellets straight from the box, but when the results didn’t seem to favor the larger scope, I cleaned the barrel and oiled the pellets. While that sounds like special attention was paid to the gun during this test, I did it to avoid all the “what-ifs” that typically come afterward.

Crosman Premiers straight from the box
Shooting at the same 21 yards and using the same version of the artillery hold as in the last test, I quickly established that the Big Cat wasn’t going to shoot any more accurately, despite using the higher-power scope. 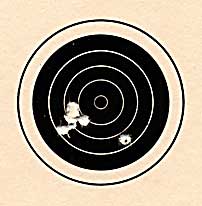 What a teaser this target was. Unfortunately shot number 2 went to the right of the group. You could call it a flyer, though nothing different was noted while shooting. This was a typical group size the first time I shot the rifle with the larger scope, but this particular group was so tantalizing with those four shots in that tight bunch.

After shooting several frustrating groups like the one above, I decided to pull out all the stops and go for broke. I cleaned the barrel with JB Bore Paste and switched to oiled Premier pellets for the next series. The impact point moved up by an inch, but as you will see, very little changed. 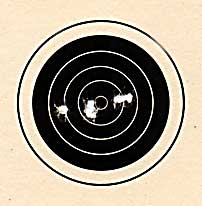 Two rounds on the right and three on the left. More teasing! The group size is typical of the rifle after bore cleaning. I re-sighted the scope after cleaning the bore. 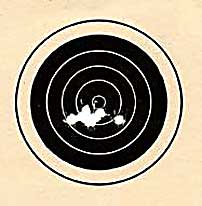 A tighter group that promises one-hole accuracy. This was the best I could get the rifle to shoot. 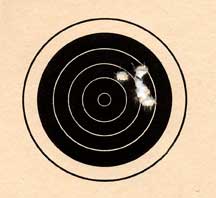 This is a typical group from the last accuracy test. As you can see, it’s not much different.

In this test, the point of impact did not shift as it had in the last accuracy test. You’ll remember the POI was walking to the right as I continued to shoot. Though the Big Cat is very sensitive to hold, the hold is a natural one and neither difficult nor painful. I used a straight artillery hold and laid the forearm in the flat of my left hand. It seemed best to push the off-hand forward of the balance point about an inch. Then, the rifle settled down and shot its best.

What was learned?
First, despite using a much more expensive scope sight that was three times as powerful, the groups were no smaller. Even though I felt better about the sight picture, the expensive scope wasn’t needed for accuracy.

Next, I learned that the Big Cat barrel was not dirty for all the tests that went before. Nothing changed after this cleaning, so the bore must have been in fine shape all along.

I re-established the fact that 7.9-grain Crosman premiers are the best pellets for this rifle. I did try others in this test, but nothing measured up to Premiers. 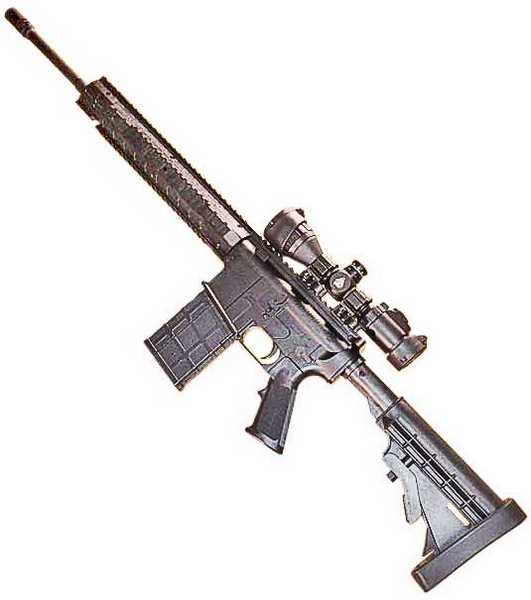