Well, this report really resonated with a lot of readers. Here are three observations I have from the comments posted to Part 1 and from other comments I’ve read since Part 1 came out. First, there are a lot of you who admire old vintage airguns like this one. Thanks to an anonymous reader who told me to look for the date stamp on the underside of the barrel close to the baseblock, I now know that my rifle was made in April 1928. That makes it the oldest airgun in my possession at this time. David Enoch told me that he really loves a Hy Score 801 that the same person who fixed up my rifle worked on. We agreed that Jim does the best work we have seen on wood and is also the finest shipping packer around.

The second observation I want to make is that a LOT of people have done business with Jim and all of them have found him to be just as meticulous as I have. So, my comment about safely buying used airguns over the internet extends to people like him, who have a well-documented reputation.

The third observation I want to make is that this blog can make things happen! There was a Hy Score 80-7 (Diana 27) for sale on the Yellow Forum classified ads when the first part of my report came out. Within two days of mentioning it in the remarks section of this blog, the seller had an offer pending. Since it hasn’t been relisted, I assume it sold.

Normally, today would be velocity day, and I will get to that in the next report, but I first want to describe the rifle to you in greater detail.

Date stamp
As I mentioned, the date of manufacture is stamped under the barrel, around the point where the barrel enters the baseblock. It’s very typical of German airguns to have a date stamp somewhere on the metal parts. I was surprised to see how old this airguns is.

Date stamps are common on pre-war German airguns. This shows the month and year, which is the most common method.

Front sight
The rear sight on this rifle is fairly plain for the era it was made. A simple screw with a large head adjusts elevation. But the front sight shows the company cared about accuracy. It’s a simple post in a round hood, but they thought to engrave several lines on the front that align with a tiny mark made in the center of the barrel. The front sight can be drifted left and right in a dovetail, so there is a windage adjustment of sorts. Little touches like this are what endear these vintage designs to airgunners. 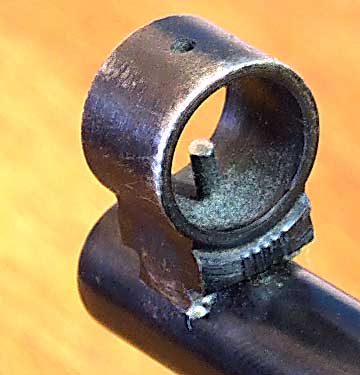 Barrel latch
The barrel latch is what makes it a Haenel. There are barrel latches on contemporary airguns. The HW 35 that is still being made and has one, as does the Slavia 630/631. All pre-war Haenels had them, too. When you cock the gun, your cocking hand first pushes straight back on the latch, causing the barrel to drop open at the breech. 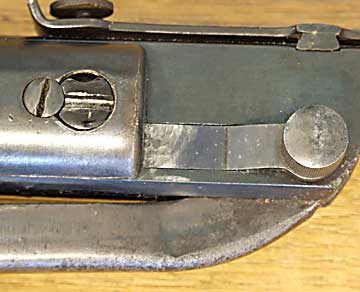 Barrel latch is located on the right side of the baseblock. Note that the pivot bolt is locked in position by a screw that fits a recess in the circumference of the pivot bolt head. This kind of construction has gone the way of the dodo, but it’s the stuff of airgun collector’s dreams! 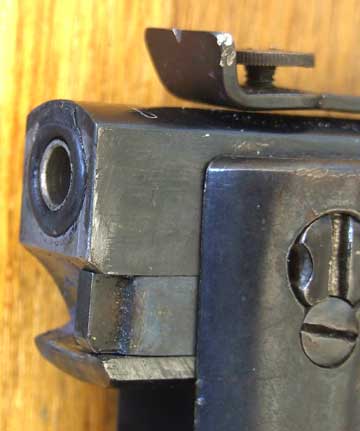 Breech is fully open on a cocked rifle. That squared-off bar on the side of the deep notch under the breech is the end of the barrel latch. The breech is held closed by a chisel detent that’s located in the spring tube. The barrel latch pushes the detent back out of this deep groove, allowing the breech to drop open. Note the low height of the o-ring breech seal in this photo. I may experiment with a spacer after testing velocity. The lessons we’ve learned recently have sensitized me to the breech seal.
Share
1053 / 4632