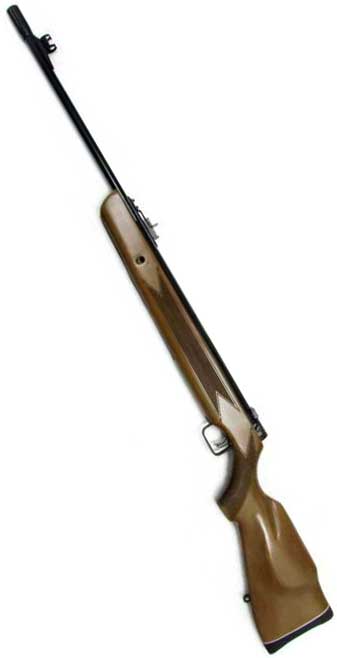 The Air Venturi’s Avenger 1100 is a big spring rifle for not a lot of money.

Before we begin this report I have an announcement. The television program is heating up and I am taking a larger on-camera role (I’m now the program’s co-host with Paul Capello), so my ability to answer questions will be extremely limited for the next few weeks. The blogs will continue, but I’m going to be writing them on the road on a laptop, and my resources are very limited. The ironic thing is I will be filming airguns during the day and writing this blog in my room at night, and yet I won’t have the access I need to write the normal reports.

Please bear with me. The schedule should return to more like normal after July 4th. Those of you who have been helping me answer questions can help the new readers by herding them to the current blog to ask their questions, so all our readers have the chance to answer them.

The television program, called The American Airgunner, is now filming for the 2009 season that starts on Saturday, July 4, on The Sportsman Channel. We are scheduled for the 8:30 a.m. slot. The show will be replayed twice more that week, and I will get those times for you. You can visit our website for more information on the program. We will have some footage on the website in time and you can watch the program trailer we used to sell the show right now.

Now, for today’s report. I’m starting to look at an Air Venturi Avenger 1100 today. This rifle is a conventional breakbarrel, spring-piston airgun made by Mendoza of Mexico. It’s available in both .22 and .177 calibers. The one I’m testing is .177–at my request. Velocity is rated at up to 1,030 f.p.s. I’ll be testing that for you in the second report. Today, I’d like to look at some of the features this gun has to offer.

I’ve tested this rifle for you before. In fact, I did two parts of a test, but failed to finish the test. I said I would in Part 2, but I never did. So I will reset to zero and test this rifle like I never saw it before, which I haven’t.

This is a large rifle, weighing 7.3 lbs., depending on the weight of the wood stock, and with an overall length of more than 45 inches. The cocking effort is 35 lbs. for most of the stroke, with a bump up to 40 right at the end, so don’t buy the 1100 as a plinker. The model number refers to the velocity in .177, of course.

The beech stock on the test rifle is stained an even medium brown color over wood that shows some visible grain. The contours of the butt around the comb and cheekpiece (left side, only) appear melted, as if left too long in the hot sun. Both the pistol grip and forearm have two panels of checkering apiece. Every dimension of the stock is cut large, long or full, making this an adult air rifle for certain.

The metal is finished deep black and well-polished. Most of the words and numbers are etched into the metal with a vibrating stylus, but the model US Avenger 1100 is laser-etched in silver on top of the spring tube near the breech.

The scope rails are standard 11mm with no built-in scope stop, but you can butt the rear ring against the large plastic end cap to prevent it from moving. Speaking of plastic, that and the front sight base are the only parts I can find that are made from it. The buttpad is thick, solid black rubber and everything else is metal.

As you can see, the shoulder against which the rear scope mount presses is very large. It serves as the scope stop.

The trigger is special
The trigger is Mendoza’s unique two-bladed affair in which stage one of the triggers is a separate blade set slightly ahead of stage two. When the first blade is pulled back to the other blade, you know stage two has been reached. It may look strange, but it’s so intuitive that I’d like to see it on other air rifles. In fact, it is the airgun equivalent of Savage’s AccuTrigger. 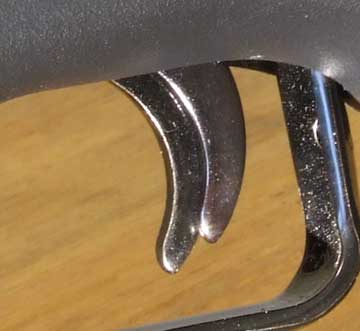 Two trigger blades give great feedback for the trigger-pull.

No baseblock
Mendoza has done away with the traditional baseblock for the breech. Instead, the barrel is welded to a sub-carrier that contains the pivot bolt. It works fine, and you don’t even think about it. 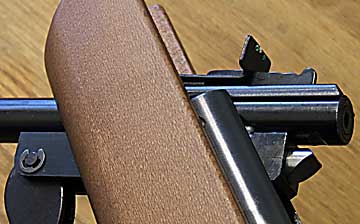 The barrel doesn’t pass through a baseblock in this rifle. It’s welded to a small stub that pivots when the rifle is cocked.

Both the front and rear sights are fiberoptics. I don’t normally care for them, but they’re very popular, so I must be in the minority. 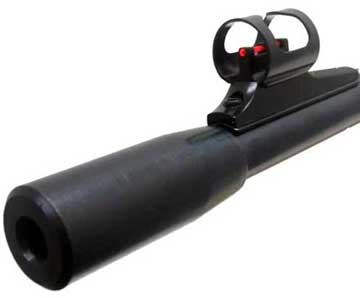 Front sight is a square post with a fiberoptic bead. Muzzlebrake is the handhold for cocking.

Paul Capello recently did a video review of the Avenger 1100 for his Airgun Reporter. He found that his rifle was detonating a lot, just like the rifle I tested last year. If that turns out to be the case with this rifle, I may just go inside and clean it out. That way, we’ll all know the full potential of the Avenger 1100.