Guest blogger
Vince got another gun from Wacky Wayne, but this vintage rifle is one that most airgunners probably won’t see unless they go to an airgun show. In fact, most of you have probably never heard of this air rifle. Here’s a chance to see it before and after Vince does his magic.

Do Tell! That’s pretty much what Wayne grunted to me as he informed me of his latest win on gunbroker–a German-made Tell air rifle in .22 caliber. “Ugh. I buy Tell. You do Tell,” or something to that effect. He wanted to send it to me to give it a once-over, a check-out and do anything else necessary to make it into a world-class FT rifle. Or whack soda cans at 10 paces. Whatever.

The Tell is a bit unusual.

There’s no forestock at all, the cocking link is totally exposed and the sights are not adjustable for elevation. Since they’re both dovetail-mounted, they can be drifted for windage. There’s a crude trigger adjustment that looks factory–an external screw that threads through the front of the triggerguard and controls the engagement of the direct-sear trigger. 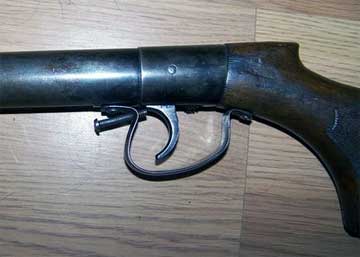 Simple, but I don’t like this sort of adjustment on a direct sear.

The barrel and breechblock are machined out of a single piece of steel, and the rear 40 percent or so has a classic octagonal shape to it. All in all, something about it very much reminds me of how an early .22 rimfire rifle might have been built. I have no idea of the date, but another early German airgun I worked on for Wayne (a Haenel Mod 1 DRP, ~1920s) looked pretty normal. So, I’m guessing this one might be earlier than that. The makers of this rifle certainly had a preference for machining over stamping, and it makes me wonder what it must have cost new.

As I start looking it over, I notice a couple of problems right off the bat: the lockup feels loose and the barrel has a definite upward lift to it. Velocity is in the low 400 with Gamo Match pellets, which I imagine is probably pretty normal for it. With the questionable lockup, I didn’t even try accuracy at this point; rather, I just dug right into the guts of it.

The rifle comes apart in an interesting way. A little unusual but not unheard of. Wayne’s old Haenel and my R10 are constructed like this. There are no pins to knock out; once the proper screw is removed, the endcap with the trigger assembly simply unscrews from the rest of the action. 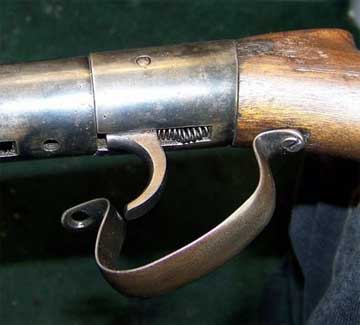 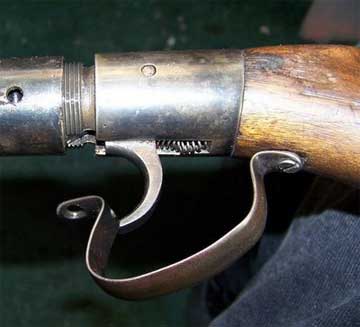 At this point, it disassembles pretty much like any standard spring gun. The inner parts are in pretty good shape (hope MY inner parts are in as good a shape at that age!). The leather seal on the piston hasn’t visibly deteriorated, and the catch for the direct-sear trigger looks pretty good. 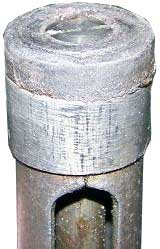 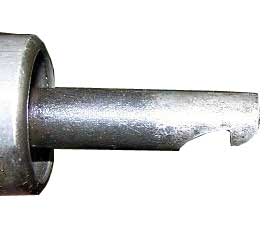 No serious wear on the direct-sear trigger.

This is something I was particularly concerned about since the trigger felt “iffy” when I test-fired the gun. By iffy, I mean that it wouldn’t always hold. I don’t trust iffy when it comes to direct-sear triggers (well, any trigger for that matter).

Vince will tell you more about Wayne’s Tell in the next part.