Hammerli Razor is an affordable breakbarrel with high-quality fit and finish.

Before I begin, I’m going to Pyramyd Air today and won’t be back until Friday. I’d like to ask the old-timers to watch the blog and help the new folks. Thanks.

I’m testing the Hammerli Razor on a request from at least one reader. I must have balked at the idea because I already reviewed the TF Contender 89 in .177, a derivative of the Chinese AR1000. However, this Hammerli is made in Spain. So, this is a brand new rifle to me. I see the family resemblance to the AR1000, but coming out of Spain, this must be from the line of the sire. How strange to have more familiarity with the copy than the original. This is the original, which Vince once said was probably related to the Norica GS1000.

Overall
The Razor is a large breakbarrel. It weighs 7.5 lbs. and is 45.5 inches long. That’s lighter (though slightly longer) than a Beeman R1, but still larger and heavier than an R9. It has a ball-bearing detent holding the barrel closed, so you don’t have to karate-chop the muzzle to start breaking the barrel for cocking and loading.

The finish is impeccable! The bluing is deep and even, and the woodwork is as good as the best that Europe offers on a production gun, with the possible exception of the Air Arms TX200. The metal is not polished to a high shine like a TX, but rather to a more satin finish like the RWS Diana guns.

New cleaning product
Birchwood Casey’s Barricade is a rust preventative that smells a lot like their Sheath that I’ve used for years. It says no harm to synthetics, so I’m testing it on airguns. It cleans oil and grease very well and leaves a protective film that stands up to prolonged salt spray. Pyramyd Air doesn’t carry it, yet. If I find that it works well on airguns, I’ll recommend that they stock it. It cleaned the Razor quickly and left a nice shine.

Barricade from Birchwood Casey is for cleaning and protecting the metal surfaces. In its first use, it worked well.

Have you noticed that I haven’t yet fired a shot? I’m gushing all over the gun, and the test hasn’t begun. What does that tell you about the fit and finish of the rifle?

Plastic parts
The trigger, triggerguard, end cap and the two screw covers of the forearm screws that look like spanner heads are plastic. Other than that, the rest of the gun is metal and wood.

Fiberoptic sights
Both front and rear sights are fiberoptic, but the light is very subdued, so they don’t get in the way of precise aiming. The front red dot is all but invisible and acts just like a metal bead. It lights up only in strong daylight.

The rear sight is all-metal and has scales for both windage and elevation adjustments. This is the kind of quality rear sight some shooters will love, because it really works. Of course, there’s an 11mm dovetail and a proper scope stop at the back of the rail, so scope users are properly set up. I plan on doing something a bit different with this rifle–at least at first. I plan to test a new BKL mount to see whether it can hold its position with clamping force, alone. Back when I wrote The Airgun Letter, the BKL mounts I tested all failed the holding test, but the six-screw model 260 was not yet available and none of the mounts were being made on modern CNC machinery. You may be interested in following this test. 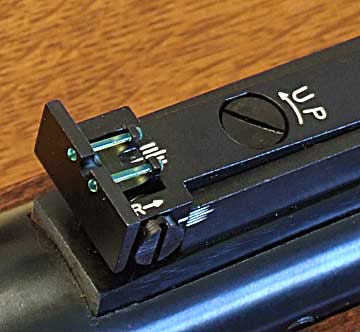 Now, that’s a rear sight! All-metal and crisp indexes and directions for adjustment.

I got the rifle in .22 caliber, because at this power level it is better-suited than .177. The max velocity advertised is 820 f.p.s., and of course that’s the highest velocity with the lightest pellets, so I’m hoping to get Crosman Premiers running in the 720-750 f.p.s. region. That would make the power equivalent to the stock Beeman R1.

The cocking effort measures 33 lbs., so this rifle is for adults. I fired one shot and had a detonation, but the action feels smooth and solid. I’ll know more after velocity testing.

The bottom line is that this is a rifle worth considering. We’ll have some fun with it.