In early 2007, I made a presentation to the Crosman Corporation that resulted in several significant things. The first was the development and production of the rifle that became the Benjamin Discovery. The second was Crosman’s commitment to the foundation of a new corporate section dedicated to the production of precharged pneumatic airguns.

The third thing that happened sounded like an afterthought to me at the time. After my presentation, in which I assured Crosman that they had the perfect entry into PCPs with the project they were about to undertake, Production Manager Ed Schultz, himself an airgunner, asked me privately if I thought this new technology could be applied to their target rifle, the Challenger 2000. He wondered what I thought of a PCP Challenger, perhaps fitted with a Lothar Walther barrel.

At the time, it seemed to me like Ralph Maccio, the Karate Kid, was asking if he might someday be able to take on Jet Li in a one-on-one match. However, as there was nothing to prevent it from happening, I told him I thought it was a natural and should be folded into their future plans. Little did I realize at the time that he was dead-serious. Wax on, wax off!

Telling this story now sounds like old news, because the whole world knows about the Discovery and the Marauder that followed it. And we have been seeing this very target rifle, the Crosman Challenger 2009, in news flashes throughout 2009. But now that I’m holding one in my hands I feel like a veteran returning to Omaha Beach 50 years later. We all know how things turned out, but I was THERE when it happened! Ed Schultz wasn’t daydreaming. He was envisioning the future–a future that has finally arrived.

The original Challenger 2000 was always supposed to be a challenger to the highly successful Daisy Avanti 853, the rifle that has dominated youth 10-meter competition for several decades. It had features that made it better than the Daisy, too. It was easier to cock and to load, which meant a lot when the kids competed in the prone position. It had a more ergonomic stock. And I felt that it had a better trigger.

On the minus side, the Challenger was never as accurate as the Daisy. Accuracy being what it is to competition, this shortcoming was the kiss of death for a target rifle–even for one that competed on the basis of price. The Challenger also operated on CO2, which wasn’t a liability, but was a concern for some coaches. The shooters stayed away in droves.

This is what I saw when I opened the box. I removed the manual from the box. The white box contains the sights.

Crosman Challenger 2009
This new model is a precharged pneumatic that also has the possibility of operating on bulk CO2. Yes, it is a true Dual Fuel airgun, and I want to set the record straight right now. Ed Schultz invented the Dual Fuel concept, as far as I know. I know that I did not include it in my initial presentation to Crosman. He surprised me with it at our second meeting, where he showed me the first prototype of the Discovery. He was surprised that I had been right about a 2000 psi air charge being just as powerful as 3,000 psi, and I was blown away by his idea for dual-fuel operation.

The trigger is the same one I have raved about in the Marauder. And you’ve probably read enough reviews of this trigger from owners and other sources by now that you know it’s a winner.

The barrel is a Lothar Walther. I believe Crosman could put their own barrel on the rifle, because I see no difference in accuracy, but target shooters do not follow the world of sporting airguns. They’re a tough bunch to please, and if they need that pedigree, it’s wise to let them have it. I’m going to shoot this rifle at 10 meters and let the chips fall where they may–though I have a pretty good idea of where that will be.

The stock is very ergonomic for a Sporter Class rifle. The original Challenger 2000 was also ergonomic. The Daisy 853, in comparison, is a two-by-four.

This rifle cocks easily. I knew that from testing the Challenger 2000, however, shooters who have never seen one of those are going to embrace the new rifle.

The rifle weighs 7.3 lbs. That’s just two tenths under the maximum permitted in the Sporter Class. It’s as if Crosman knew exactly what they were doing!

The rifle I’m testing comes with target sights. But a version of the same gun can be had without any sights. I DO NOT want to hear any sob stories from people who buy it without sights and then complain about the lack. That’s why the price is lower, and it’s done for shooters who already have sights they like. The sights come with a complete set of inserts, and the aperture insert is already installed.

The rifle does not come with a fill device. I HIGHLY RECOMMEND getting a Benjamin pump with this one. That’s how many top competitors fill their rifles, so no discussion about heartbeats after pumping. You fill to only 2,000 psi, which is a walk in the park for a healthy adult. The intake fixture is a male Foster fitting, which the pump is set up to accept.

We’re living in some very strange times. When AirForce started showing their Edge target rifle to the NRA and the CMP, they met a wall of resistance. The arguments were many and varied, but they seemed to boil down to one thing, “It’s not a Daisy 853!” Now, Crosman is bearding the same giant. I’m old enough to remember in the 1960s when race fans were just as concerned about the new Indy-car designs because they weren’t Offenhausers. Heck, I was one of the Luddites in that controversy! Change is a scary thing. But it’s inevitable, and today its name is the Crosman Challenger 2009. 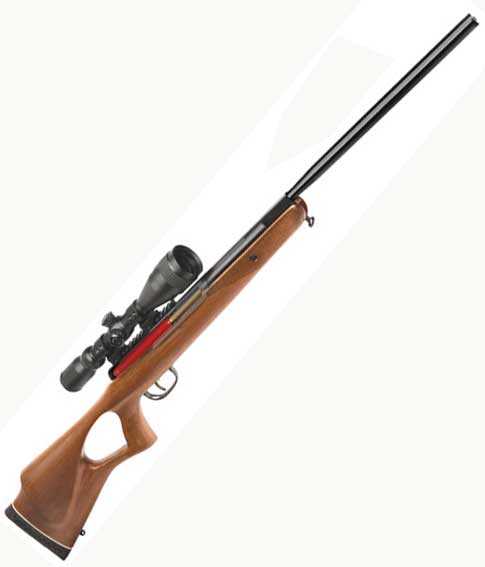 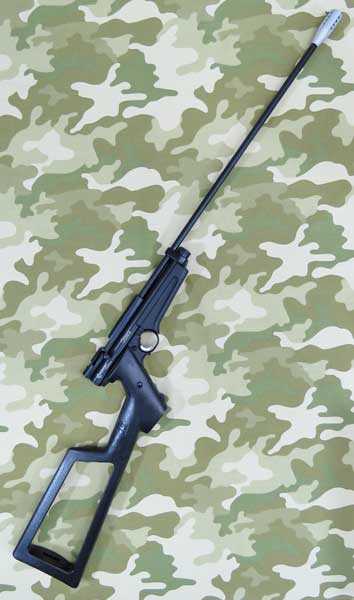