Before we start, I’ve got a new video article posted on Pyramyd Air’s site:
How to hold an air pistol for greatest accuracy.

While I’m in NY filming the TV show, I’m drawing on some articles I wrote a few years ago. This blog about the Taiyo Juki air rifle originally appeared in Airgun Revue #2, which was published in 1998 and is now out of print.

Even if you’re not new to adult airgunning, the name Taiyo Juki may be one you haven’t heard before. I heard about the company only recently, which is no doubt due to the fact that their airguns have never been even remotely mainstream in the US. But some collectors seek them eagerly, which is how our subject rifle came to us for review.

Alan Becker, the “Schimel man,” called me with an offer I could not refuse. He had recently acquired a Taiyo Juki repeater that was quite unusual and interesting to him, and he wondered if I would like to give it a test drive. He told me that a certain collector had already spoken for it, but he sold it with the stipulation that I’d be given a chance to evaluate the piece before it went to its final home. Alan figured something as strange as this only comes along rarely, and he wanted as many airgunners as possible to benefit from the experience.

I won’t attempt to go into the history of the company or to describe the other models in their line. I’ve learned what little I do know from discussions with Greg Fuller, Steve Gibbons, Davis Schwesinger and Don Gunder, to name a few. Certainly, there are several other models of rifles in the Taiyo line, and collectors of Pacific Rim airguns scramble over each other whenever one becomes available.

Our subject rifle is called the Taiyo Deluxe and is a five-shot, bolt-action repeater in .177 caliber. It’s powered by bulk-filling with CO2 from a convenient fill tank, just like the Crosman bulk-fill guns. In fact, the Crosman tank works fine with this gun. Other than those simple specifications, though, this is a most unusual air rifle, as I’m sure you’ll agree after examining it.

The gun is short, but not necessarily lightweight, giving a feel of substance when held in both hands. The receiver is very wide, which translates to some added thickness in the stock at that point. Note the unusual cover over the action. It’s stamped metal on this example, but Steve Gibbons has seen one with a solid cover machined from a block of metal. What a feel that gun must have! The markings that look like engraving on top of the receiver cover are either painted or a decal. I was never able to determine which.

Above the receiver cover, two aluminum scope blocks extend upward like the mounts on expensive target rifles from decades ago. This is a strange look in an air rifle, but it seems to fit the Taiyo Juki ambiance quite nicely. The blocks are small, in comparison to what we see on modern air rifles; and, being made from aluminum, they are very fragile, too. Since this was a borrowed gun, I was very careful not to gouge them when tightening the ring base clamps, which would have been an easy thing to do with modern mounts. Of course, this is a CO2 gun, so there’s no need to over-torque the mounts because recoil is virtually non-existent. 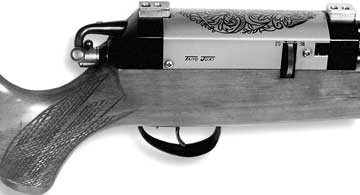 The power adjustment wheel moves forward for power, to the rear to back off. Note the two tiny aluminum scope blocks.

No doubt your keen eye has already come to rest on the vertical wheel that protrudes from the right side of the receiver cover. Although the characters both fore and aft of this wheel are Chinese, any airgunner worth the title knows instinctively that this arrangement is a power adjustment feature. And you don’t have to read Chinese to know which way to go, either. Just figure out whether tension is being increased or decreased on the hammer spring, and you’ll know which way the power is going. There are also detent stops every quarter turn of the wheel to help with final adjustments.

[NOTE: We did say the characters on the gun are Chinese. One of our faithful readers, George Chiu, gave us the translation for them. They read “strong” and “weak,” appropriately enough. He tells us that the Japanese didn’t have a written language until the 10th century, when they went to China and brought back theirs. Many of the characters have been preserved down through the centuries, including these two. The character for “weak” is represented by two feathers. “Strong” is characterized by a person drawing a bow. Our thanks to George for providing this information.]

I tested the rifle on high power over an Oehler 35P chronograph at 74 deg. F and found that RWS R10 pellets move out the bore at 680 f.p.s. average velocity with–get this–only a 3 f.p.s. variation in a 10-shot string! That’s extremely close for any gun, not to mention one that runs on bulk CO2.

When I dialed the power wheel back to the lowest point, velocity dropped to 283 f.p.s., but the spread was a staggering 72 f.p.s. In all fairness, though, it was only the first two shots that caused such a large spread. Throw them out and the spread was a respectable 5 f.p.s. Crosman Copperhead wadcutters averaged 686 f.p.s. on high power, and Alan sent along his results with 7.9-grain Premiers–701 f.p.s. at 80 deg. F. So, the rifle falls well into line with other .177 CO2 guns having short barrels, like the Crosman 187.

The bolt must be cocked to fill the reservoir, which is common in a bulk-fill gun. What is not common is a secondary “hold back” notch to secure the hammer from firing accidentally. Just twist the bolt handle down to the right when it’s pulled all the way back to cock and it engages a safety notch. What a bright idea! Now there’s even less of an excuse for any unfortunate incidents while the shooter is working around the business end of the gun.

Another feature I find fascinating is the safety. It allows the shooter to select automatic or manual safety operations! You can set it to come on automatically when the gun is cocked, or to stay put until engaged by the shooter. What a remarkable design! It also demonstrates the amount of trust Taiyo Juki had in their customers when the gun was made. I don’t think we’ll ever see something like this again, as long as the world continues to pursue its current litigious course.

Alan had to repair the rifle before shipping it, which gave him the opportunity to go inside. Since I’m in no way a qualified CO2 repairman, I stay out of the workings of gas guns; so I’ll use his description of what he saw. First, he says the bolt is adjustable for seating depth. Since the gun has a tight breech, this feature allows the shooter to adjust each specific brand and type of pellet to the best level of performance. If you think about it, though, you won’t want to be doing that much work all the time; so it’s best to settle on one pellet and then do the adjusting one time. I don’t know of too many other pellet rifles with this option; so, once again, the Taiyo repeater demonstrates its innovative design.

At the bulk-fill adapter, there are o-rings, instead of the more common flat seal. As a result, the bulk bottle doesn’t need to be screwed tight all the way before opening the valve. The o-rings catch and prevent gas loss by their design. Not a big deal, but it shows the level of attention that went into each small detail of the design. Alan found that a 3.5-oz. paintball tank could be left attached to the gun, giving many more shots than a single fill. Sort of like the Crosman CG rifles–reinvented.

He also reports that the gas valve is novel in that it has a two-piece valve stem and seal with a threaded stem, yet it’s the same size as the Crosman 160 valve assembly. The Crosman bulk-fill valve stem assemblies have threaded stems as well, but the 160 is a simple press fit that makes repair more difficult. Alan was able to cut and fit his own new seal because of this design, which not only made it possible for him to repair this rifle without a source of factory parts, but it also allowed the use of whatever hardness of seal material he wished to use. 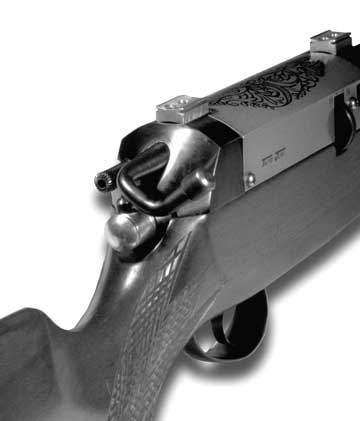 The word “goofy” comes to mind when looking at the bolt handle. I’m sure the committee that designed it had their reasons.

Back outside the gun once again, the bolt handle also qualifies as a curiosity. It’s the most convoluted lever I’ve ever encountered. So strange is the shape that it gives rise to the suspicion it might be convertible from right- to left-hand operation. I have no way of proving that, of course; but if that isn’t the explanation, then a madman was loose in their design shop! 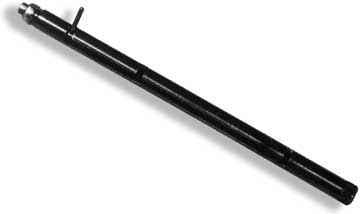 The magazine is long for only five shots; otherwise, it looks quite conventional.

The five-shot in-line magazine is conventional, in that it mimics others, like the earlier Crosman 118 and even the Crosman 400, somewhat. A slot through the left side of the receiver cover and the receiver block allows visual inspection of remaining ammunition. For safety’s sake, always remove these magazines before attempting any work on the gun, such as in the case of clearing a jammed pellet. 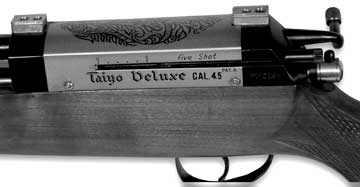 Here you can see the window that counts the pellets remaining. The button sticking up on the shaft under the bolt is for the variable safety.

Feeding was fairly smooth, although all these bolt-action repeaters with in-line magazines have little hang-ups sometimes. Even the Crosman 600 semi-automatic is known to occasionally catch pellets on the walls of the magazine. Only the Korean-built Career 707 lever-action rifle seems to have completely solved the problems of in-line feeding. I have never experienced a single hang-up in well over 10,000 shots with several 707s.

With the Taiyo repeater, however, it helps to develop a rhythm to the bolt–never going faster or slower than what the gun seems to demand. Do that, and you’ll have very few problems, as long as you use pellets the gun likes. Clearing a jam is a matter of removing the magazine and tilting the gun on its left side while fiddling with the bolt. Crosman 118 and 400 owners will be familiar with the drill.

I didn’t do a lot of accuracy testing; just enough to know that the gun falls into the very accurate category with others, like the Crosman 167 and 113. The reason I didn’t do more was the relative softness of the scope blocks and my desire to not injure them in any way. My scope was, therefore, mounted with great care not to bite into the soft metal. Screw holes at the front of the barrel suggest that open sights may have either been provided or were at least an option. The rear scope block would easily accommodate a nice sight of some sort–probably an aperture, which the accuracy of the gun surely warrants.

I was glad to have a chance to review this most unusual air rifle. Because it hasn’t really been imported to this country, it remains an exotic that only a few collectors can own; but it’s nice to know things like this exist. Certainly, it would provide a wonderful study of airgun innovation for domestic manufacturers.

Our thanks to Alan Becker for the loan of this unusual rifle.