With a title like that, I’m sure you expect a laundry list of fine airguns, but the truth is, I didn’t get a single airgun for Christmas. In fact this report is not really about airguns, though it will touch on them more than a little. What it’s really about is contentment, because that is what I really got for Christmas this year.

Tools!
Although I try not to work on airguns and firearms any more than necessary, there are times when it cannot be avoided. My tool kit is small, as a result of this policy, but this Christmas it received some important additions.

Edith did a lot of online shopping for me at Duluth Trading Company this year, and I received three zippered pouches full of magnets, dental tools and small screwdrivers. I wept! I had been slowly putting a tool kit together because I always needs things like these and in one day with three presents she quadrupled my inventory. What thoughtful gifts. 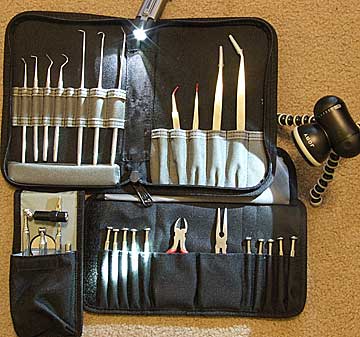 These tools and lights make my fixing jobs easier.

Lights!
Along with my tools came several handy lights I can use for those nasty places where the room light never shines. The inside of spring gun compression chambers, for instance. Now, I can look inside and shine a light inside at the same time, where before my own shadow was my worst enemy. I’m always working some place dark, and I can never have too many powerful lights.

Big gift
Not many people would ask for a work-related item for Christmas, but then not many people have the perfect job. For several decades, I have secretly harbored the belief that the .30-30 Winchester cartridge is the most accurate cartridge ever created. That belief, for which I have zero proof at this time, is not a popular one. I daresay I am one of the few shooters on planet Earth who believes that. But not the only one. My best bud, Mac, admitted this year that he harbored a similar belief. That admission, coupled with a single, probably atypical five-shot group shot at 50 yards from a Winchester model 94, four of which are very close, stoked up my interest to the point that I just HAD TO KNOW! You guys know how that feels. 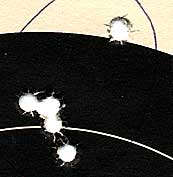 Four of the five shots are grouped pretty tight–especially for coming from a 94 Winchester!

So, I’ve set before me a multi-year project that will involve reducing the error of the .30-30 round until I reach the point where I can’t go any further. I won’t say just how accurate I think it can be, but it’s way less than a one-inch 10-shot group at 100 yards. Way less.

With that as a goal, Edith gifted me with a Remington 788 in .30-30. Now, for those who are unfamiliar with that model, the 788 is to accurate rifles what the Corvette is to fast cars. By that, I mean that you hear a lot of stories, not all of which are true.

I will start testing my theory with a Remington 788, a rifle that’s an urban legend in its own right.

There’s a complete book of urban legends about the 788. It was too accurate and hurt the sales of the more-expensive Remington models, so they killed it. It has bolt-locking lugs in the rear of the bolt, so the action is springy and cannot take the strain. It was the best bolt-action ever made for rimmed cartridges, and so on.

So, not only am I about to test a theory that will be considered by most to be highly improbable, but I’m starting the test with a rifle that lives under its own cloud of superstition. Controversial, to say the least. And that’s probably why I like it.

I love controversy. I love hearing why Crosman could never make a PCP in the United States, and then listening to the crickets chirp when they made not one but four in two years. I loved reading on a popular forum in November of 2009 that AirForce would probably not bring out the Edge for another year. I smiled when some person wrote a story about hunting deer with a Career Dragon Slayer, in which he said he was probably the first person in history to have killed such a large animal with an airgun.

And, in three weeks I’ll be in Las Vegas at the 2010 Shot Show, trying to stir up more controversy in the airgun world. I can’t wait!

So, were does contentment come it? Why, with you guys, of course. This blog has evolved into the nicest place on the internet, in my opinion. And I no longer have to know everything, because you guys cheerfully chip in and help the new airgunners find answers to their questions. I’m finally involved with a website where people are more intent on enjoying their hobby than with passing rumors and sniping at each other.