Don’t forget today’s Facebook event from 10 to 11 a.m., Eastern. I’ll be answering airgun questions on Facebook on this Pyramyd Air Facebook page. To see the discussion, you must have a free Facebook account. You do not have to be a recognized Friend of Pyramyd Air to ask me a question.

If you want to set up a Facebook account, register on the link provided above. Once you have an account, sign in and then click on the link above once more to go to the page. Please join me, if you’re able!

On to today’s report. On Wednesday, two important things happened. One was a reader who commented that his reluctance toward precharged pneumatics was based on fear. I can understand that, because it was my reason for staying away from them, too. I saw the movie Jaws and remembered the shark blowing up when the scuba tank was shot with a Garand. Of course, in 1995, when I started with PCPs, the Mythbusters TV show didn’t exist, so nobody had yet demonstrated on television how false and “Hollywood” that explosion really was. It served as a big caution to many like me who also saw it.

The other important thing that happened on Wednesday, happened on the range. While testing a new pellet in an AirForce Condor, the pellet, which was tight in the bore, caused the Condor’s valve to stick open and exhaust all the air in the 490 cc Condor tank in less than a second. My shoulder was shoved straight back about three inches, which is about the same distance that a Winchester .458 Magnum cartridge will push me back. There was no pain, though, because the push was a rocket-like event rather than a sharp jolt, but it served to remind me of just how much potential power is in one of those tanks.

Today, I’m going to address the issue of fear. I will tell you what I know for certain and what I have reliable reports for. I will not speculate.

Scuba-tank rockets
If something strikes the valve on a scuba tank hard enough to break it off, will the tank become a lethal rocket? Yes, it will. You don’t have to look any farther than the Mythbusters to watch such an event. It will take you to a Mythbusters fan club website where what was shown on the TV show is discussed in print. So, if you don’t want to watch a video, this place will still give you what you need to know.

When I was in Germany in the 1970s, a large oxygen welding tank tipped over in one of our motor pools and the valve struck something hard on the way down. The valve sheared off and the tank took off like a rocket. It did a lot of damage but, fortunately, no one was hit. My experience on Wednesday with a 490cc Condor tank exhausting all its air through the valve is another reminder of what can happen when everything lets go at once.

Scuba-tank explosions
Never saw one, heard of a couple third-hand. But a hydrostatic testing station once told me that in ten years of operation they had one scuba tank fail catastrophically (explode). It failed at the threads in the neck where the valve is attached. They told me the threads are the most common place for tanks to fail. But this one failed while under test, which means it failed when it was filled with water instead of air and was enclosed inside a larger pressure vessel buried in the floor of the facility. There was a loud sound when it failed, but nothing else happened, because water is not compressible. When something fails that is full of pressurized water or hydraulic oil pressure there cannot be a dangerous explosion.

PCP reservoir explosions
Only heard stories. Nothing that I can confirm.

PCP fill-hose explosions
This I had happen to me, personally. It was with my first Daystate Huntsman. The fill hose was a rubber hose that wasn’t armored, and it exploded while I was filling the rifle. The hose was operating at the maximum allowable working pressure for which it was rated, which is cutting things thin. The hose suddenly developed a bubble the size of a walnut and exploded with a noise that sounded like a concussion grenade to me. I’m sure it was nowhere near that loud, but I was stunned for several seconds. After that happened I started paying some attention to the hoses I fill from. Now, I use either a hose that has an armored outer shell of woven steel wire, a microbore hose rated for much greater pressure or refill clamps such as the one AirForce makes that don’t have any hoses.

PCP rifle explosions
Pyramyd Air has a Korean rifle in their possession that a customer tried to operate on pure oxygen. He called Josh Ungier and asked why there were blue flames coming out of his gun when it fired. After discovering what the guy was doing, Josh advised him that he was risking his life, but the medical technician told him that the oxygen was free to him and just too convenient not to use. Here are some photos of the gun that was finally returned to Pyramyd Air for repairs. 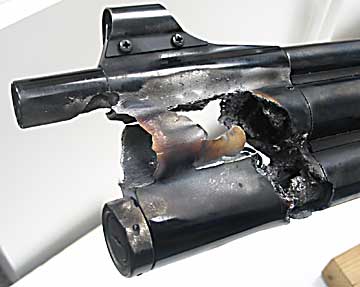 This is what happens when a VERY HOT flame is held against aluminum for a long time! It looks like a cutting torch has been used on this gun from the inside out. This is how the Korean PCP looked after it caught fire and burned from using pure oxygen as a propellant. Yes, the stolen oxygen was cheap until this happened. 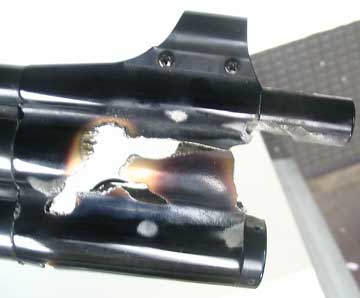 Note the discoloration of the anodizing. Forensic scientists use clues like this and the bending of the steel barrel to determine how much heat caused the damage and how long the fire lasted. An oxygen fire is a dangerous thing. This rifle was returned to Pyramyd Air as defective by a person who had been warned not to do this.

Besides this one example, I have heard a few stories of air rifles exploding, but all of them were third-hand. Nothing can be verified.

Some common sense
To complete my PCP dangers report, I thought it would be nice to reflect on some things we know for sure. For starters, many of us operate multi-pump pneumatics without fear. They operate at a pressure of 1,200-1,500 psi, according to an experiment done by W.H.B. Smith back in the 1950s. And we use CO2 guns without fear. They operate at 853 psi at 70 degrees F. But CO2 pressure rises very fast as the temperature rises. On hot days, CO2 guns will climb to over 1,100 psi. If you leave them sitting out in the sun, they’ll either lock up from too much pressure or, if you have tanks with burst disks, they can rupture and exhaust all the gas.

We’re comfortable to the point of ignorance when it comes to pressures up to 1,500 psi. Therefore, the Benjamin Discovery, which operates at just 2,000 psi, should be a PCP that’s close to your tolerance threshold.

Meditate on this for a moment. You’re in no greater danger when riding in a safe rowboat that’s floating above a 35,000 foot deep ocean trench than you are sitting in the same boat above an 18-foot hole on a bass pond. The concept of floating remains stable regardless of the depth of the water. Pneumatic safety is a lot like that. Yes, the danger is real and present, but the equipment makes it safe.

Pneumatic equipment is designed to withstand way more punishment than it will receive in normal use. It’s even engineered to be safe well beyond the operational limits specified on the equipment. But a hot-dog experimenter can set himself up for disaster very quickly, and high-pressure air can be very unforgiving.

I worked for three years in the AirForce Airguns plant. I worked around high-pressure air every day and yet in all that time the only “accident” I saw was caused by a customer who did a very stupid thing. He popped the safety burst disk on his air tank with a sharp pointed instrument. I don’t know why he did it, and they never tell you the truth when they tell you their story, but absolutely nothing bad happened. Examination of the disk showed that the metal was bent inward, not outward as a rupture would have done.

I have found that, among thoughtful adults, familiarity with potentially dangerous things doesn’t breed contempt as much as it fosters confidence. After you’ve survived a few months of PCP operations and the scuba tank in your basement/garage hasn’t blown the house off its foundations, the occupants of the household start to focus their concerns on other things. If you’re a shooter, for example, you may also live with a lot of loaded ammunition in your house. As a reloader, I store many pounds of gunpowder in the house, including several pounds of black powder that is classified as an explosive. Yet gunpowder may not be the most dangerous thing in your home.

One of the last jobs I did in the Army was investigate an apartment explosion that ruined three brick apartments in an 8-plex. The cause was a 5-lb. propane tank that was less than half full. Mud dauber wasps are attracted to the aroma of the garlic-like trace scent that’s put into odorless propane gas so leaks can be detected. They like to build nests inside the gas lines. One family thought their barbeque grill tank was empty when the flame went out in late fall, so they stored the barbeque for the winter inside an entrance room at the rear of the house. The fire chief believed that some time during the following spring the mud dauber plug in the gas line loosened, allowing propane to fill the bottom of the room with gas. Then, when the electric compressor motor of the freezer in the room kicked in early one morning, a spark ignited the heavy gas that blew the three apartments wide open.

A pound of black powder won’t do that much damage. Maybe 10 pounds will, but I don’t know. However, my point is this, we’re surrounded by dangerous things at all times. Knowledge, and not fear, is the best way to deal with them. Precharged pneumatic airguns are no more dangerous than parking an automobile full of gasoline in a garage that’s attached to your house.