Before we begin, I have to share a laugh with all of you. This is especially for BG_Farmer, who last week had a discussion with me about unloading a muzzleloader.

I was out at the range yesterday and among the guns I shot was my new Thompson/Center Hawken. Of course, the sights were open post and bead. Shot No. 1 went through the X-ring at 50 yards. So, I loaded ball No. 2 very carefully. And, I put a cap on the nipple only after I was in firing position. Then–nothing! The cap fired but nothing else happened.

I waited for about 30 seconds for a hangfire, and then the truth of it hit me. For the first time in 45 years of shooting muzzleloaders, I had failed to put gunpowder into the rifle! So, my status as the Master Doofus of the Universe is, once again, secure–and I have a ball to get out of my barrel. Fortunately, I was using Triple Seven powder, a replica powder that doesn’t attack the bore like black powder. 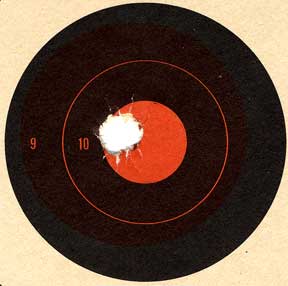 The first shot from the Hawken muzzleloader went through the X-ring at 50 yards. Shot two is still in the gun.

So, all that talk about how I never had to unload a ball before just went away. BG_Farmer, you may have 12 hours to gather a crowd to mock me.

Now, on to today’s report

Well! This report that I thought would be finished today is turning into quite the crowd-pleaser. Just two days ago, we had a comment from a reader named Simon Kenton who remembers his 124 fondly as being a real tack-driver with the vintage Beeman Silver Jet pellets. He stockpiled 5,000 of them and hates to shoot them because they aren’t available anymore.

I also remember Silver Jets as the best pellets for the 124 back in the 1970s and ’80s. But when I competed in field target with a 124 in the late 1990s, I used the 7.9-grain Crosman Premier, which, at the time, was considered the most accurate pellet in the world. And I’m referring only to the Premiers that come in the brown cardboard box.

So, I’ll test this 124 for accuracy with Silver Jets and Premiers, and perhaps even some JSB Exact 8.4-grain domes. Sorry Kevin, but I don’t seem to have any Beeman FTS. I have Trophys, but that’s all.

Please don’t worry about the status of the gun. If something happens, it’s only an airgun after all. I’ll do everything to protect the exterior finish, but if I have to rebuild the powerplant for any reason, the rifle will only get better as a result. And after I rebuild it, it will last many decades longer than it would have with the original parts. We know that today, but of course it was not known when the 124 was new back in the 1970s.

For the collectors
And I need to clarify a point for all the collectors. I said in the first report that the 124 dated back to 1972, but that isn’t entirely accurate. The basic rifle did exist at that time, but in the United States it was called the F-12. In Germany it was called the model 121. The 124 was first called by that designation in the 1974 edition of the Beeman catalog–the ultra-rare second edition. In that catalog, Beeman explains that the 124 is an upgraded version of the F-12 rifle that previously existed. That probably means the 124 designation started some time in 1973. Yes, there are FWB sport rifles marked as model 121, and yes, they were also capable of velocities up to 780 f.p.s. When the exact upgrades were made that differentiated a 124 from a 121, I do not know; but it sounds like a great research project for some day when I’m tired and just feel like reading.

The .22 rifle
To round out the report, there was a .22 caliber version of the same rifle that was marked as the model 127. They were never as popular when the gun was being made, because in those days .177 caliber was king in the United States. Finding a 127 is more difficult than finding a nice 124. However, for some reason, the price is seldom that much higher. The 124 still holds sway over the 127, even today.

The Beeman R5/model 125
Beeman also had a very small number of 124s barreled in .20 caliber and labeled model 125. It was never an official model, but Robert Beeman was very keen on .20 caliber and was seeking at the time to create an R5 rifle for his line. Beeman remembers three or four of these rifles being built by Feinwerkbau. They were not marked with the R5 designation, though that was the plan once production began.

What stopped the project cold was the requirement to purchase .20 caliber barrels 5,000 at a time. Beeman was prepared to order 500 of the R5s, but he wasn’t ready to commit to 5,000, so the rifle was never built. Two of the prototypes, marked as “Sport 125 Cal.5/.22” were sold from the Beeman used gun list. The company also advertised the new R5 in their 10th edition catalog; but since there were no guns to sell when that catalog came out, the price was listed as NA. Catalog 10A followed the same year, and the R5 model was removed. Many people who have seen just the 10th edition of the Beeman catalog believe that a Beeman R5 existed, when in fact it never did. Robert Beeman wrote a very detailed description of all that transpired on this project for my magazine, Airgun Revue #3.

Today, I want to show you more of the contents of this sarcophagus. I’ve already discussed why filling the barrel with common grease is not a good protective measure, so let’s look at some other preservation techniques that backfired.

Baggies don’t protect
The orignal owner also felt that Beeman Silver Jets were the best pellet for the rifle. Instead of making a single storage compartment for the square cardboard box the Silver Jets came in, he divided 500 pellets into two plastic bags that were tucked into smaller asymmetric compartments. You can see them in small slots on either side (the top and bottom) of the rifle’s forearm in the case. Unfortunately, he was unaware that plastic bags are not an effective vapor barrier. Over the years, the acid wood gasses corroded all the lead pellets to the point that they’re now covered by a thick coat of white lead oxide powder. These pellets are now useless. I leave them in place as tutorials for whenever I show the rifle. 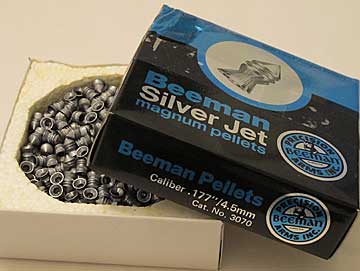 Beeman Silver Jets came in a square box with a padded styrofoam insert. These pellets are 20-30 years old and not oxidized.

Silver Jets on the left came from the box. The oxidized one on the right came out of one of two baggies inside the gun box.

Another fact the original owner was unaware of is the tendency for the original FWB piston seal material to dry rot. He purchased three spare piston seals that are now, sadly, hardened to the point of uselessness. The plastic bag they’re in also did noting to preserve them. That’s okay, though, because I would never put an original FWB piston seal back into a rifle anyway. I would use something made from modern synthetics. Feinwerkbau wasn’t alone in making this mistake. Diana also used the same flawed material in their target air rifles and pistols of the 1970s, as did Walther. 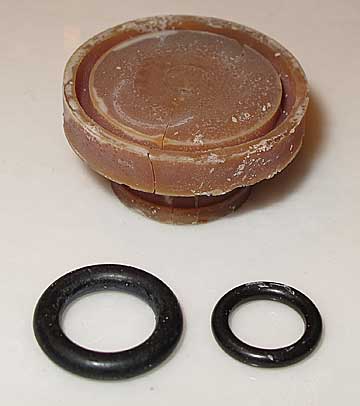 You don’t have to be an expert to see the damage here. The piston seal is dried and cracked from storage. Each of the three seals has two o-rings. The larger one is the breech seal, but I don’t know where the smaller one goes. These are still usable.

The rest of the inventory
For those who like to keep score, the box contains these things, besides the rifle and owner’s manual:


None of these products have been used. They are there for “that day” when they are needed.

And, now, the velocity
Or not!

The Crosman Premier pellets refused to come out of the end of the barrel. They went perhaps 7/8 of the way through and stopped. I checked and replaced the breech seal, but no luck. That means the piston seal has finally given up the ghost. The last time I shot this rifle through a chronograph, it registered about 760 f.p.s. with Premier Lites, but that time is past. And the parts in the gun are of no help in fixing the situation.

I left the first part of the blog exactly as I wrote it, so all of this that you are reading has transpired before your eyes. I will now tune the gun with a modern FWB 124 tuneup and then test it for you.