The entries for Pyramyd Air’s February contest are posted on Airgun Arena. Thanks to everyone who participated and congratulations to the winners!

Today, I’ll test the Air Venturi Bronco with a better scope. Last time, I used a scope adjusted for 100-yard parallax and the target wasn’t too clear. This time, I mounted a Leapers 3-9×40 AO scope with an illuminated reticle. My scope was an older version of this same scope. 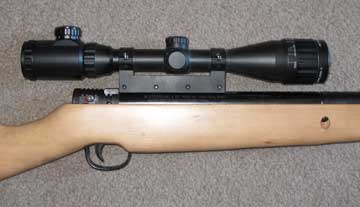 A delight to shoot
I’d forgotten how comfortable the Bronco is to shoot. Rediscovering that was so pleasurable that I did some additional experiments for you. For starters, I held the rifle like a deer rifle, the way a new airgunner might. The Bronco responded with half-dollar-sized groups at 25 yards. While those look good to new shooters, the rifle is capable of much better accuracy. The tight hold works, but only to a point.

Then, I shot with the rifle rested directly on the bag. Sprayed pellets all over the place, just as you would expect.

I read on one of the forums that someone thought the wrist was too thick for younger shooters. Well, of course it is! If they hold the rifle like a deer rifle, the wrist is way too thick. But that’s not the way to hold a breakbarrel springer. You have to pretend you’re holding a 1903 Springfield and place your thumb along the wrist rather than over it. Then, the artillery hold will start paying off. 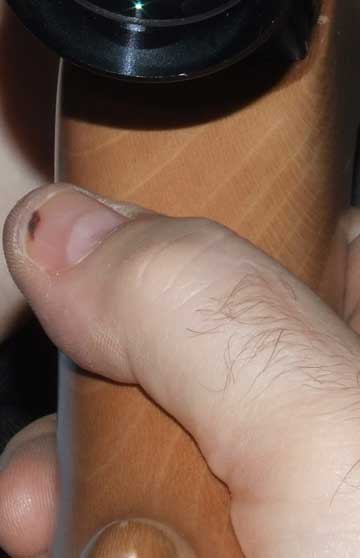 This is the wrong way to hold a spring rifle. Get that thumb off the wrist. 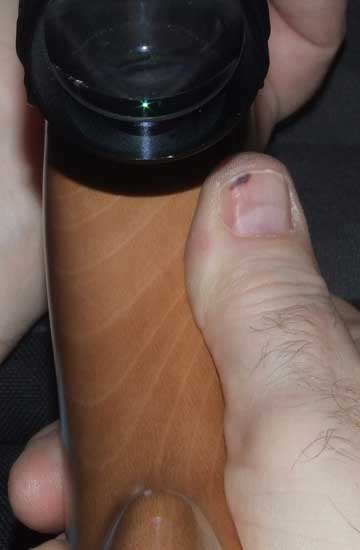 This is the proper way to rest the thumb on a spring rifle wrist.

The bottom line is the Bronco likes a light artillery hold the best.

Premier Lites
The Crosman Premier 7.9-grain pellet grouped acceptably well at 25 yards, though I did feel that a repeatable light hold was crucial to good accuracy. Fail to hold it that way, and pellets stray from the group. 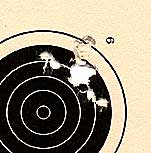 Ten Premiers at 25 yards with the proper “dead” hold technique. 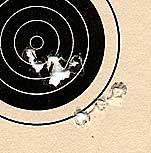 Ten Premiers at 25 yards. Seven with the proper “dead” hold technique and three with the thumb rested over the wrist. The scope was adjusted from the first group.

I also tried a bucket load of other pellets, searching for one that was more tolerable of the hold than Premier Lites. I tried Premier heavies, Gamo Match, Air Arms domes, JSB Exact domes in the 8.4-grain weight and Gamo Master Points. Like last time, the JSBs showed some promise, though the Premier lites clearly beat them in 10-shot groups. Then, I found what I was looking for.

Years ago, I owned a .458 Winchester Magnum rifle (an elephant rifle) for which I handloaded. My load was so soft that it hardly recoiled, yet it always sent the 550-grain lead bullet to the same place. It was a delight to shoot. Most Hakim air rifles will do the same thing with RWS Superpoints. Well, I found what the Bronco likes.

Beeman Kodiaks, which are also H&N Baracudas, need very little in the way of an artillery hold, yet they seem to go to the same place every time. They’re no more accurate than Premier Lites, but they sure are easier to shoot in this rifle! They’re my top pick for pellets, now that I’ve tested them. 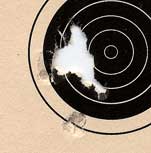 Ten Kodiaks with a sloppy artillery hold. They all seem to want to go to the same place.

The next test will be with a Mendoza peep sight mounted. This will be as much a test of that specific sight as of the Bronco. 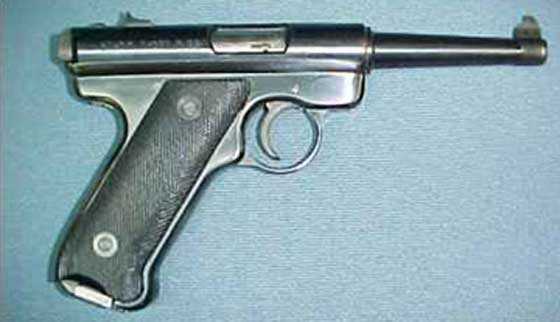 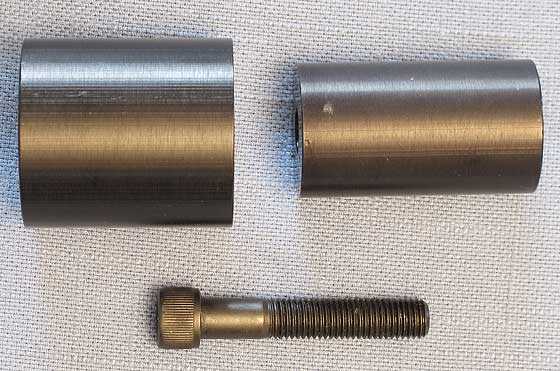