The Crosman 118 – A gallery rifle that went public

Update on Tom
I visited Tom last night, and he’s been moved into the ICU. His infection is getting worse, not better. After I visit him this morning, I will update you in the comments section.–Edith

Now, on to today’s blog, which comes to you from Airgun Revue #2, which was published in 1998.

The Crosman 118 looks mundane, unless you know what it is and how it works.

In the early 1950s, most American airgun buyers were not very discriminating. Their tastes ran to Benjamin and Crosman pneumatics, as well as to the ubiquitous Daisy BB gun. Most knew nothing of the fine precision airguns being made in the UK and Europe, and only a few more were aware of the fine Sheridan model A (Supergrade) that was being made right here in Racine, Wisc. It was a time when .22 rimfires held sway among the largest number of shooters, because rimfires were so easy to shoot almost anywhere. So, when the Crosman Corporation brought out a new CO2 repeating air rifle–the model 118–at a price of $34.95, it must have shocked many people.

Actually, we now know that the gun that became the model 118 was not originally offered to the public. It started out in 1947 as a .21 caliber gallery gun with a hose connected to a bulk CO2 tank under the counter. In that configuration, it was designated the model 117. That gun was made at roughly the same time Crosman was also plying companies with its shooting gallery, which is a long story in its own right. The short version is that Crosman was selling complete shooting galleries, including the guns that went with them, so companies could start shooting leagues for their employees. The guns used in these galleries were the CG-style rifles. CG stands for “constant gas,” as the 4-oz. bulk tanks held enough gas for many shots. The public couldn’t buy just one CG rifle over the counter, either; they came as sets with the galleries.

Crosman developed the 117, which connected to a bulk tank via a hose from the underside of the fore end, just in front of the gun’s internal valve. Except for how the gas got into the gun (and the caliber), the 117 looks identical to the 118–a fact that airgunner Steve Gibbons recorded on film at a SHOT Show and shared with The Airgun Letter readers in 1995. In 1996, airgun writer/historian Dean Fletcher documented it, again, with a different photo and a brief history, which appears on page 182 of his big book The Crosman Rifle, 1923-1950.

The 118 was the first of three so-called bulk-fill CO2 rifles that Crosman sold to the public. The single-shot models 113 and 114 were accepted much more readily because they sold for a price of $21.95, which was much more affordable in 1952. But the 118 was never a big seller; and by 1956, it was gone from the inventory.

Let’s now take a look at this curious American classic, and see what makes it tick. Our subject rifle was purchased at a local flea market, and the former owner–an airgunner who had never heard of bulk-fill guns–unscrewed the filler cap to see where the Powerlets went. When he discovered that the reservoir was too small to accept Powerlets (which a bit of pre-measuring might have determined just as well), he wrote off the whole thing as a bad idea and sold the gun.

The first order of business, therefore, was to get the rifle resealed. Normally, a Crosman bulk-fill gun will still have great seals when you buy it used, especially if the former owner was smart enough to leave it charged with gas. But this one had been tinkered with and was leaking heavily. Precision Pellet resealed ours for $20, which is less than the 1952 purchase price. If that’s not a bargain, I don’t know what is.

The 118 is much the same kind of airgun as the Crosman Town & Country, in that it’s a short rifle that has some thickness to the stock. Curiously, both guns sold for a premium when they were new and were contemporaries in the early 1950s. Our test rifle weighs exactly 5 lbs. and measures a scant 38.5 inches, tip to tail. The 22-inch barrel is steel, as is the reservoir tube underneath. But the bolt handle, filler cap and front sight are all brass parts, which is a reversal of what one might expect. The caliber is .22. American airguns of the 1950s were very much based on our national awareness of the .22 rimfire cartridge at that time. We wanted a smooth transition from airguns to firearms, so .22 was by far the favored airgun caliber. Although .177 guns existed, collectors note that it’s usually harder to find American airguns in that caliber. And single-caliber models, like the 118, were invariably .22. The in-line, spring-fed clip requires the use of flat-nosed pellets for reliable feeding. I tried pellets with slightly rounded noses because they often do work in other airguns having in-line clips–but not in the 118. Apparently, the shearing action of the carrier that strips off the next pellet in line is pretty abrupt. 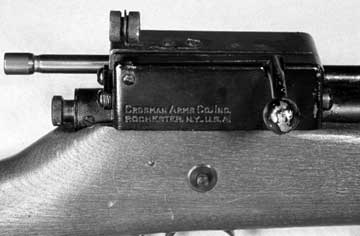 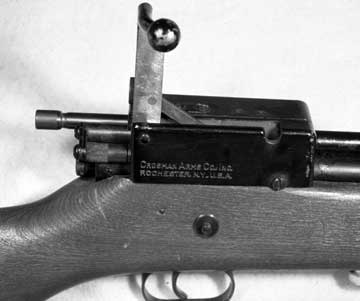 The bolt lifts straight up and back to cock and load. It’s easy to learn and delightful to do in rapid fire.

The bolt isn’t a typical Mauser-style crossbolt, either. If you examine the photos, you’ll notice that the bolt handle is pulled straight up and back to cock the gun. Lowering it loads the pellet in the barrel, which makes it ready for firing. The actual loading operation takes place beneath that rectangular plate on top of the action, but you probably don’t want to know! It works smooth enough, but our rifle did require some oil on the moving parts before it fed reliably.

I had feeding problems with Crosman wadcutters, and even more with Premiers because of their slight dome. RWS Hobbys worked okay and H&N Match worked the best. The cadence at which the bolt is cycled is also important. You have to work it like a gallery gun–with a fast and definite action; no hesitation or indecisiveness. After the final shot, the clip follower enters the pellet feed arm, effectively locking the action until the rifle is reloaded. This probably also carries over from its origins as a gallery gun.

Both the receiver and the removable clip have windows cut into their sides so you can see at a glance how many pellets are left, if care is taken to align them when loading. The clip on our rifle was missing a part–the keeper to hold the follower when the clip is loaded. It was still possible to load without the keeper, but I had to use my thumb to restrain the tiny follower projection that protrudes through the vision slot. Once the clip is fully inserted in the gun, the follower is held in place by the pellets, which rest against the feeding mechanism. The line of pellets advances only one pellet at a time into the carrier for transport to the back of the barrel. Spring pressure from the follower pushes the next pellet forward, once the hole in the carrier aligns with it.

Some features found on the more common single-shots carry over to the 118, such as a crossbolt safety that runs through the stock above the trigger. The trigger is a simple notch that retains the hammer against the pressure of a coiled spring. It’s possible to slick up a bit, but it’ll probably never be in the great category. The one on our test rifle is stiff and creepy.

At the back of the receiver is a power adjustment screw that allows the shooter to increase or decrease power at will. All it does is change the tension on the hammer spring, but that’s all it takes! You might wonder why anyone would want less than maximum power; but indoors, at close range, low power is quieter and gives more shots.

Speaking of the number of shots–for some reason, the rifle I tested was a little gas hog. Where our .22 caliber 114 single-shot often gives 60 full-power shots, the 118 pooped out somewhere between 30 and 40. Of course, there could be some differences in the valves of the two rifles tested, but a difference of roughly 40 percent is too wide a variation for that to be the only reason. I believe the feeding mechanism requires more gas because it provides a less positive seal. At any rate, you’ll want to keep a 10-oz. tank around when you shoot.

Velocity was a bit on the staid side, with Meisterkugelns going 586 with a 17 f.p.s. spread over 10 shots. That was at 67-deg. F, which is on the low side for CO2 guns. CO2 is a very temperature-dependent gas, with pressure rising and falling in a linear relationship. At 70-deg. F, the pressure is around 900 psi, which is a good operating point. 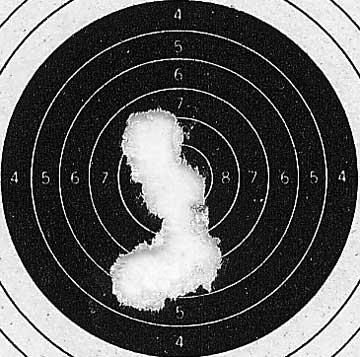 Not a great 10m group, but it’s in the right place.

Sighting is also a trifle lackluster on this rifle. There’s a peep, but it’s crude and adjusts by sliding parts and friction locking. Hence, there’s no real precision. The best groups I saw were with H&N Match pellets, which yielded five-shot groups just under 1/2″ spread, center-to-center. This could be more a function of an imprecise sight picture, rather than the fault of the gun. I didn’t spend a lot of time shooting it for the record.

The Crosman 118 was certainly short-lived. Probably the high price and the use of an exotic (for that time) gas mitigated against its acceptance by the general public. With their popular pneumatic rifles selling for around $20, there was, perhaps, too much of a jump in price up to the 118, which cost about 43 percent more. And, CO2 was far from being a popular power source in the early 1950s. Until the advent of the ever-popular Crosman Powerlet many years later, carbonic gas occupied only a minor niche among airgun powerplants, and bulk-fill guns were at the bottom of even that stratification because of the extra work they entailed. So, the rifle that might well have revolutionized the shooting gallery trade was mostly a flop when it came to the general populace. But for collectors of vintage American airguns, the Crosman 118 stands apart as one of the key pieces in a rich tapestry of airgunning in the mid-20th century. 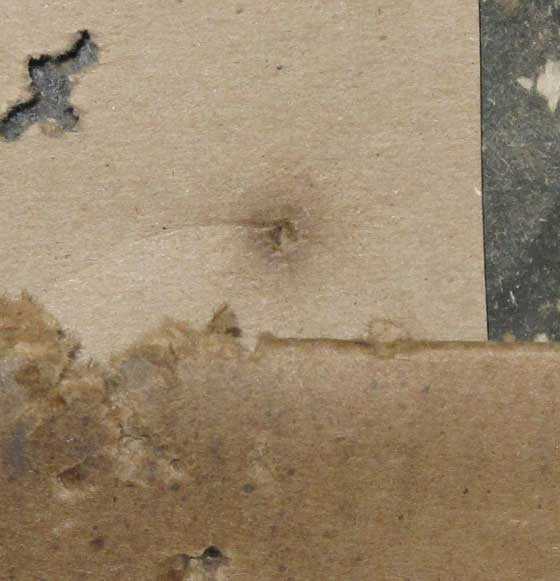