Home > Blog > Education / Training > When Savage made a folded-metal gun

Update on Tom/B.B.: Tom’s feeling better and his spirits are quite high. He had several liters of fluid eliminated from his abdomen. Turns out there was no fluid in his lungs, however the fluid in his abdomen was pressing on his lungs and made it difficult for him to breathe. His belly still looks a bit distended to me, but that might be due to having a very long needle poked into him at various angles. Tom said it was pretty painful, but he’d do it all over again if he had to.

Today’s blog originally appeared in the September 1998 issue of The Airgun Letter. 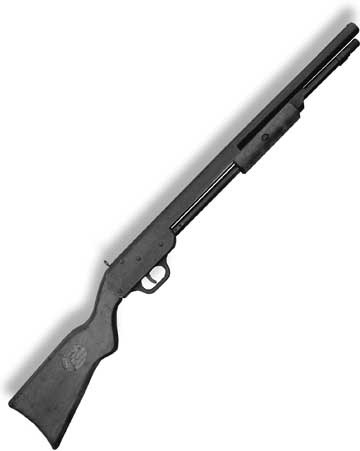 A toy gun made like a BB gun. The Savage ball-shooter must have been a young boy’s delight!

It was before World War II, when the economy was recovering from the Great Depression, that Savage Arms Company of Utica, New York, offered a toy ball-shooting long gun with a pump action.

Airgunner Alan Johnson told us he’d been a Savage employee but had never heard of this toy gun. He told us that Savage had moved their plant from Utica to Massachusetts after the war, which was the first indication that the gun was made before the war.

I first encountered one of these in 1994 at the big antique/flea market in Carlisle, Pennsylvania. I remember thinking at the time how much the gun resembled the Remington model 26 BB gun in everything except size. The Savage is just 30-1/2″ long and weighs 36 oz.; the Remington is one of the largest and heaviest of all folded-metal BB guns ever made.

The dealer who had that gun was asking what seemed like an exorbitant amount for a gun in roughly the same condition as the one pictured here–$350, as I recall. The high price put me on the lookout for another example; but until I found this one, I never saw another. 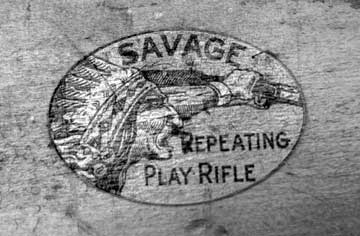 The original paper sticker has survived on our gun all these years later. 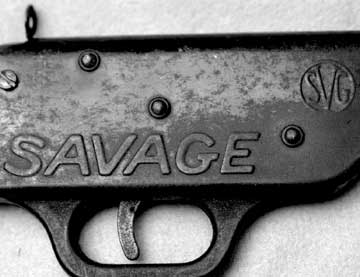 The Savage name is all over my gun. The right side of the receiver has both name and company logo in raised letters.

At Little Rock, Richard Schmidt had this beautiful example on his table.

After I purchased this one, though, I saw another at the 1998 Little Rock Airgun Expo on the table of collector Richard Schmidt. His was in almost-new condition, obviously having never been played with. Mine is rougher, showing lots of use but no real abuse. The one thing both these examples have in common is the original Savage paper sticker on the right side of the butt. The one I saw at Carlisle had no sticker.

This ad by Abercrombie & Fitch is for the Savage toy gun, which they call a Fox. Note construction of the foam “shot retaining target” at right.

Jim Buskirk, who publishes the Toy Gun Collectors of America newsletter, sent me a package of info that included an Abercrombie & Fitch ad for this exact gun. That ad said the gun was sold both as Savage and as Fox. The ad refers to the gun as the Fox model 31, although the drawing in the ad itself clearly shows the Savage name on the side of the receiver. It also says the gun is designed to shoot red wooden balls that are 3/8″ in diameter, and the power is supplied by the mainspring alone. They go out of their way to make the distinction that this is not an airgun–perhaps to soothe parents who might think that it is based on the general size and construction. The price was $3.00–not altogether different from what a low-end BB gun would cost in that era.

I bought a package of 3/8″ balls based on this information, hoping to chronograph the gun. But the balls I got are slightly too big for the barrel. So, I’ll estimate the velocity at around 50 f.p.s., based on the norm for straight catapult guns that use a coiled mainspring. I could be off a bit on the low side, but the range of the gun is given as 10-12 feet, so it isn’t much faster than that.

To load the gun: Place the butt on the ground, pull out the spring-loaded magazine follower and drop the balls into the hole (arrow).

The gun is loaded through a round cutout in the bottom of the magazine tube, about midway up the barrel. In fact, what appears to be the barrel of the gun actually houses both the mainspring and the true barrel, which is only half as long as it looks.

Savage was real big on the safety of their cocking mechanism.

The slide handle must be held firmly forward in order for the trigger to release, just like on the Remington model 26. Even as old as this gun is, the safety device works perfectly–probably having been better designed than the rest of the gun.

Buskirk also sent the summer 1992 issue of his newsletter, which has a reprint of an ad for a cork shooter that looks very similar, though not identical, to our subject gun. It’s grouped with another toy gun from Fox–the famous double barrel that takes spring-loaded shells that shoot wooden “bullets.” The implication is that the pump gun is also a Fox. It differs in shape somewhat from the one I have, plus it holds only 5 balls; and they’re cork instead of wood, but it might very well be a version of my pump gun. They were sold for $2.93 by Montgomery Ward & Co.

Both ads include a target with the gun. The Abercrombie & Fitch ad has what looks like a foam target face, and they refer to it as a “shot retaining target,” so I assume the foam would part to hold the ball by friction. It seems to be divided into small “fingers” to do just that.

Buskirk added in his letter that he felt Savage might not have been the actual manufacturer of the gun. He based that on the fact that Savage, as a firearms manufacturer, would not necessarily have the experience or tooling to work with folded metal.

What he says makes sense, but the top of the gun is stamped with the following: SAVAGE PLAY RIFLE MANUFACTURED BY SAVAGE ARMS CORPORATION, UTICA, NY. PATENT APPLIED FOR. If they didn’t make it themselves, why word it that way?

As far as I know, Savage, Smith & Wesson, Winchester, Johnson, Remington and possibly Sharps are all American firearms manufacturers who have made toy guns or airguns at one time. When I include Winchester, I don’t mean the German Diana models they imported in the ’60s and ’70s. I refer to the two beautiful prototype BB guns that are in Mike Burleson’s collection.

Did other U.S. firearms makers ever make airguns? Perhaps the blog readers might like to contribute to a search of the literature to help answer this question. We know that Daisy, Sheridan and Quackenbush made firearms. Were there others? Time will tell.

Thanks to Alan Johnson and Jim Buskirk for their contributions to this story. 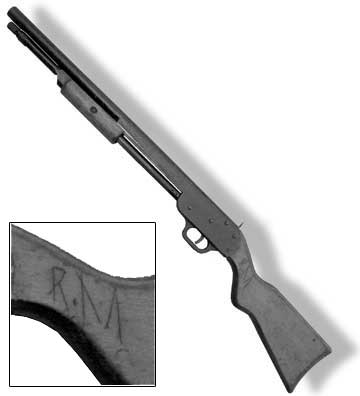 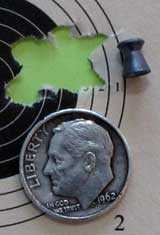