A real BB gun
At the SHOT Show this year, I was surprised in the Umarex booth by the appearance of a BB gun that looked for all the world like an airsoft automatic electric gun (AEG). One big clue that the HK MP5-K PDW is not an airsoft gun is the lack of an orange muzzle, which is required by law for all airsoft guns sold in the United States, but is not relevant to BB guns.

Let’s be clear about the definition of a BB gun right now. I am talking about a gun that shoots steel BBs — not the 6mm plastic balls that Asian manufacturers call BBs. Those guns are airsoft guns, not BB guns.

And this definition matters when unknowing parents and their children are buying and using these products, because it’s extremely dangerous to use a true BB gun like this one in a skirmish, where participants shoot at each other!

Specifications
The MP5 K-PDW is a copy of Heckler & Koch’s 9mm machine pistol, or what is commonly referred to as a submachine gun. The “K” designator stands for kurz, which means short, in German. So, this model is a shortened version of the gun. And, there’s a civilian version of the MP5 that offers semiautomatic fire only. While it looks the same as a full-auto gun, there’s only one shot per trigger-pull. That’s what has been incorporated into this BB gun, as well. [Thanks to blog reader “HK,” we’ve corrected the typo of the German word!]

Semiautomatic only
You cannot “spray and pray” with this BB gun like you can with a full-auto AEG airsoft gun. Instead, you shoot one shot each time the trigger is pulled. The letters PDW in the name mean Personal Defense Weapon, which connotes a legal-to-own semiautomatic version of a gun that’s normally restricted to licensed ownership, only. Actually, for U.S. use, the gun also must have a barrel that’s at least 16 inches long because it has a shoulder stock. That special model of the gun is designated the HK 94 and is not easy to find. The FBI also ordered a special semiautomatic variation of the MP5, which was labeled the MP5SFA2. SF stands for Single Fire, but of course their gun was not restricted to a 16-inch barrel and could be made in a more compact size. Single fire refers to semiautomatic fire, in which one pull of the trigger results in just one round being fired.

An MP5 firearm is a chunky beast that puts a lot of steel in your hands. It may be called a machine pistol, but it feels far more like a rifle when you actually hold one. And, since it shoots the mild 9x19mm Luger round, the recoil is not great. I’ve shot MP5s at legal machine-gun ranges several times, and they’re very easy to manage in the full-auto mode. Of course, a BB gun should also be easy to restrain, as well, only this one has a blowback feature, so there will be some movement when the gun is fired.

The stock swings out from the right side of the gun and locks solidly in place. The pull of the extended stock is a reasonable 13.5 inches, but the rear sight notch is positioned too close to your sighting eye, which will make precision sighting difficult. I have to pull my neck back to allow a few extra inches so I can even see the rear notch. I like the H&K aperture rear sight better, for this reason. The rear sight is a drum with multiple notches around its top, but it cannot be adjusted in either direction. The front sight is a simple post inside a narrow globe and it also does not adjust. 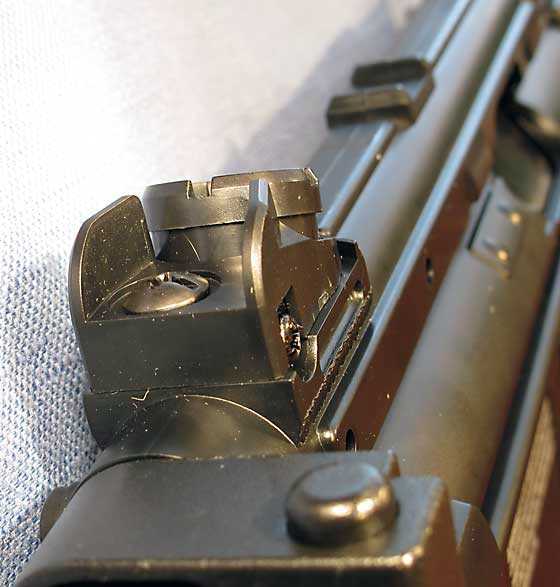 The rear sight is a notch, but should be an aperture when located this close to the eye. It doesn’t adjust.

This BB-shooting version weighs just over one-third what the firearm weighs, so it’s light and manageable. The bulk of this gun is rugged plastic, with metal parts used where necessary. That make it light. Since I haven’t fired it yet, I can’t comment on how the blowback feels; but as light as the gun is, I’m expecting to feel some realistic movement.

The curved magazine holds up to 40 BBs, which is only 10 more rounds than the firearm carries. So, the loading interval should be very realistic. I remember when I was shooting the firearm how sore my thumbs became from loading the mags and how quickly the cartridges were consumed by full-auto fire.

Installing a CO2 cartridge
To install and remove a CO2 cartridge, the stock must be pulled off the gun. The owner’s manual is of very little help in this procedure, as it refers you to a tiny photo showing two black plastic stock pins with red circles around them. I have made several larger photos of the pins and will give you more detailed instructions.

First, unscrew the piercing pin screw all the way. Then, remove the buttstock by removing the two plastic stock retaining pins.

The manual clearly says to use a plastic pin punch to remove the pins, though there are no pin punches included with the gun. However, I discovered that the back of a Bic pen will do the job perfectly. Just push the back of the pen down on top of each pin, and the retaining wires will be pushed out of the way. The pins can then be pulled out on the left side of the receiver. They’re captive and do not have to be completely removed from the receiver for the stock to be removed. 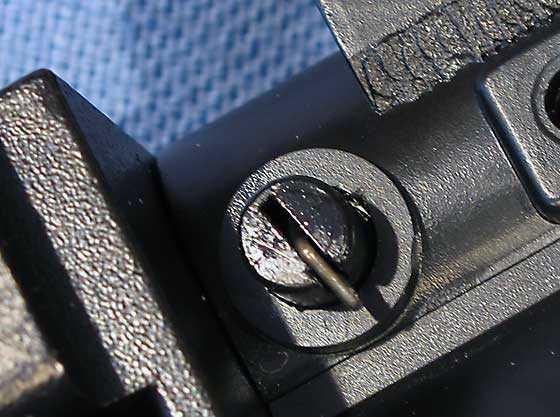 Both stock pins must be removed to pull the stock for installing a fresh CO2 cartridge. Each pin has a wire retainer in its center that holds it in place. The shape of the wire allows it to move out of the way when pressure is put on the end of the pin. 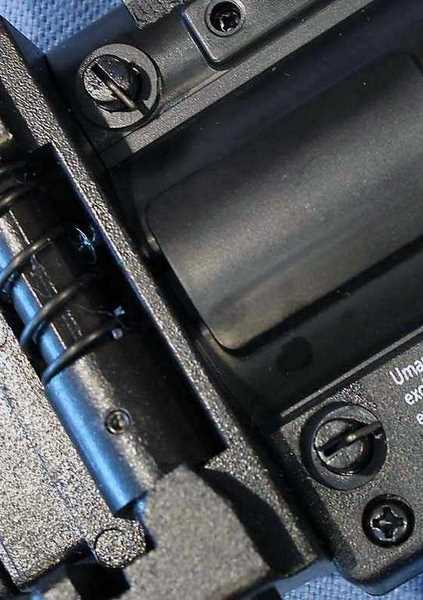 There’s a pin at the top of the stock fixture and one at the bottom. Both must be pushed out to the left side of the receiver. 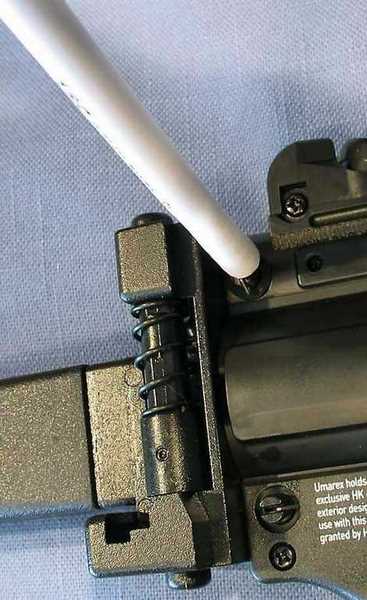 You don’t need a special tool to remove the stock pins. Just press in on them with the end of a pen and they push out easily. 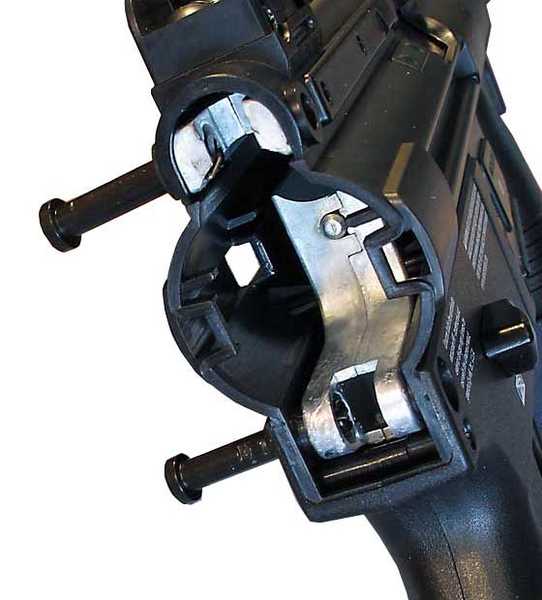 The stock pins are captive and do not have to come all the way out of the receiver. 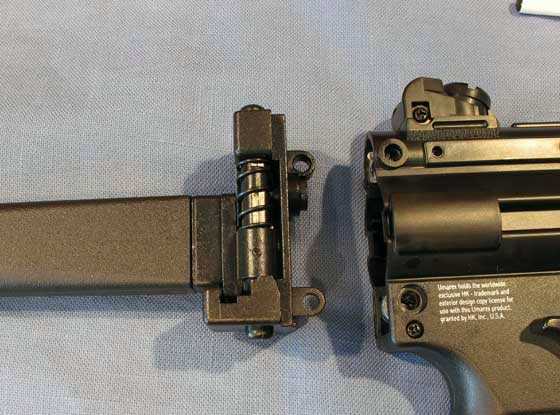 Once the pins are out of the way, the stock comes off like this. Then, the CO2 cartridge can be installed and the stock replaced.

To get the pins pushed back in the gun, you may have to tap them with a plastic mallet or a piece of wood. The wire retainers need to be coaxed back into the center of the pins before they’ll enter their respective holes in the stock.

While this sounds like a drawn-out procedure, it takes longer to explain than to actually do it. After the first time, you’ll be replacing cartridges in less than a minute.

Many of the switches and controls are either cast solidly into the plastic body of the gun or are dummies. The cartridge follower that’s located on the front left of the receiver, for example, is a spring-loaded steel part that moves in its track and can be locked in the rear position but has no real function to serve.

The two-position selector switch can be set to either fire or safe. On safe, the trigger is disconnected from everything and just moves in an arc. When the switch is set to fire, the hammer is cocked and released with every shot. 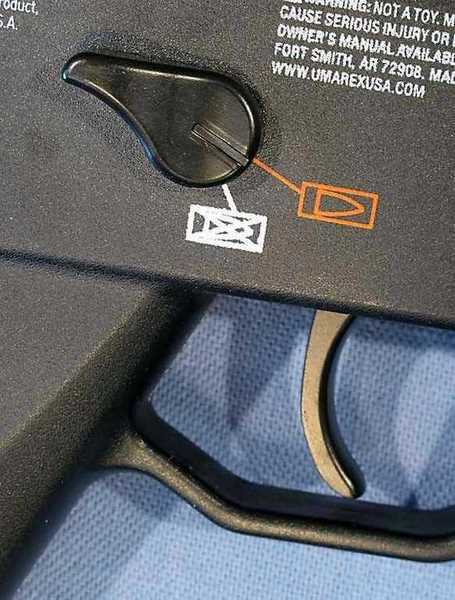 Two settings: Fire and Safe. Fire is semiauto, only.

We’ll look at velocity and shot count next. I’ll chronograph the gun with both Daisy and Crosman BBs to see if there’s a preference.

SAFETY WARNING
Parents, this is a BB gun that shoots steel BBs. Do not mistake it for an airsoft gun. It is not meant to serve as a skirmish gun, where players shoot at one another. The velocity of this BB gun coupled with its small steel ball projectile (the BB) makes it very dangerous. It should never be fired at a person or animal for any reason. Also, steel BBs can rebound from hard surfaces with great velocity.