Update on Tom/B.B.: (This is from Tom. He dictated this from his hospital bed this past weekend.) Well, I’ve been entertained a lot in the past 2 weeks in ways you couldn’t possibly imagine! As it turns out, when you get into the second half of your life, your reaction to general anesthesia leads to very bizarre mental behavior. It’s called Sundowner’s Syndrome, and it can be quite entertaining. When I went for my gallstone removal procedure, it was a success, but I didn’t come out of the anesthesia for 4 days. When I finally woke up, I was laying on my back looking at the ceiling. A green laser “X” symbol appeared on one side of the ceiling and 3 symbols that looked like alien lettering appeared on the other. As I watched this, I was asked this question: “Which one of these 2 is colder?” It was like a test for a college course I never signed up for and didn’t even know existed. My reaction was pretty quick. I think quicker than they anticipated because I threw some nurses around the room because I panicked and had to be tackled by a male nurse. What happened after that is a mystery, but I awoke in a tall skyscraper room 3 days later. The room was in an office building in Edmonton, Alberta, Canada, and it was run by French terrorists. A voice asked me, “Where do you think you are?” I said, “I know where I am. I’m in Edmonton, Alberta, Canada.” And the voice replied, “No, you’re in Texas.” And I thought, “where in Texas do they have skyscrapers this tall? Must have been some place in Dallas.” But, no, I was only on the second floor of the Huguley Memorial Medical Center in Burleson.

I can’t give you an explanation as to why I got the facts so jumbled, but this is the humor that is called Sundowner’s Syndrome. One of the nights after that, I was given a very special “knock you out and drop you down” sleeping pill that allowed me to hear conversations in another building a mile away and actually see and pass things from myself to these people who were talking. The one person I remember was Larry The Pirate–the same one seen in the movie Dodgeball!

What I’m saying is that my cognition has not been absolutely 100% the past couple weeks. At times, it bordered on a Picasso. I have plenty of other stories that will have to wait until the darned bugs stop crawling on my window shade. But that’s not why we’re really here. I want to talk to you about a rifle I tested recently.

Pyramyd Air sells the Stoeger X5 with either a wood stock or a synthetic stock. You can get the rifle with or without a 4×32 scope.

The Stoeger X5 is a real nice youth spring rifle. I’m not going to get into a discussion of whether or not this rifle is better than the Bronco or even how it compares. Just take my word that it’s just one more excellent youth rifle to add to a growing list. Yes, it’s Chinese, and yes, we know that to be in the price group the gun has to be made in China, Turkey, Mexico or Spain. But, the Chinese have proven that they can do wonderful work when they want to, and the Stoeger X5 is an example of that.

Wow!
Whenever that’s the first observation I make when testing an entirely new airgun line, I know things are going to be interesting. I’m looking at two of the four models Stoeger makes–the youth model X5 and the screaming X50 at the top of the line. All four models, which include the intermediate X10 and X20 rifles, are spring-piston breakbarrels, making them the salt of the airgunning earth. No technological surprises–just simple shooters. Today’s blog is about the X5. I’ll do the X50 on Tuesday.

A youth rifle…for shooters of all ages
I have a soft spot in my heart for youth model air rifles–not because I like kids more than the next guy, but because youth models are easy to cock and can have the smoothest-shooting powerplants of the entire spring-gun world. Those two attributes have been all but lost in the horsepower race that’s been ongoing in the spring-piston class for the past three-plus decades. But, at the end of the day, those two things are what make airgunning a rewarding pastime.

The first thing I did after taking the Stoeger X5 from its box was cock and load it and fire it into my office pellet trap. I prayed that it wouldn’t go buzz with the rattle of an ill-fitted mainspring and piston. Well, it didn’t! In fact, it didn’t buzz at all. It shot with a solid thunk that usually costs an extra $100 to $250 to achieve through an aftermarket tuneup. The only other air rifle in the world that shoots this smooth right from the box is the Air Arms TX200, which costs over $550.

Hence the “Wow!” To paraphrase the movie Jerry Maguire, “They had me at the first shot!”

The X5 is a large youth rifle, and that’s good, because a lot of the “yoots” who shoot it will be on the sunset side of 50. The pull measures a manly 14.25 inches, and the weight of 6.5 lbs. (scoped) is just right for an all-day shooter for just about anyone over 12. The overall length of 40.50 inches seems short, but the wood stock is thick and proportioned as an adult rifle. (I tested the wood stock only, but I assume the synthetic stock has the same dimensions.) What we have is a great compromise of adult size with a youthful ease of cocking.

Cocking effort is a mere 18 lbs. I rate all guns that stay under 20 lbs. as youth-ready, because that’s what it takes to pump a Daisy 853 target rifle, which is meant for youth competition. Guns this easy to cock can be shot hundreds of times in succession without feeling the strain. And for the 12-year-olds who want to shoot it, the X5 should be well within their capability.

There’s no anti-beartrap mechanism, so the X5 can be uncocked manually. Just restrain the barrel (which you should always do with a breakbarrel spring rifle), take off the safety off and pull the trigger. The barrel can then be safely brought back to the closed position and the rifle is no longer cocked. 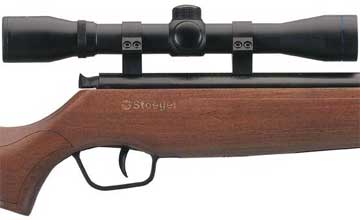 Sights
Though the X5 has a nice set of adjustable fiberoptic open sights, my test gun also had a 4×32 scope and a 2-piece mount. This one comes out of the box ready to go, and they’ll like that in Oshkosh. I focused the ocular lens for a sharp image at 25 yards. 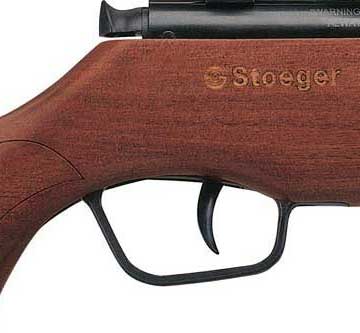 A heavy trigger is one of the few drawbacks on this otherwise-great youth rifle.

Heavy trigger
The X5 is a delight to shoot, except for an overly hard single-stage trigger. My RCBS analog trigger-pull gauge goes up to 8 lbs., and it’s possible to interpolate another pound–so 9 lbs. is the limit. The non-adjustable X5 trigger breaks at about 8.25 lbs. I think that’s too heavy for kids and even I had difficulty controlling the rifle for the best possible accuracy off the bench. We’re going to have our kids learning to pull triggers with two fingers if we give them guns with pull-weights this high.

Power
This is a youth rifle, so we don’t expect high velocity. In fact, it’s the lower power level that makes the gun feel so stable. Gamo Match wadcutter pellets averaged 607 f.p.s. at the muzzle, and the spread for 10 shots was from 596 to 619. RWS Club pellets weigh 7 grains and average 622 f.p.s., with a spread from 610 to 628. These numbers put the X5 on the fast end of youth rifles. Muzzle energy is just over 6 foot-pounds. 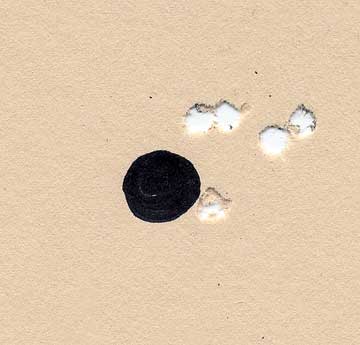 The X5 shot very well. This 5-shot 25-yard group with Gamo Match pellets is well under one inch (target has been enlarged).

Good accuracy
After overcoming the trigger, though, I found good accuracy at 25 yards. Because the X5 is a breakbarrel, it’s extremely hold-sensitive, so I had to use the artillery hold to let the gun recoil as much as possible when firing. And, of course, I did not allow any part of the gun to touch the sandbag. Laying the forearm on the flat of my open palm, it was possible to shoot five pellets into a group smaller than one inch. The smallest group measured 0.807 inches, center-to-center of the two widest shots. Given the heavy trigger I was fighting, I call that a great showing.

The bottom line
For less than $140 scoped, the X5 isn’t the cheapest scoped air rifle by far. It’s about $40 above some of the bargain-basement name brand combos. I think it’s worth it, though. I don’t buy airguns on price any more than I do firearms. First, they have to work properly and be accurate; then we look at the sticker. The X5 is well worth a look.