To continue with my discussion of what it’s like to be in the hospital as an old guy, let me tell you another interesting fact of the Sundowner’s Syndrome. For over a week, I was angry because the patterns in the acoustical tiles of all my rooms were poor advertisements for used gear that somebody was trying to sell. It wasn’t until this week that I realized that was more Sundowner’s Syndrome. I was reading into the pattern. That’s why each individual panel has the same lousy stuff for sale. For instance: “2.5 hp pump, needs paint & rings, $18.” I was very angry that the hospital had allowed itself to be duped by construction workers who wrote their cheap ads into the acoustical tile panels of every room. It wasn’t until last week that I realized they weren’t messages at all–just random patterns that my brain was translating. Now, how the heck could I do that and yet not read the 3 alien symbols (see yesterday’s blog) from the first time I woke up? Yup. Gettin’ old is for the birds!

However, there’s an up side. After 10 days, I finally caught up with myself and realized that I hadn’t had a shower. So, I asked for the one and only sponge bath that I can remember. Edith tells me they gave me several. However, I can only remember one because it was so memorable. Two female nurses were wearing gypsy costumes that they totally wet down and did a wild flirtatious dance that covered me with soap and water. Somehow, their clothing dried off quickly and they dried me off quickly, too. I suppose the truth of the matter is that they were actually washing me with washcloths and drying me with towels. But, in this case, I like my interpretation better.

Of course, the flip side of staring at the ceiling for 18 hrs a day is that whenever I looked away, I could see things crawling, flying and moving. It seems that there was an insect infestation on every wall. The doctor told me that bugs are a pretty common Sundowner’s hallucinations.

The Stoeger X50 comes with or without a 3-9x40AO scope with a 1-piece mount. The synthetic stock has dual cheekpieces and is either black or REALTREE Advantage Timber HD camo.

Yesterday, we looked at the Stoeger X5 air rifle–a great youth rifle. Today, we’ll look at the opposite end of the spectrum and examine the Stoeger X50, which is a magnum springer.

The X50 is huge! A Winchester model 70 is petite by comparison. It weighs 10.5 lbs. with the scope installed in the combo package I tested, and it cocks with 43 lbs. of effort. The pull measures 14.75 inches and the overall length is 49.75 inches, making it significantly longer than 95 percent of all centerfire rifles. Make no mistake–this is a man’s rifle; and I don’t care how big and strong your 14-year-old son is, he’s going to feel this airgun and so are you.

If you select the scoped model, you’ll get a real nice 3-9x40AO scope. All models come with fiberoptic sights.

The combo package I tested comes with a nice 3-9x40AO airgun scope. Because it’s an airgun scope, it’s rated for the sharp forward lunge of the rifle at firing. It also adjusts for parallax down to 10 yards.

This big rifle also has a nice set of fiberoptic open sights on it and is available without the scope. The rear sight is adjustable for both windage and elevation, and should please those shooters who don’t want optics. 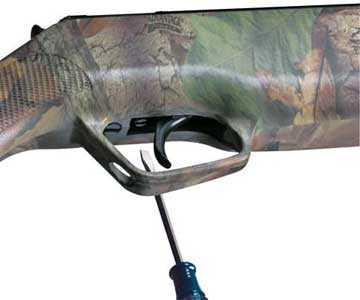 Unlike the Stoeger X5, the X50 has a trigger that’s adjustable for second-stage pull.

Trigger
The X50 has a two-stage trigger that adjusts for the length of the stage-two pull. Pull weight does not adjust. Stage two is very long and creepy, and you cannot feel the end of the stage. You just keep pulling until the trigger breaks. The trigger on the test rifle broke at 5 lbs.

Power
The X50 is advertised as capable of 1,500 f.p.s. with non-lead pellets. No one in their right mind would shoot it that fast because accuracy would suffer, so the safe bet is to use heavier pellets. Whenever I encounter a .177 that’s too fast, I always reach for Beeman Kodiaks. These are 10.6-grain domed German lead pellets and also sold by the manufacturer as the H&N Baracuda.

Just to test the advertised velocity of 1,500 f.p.s., I also shot a string of Crosman Silver Eagle hollowpoints. This 4.8-grain lead-free pellet is the fastest real pellet I have seen in .177 caliber. There’s a 3-grain English plastic pellet available for bar bets, but nobody takes it seriously. Silver Eagle hollowpoints averaged 1,364 f.p.s. and ranged from a low of 1,312 f.p.s. to a high of 1,390 f.p.s. That’s a huge velocity spread; but because the pellet also breaks the sound barrier, it’s a moot point. They cannot be accurate in this rifle. 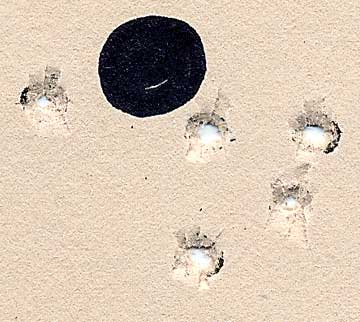 Using lead pellets, you’ll get the best accuracy possible from the X50. This inch-size group (target has been enlarged) at 25 yards is very acceptable.

Accuracy
With a good artillery hold, the X50 placed five pellets in a group measuring 1.029 inches at 25 yards shooting off a rest. That was with the Beeman Kodiak pellet I predicted would do well. Actually, I got several groups of Kodiaks under 1.25 inches at 25 yards, which is indicative of an air rifle that wants to shoot. Remember to hold the rifle as loosely as possible and never rest it directly on anything except your hand. This is a breakbarrel and has to be held right or accuracy will suffer.

Summing up
It’s not “just as good as” or “a great substitute for.” The X50 stands on its own merits and deserves to be evaluated that way alone.