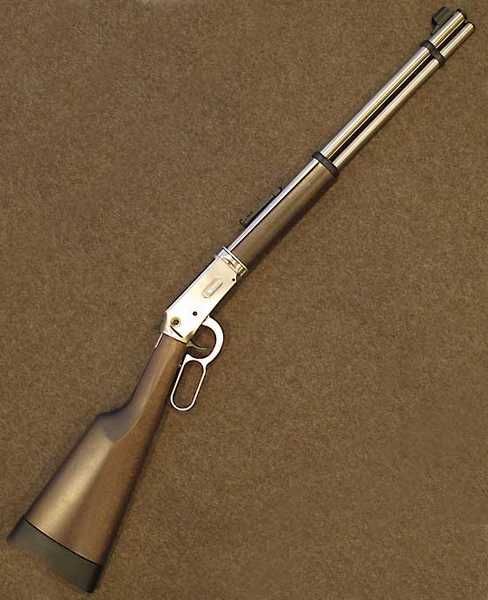 Welcome to the new Walther Lever Action CO2 rifle. Walther brought out the Lever Action CO2 rifle back in the early years of this century, and I learned about it about half a year before it hit the market. Wulf Pflaumer, the owner of Umarex, was visiting his sister in Maryland, and I had a chat with him about airguns in general. “What would you think,” he asked me, “of a lever-action pellet rifle that looks and feels like the Winchester 1894?”

I thought it would be a world-beater at the time, and many who purchased that first release model felt as I did, that the realism, accuracy and build quality were right where they needed to be.

That first rifle was an 8-shot repeater with a slick-as-grease action. And it was as accurate as promised. Five pellets would stay on a penny at 20 yards. What more could you ask of a western-style repeater?

Well, gas economy turned out to be the answer. Even that’s too pat an answer, because it wasn’t the number of shots per CO2 cartridge that bothered some folks. It was the constant need to change them because they were shooting the gun so much. When a gun goes through pellets as fast as you can flick your wrist, you notice all the downtime involved in changing the two 12-gram CO2 cartridges. Everytime a change was required, you had to fumble with a Rube Goldberg contraption that housed two cartridges in tandem in the butt, and people may have resented the complexity of that system.

Well, things just got better, easier and faster with the introduction of the new Walther Lever Action, because instead of two 12-gram cartridges this one takes a single 88-gram cartridge that will last many times longer. And, instead of the cumbersome mechanism that held both 12-gram cartridges in the first model, in this one the big cartridge simply screws into a hole in the butt. There’s no fuss or mechanical contraption to deal with.

I asked for the nickel-finished rifle for this report, just to change the pace a little from the black one. My old-style Walther Lever Action carbine has a traditional black finish and I wanted to see how different this one looked. The bright finish does add cost to the price, though, so consider that when buying.

A blast from the past
Of course, the Walther Lever Action is a mimic of Winchester’s famous 1894 lever-action rifle. No other single rifle epitomizes a hunting firearm to the extent the 94 does, and when you see one you automatically think .30-30, even though they have been chambered for many different cartridges. 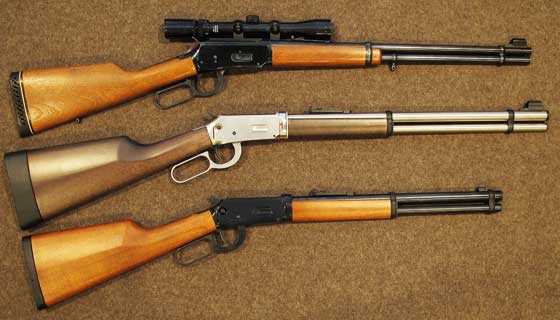 Winchester model 94 at top, Walther’s new Lever Action rifle in the center and the old model Walther Lever Action carbine at the bottom. Notice the pull of the new Walther is longer than the Winchester’s pull.

Edith and I were in a local gun store one day when she spotted a post ’64 Winchester carbine that had been scoped. She wondered if it would make a nice contrast to the Walther’s Lever Action carbine we own, so we bought the rifle and have been waiting for this day to arrive. The Walther is designed as a fast, accurate plinking rifle for warm weather (being powered by CO2), and that’s how I plan to test it for you.

New tools for the rifle
With the rifle, you get two new tools that won’t be familiar. One is just a fancy screwdriver to remove the thick plastic buttplate for access to the hole in the stock where the CO2 cartridge goes. The other is a fancy wrench to tighten the cartridge the last few turns, causing it to puncture and start the gas flowing. In fact, due to the threads on the cartridge, these new rifles are much faster to charge than the old model that used the two smaller cartridges. And because the threads draw them into the piercing pin, the length of the cartridge isn’t of much concern as it is on some other rifles. 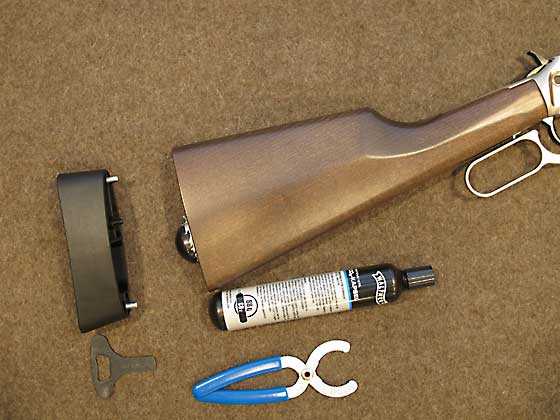 A single screw detaches the buttplate from the stock. The black key below the plate is used for that job. The blue-handled wrench tightens the 88-gram cartridge in place. The whole job takes 15 seconds. Don’t forget the Crosman Pellgunoil on the tip of each new cartridge!

I’m not even going to attempt to count how many shots you’ll get from one cartridge, because it should number in the hundreds. And, when you’re done shooting, just leave the cartridge in place until the next time. As long as you use Crosman Pellgunoil on the tip of every new cartridge, the gun should remain tight for years.

How do you know when the pressure is running low?
You can clearly hear that the gas pressure is low in the report of the gun. At the first indication that pressure is dwindling, stop and remove the cartridge. Don’t risk getting a pellet stuck in the barrel.

Where do the pellets go?
To open the pellet clip, press in on the front of the cartridge loading gate, which is the same configuration as on the rifle. The pellet clip will pop out to the side of the receiver, where it can be exchanged for a loaded one. 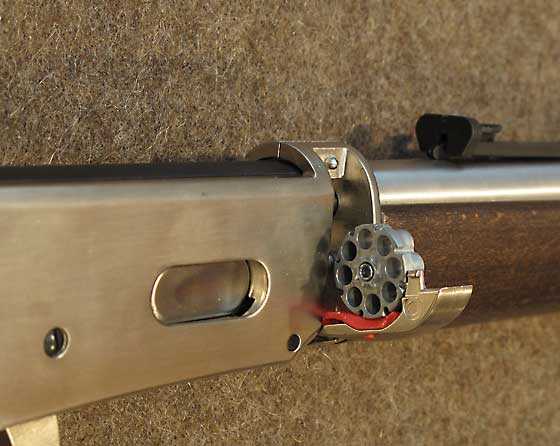 Push in on the cartridge loading gate, and the pellet clip pops out to the right for access.

General specs
This rifle is an 8-shot lever-action repeater and delivers 600 f.p.s. velocity. Given the number of lightweight pellets on the market today and the 18.9-inch barrel on the rifle, I would guess both numbers are conservative. The rifle weighs about 6.2 lbs. and the stock and forearm are real hardwood. It’s very attractive, especially in the brushed nickel version that I’m testing. The length of pull is a manly 14.5 inches; and, despite the gas cartridge in the butt, the balance is very neutral. The overall rifle is 39.2 inches long.

The lever really does cock the hammer and advance the clip to the next round. The action is smooth and easy — much easier than the firearm that it copies. However, you do have to keep track of your shots because the action continues to operate when the pellets are gone. 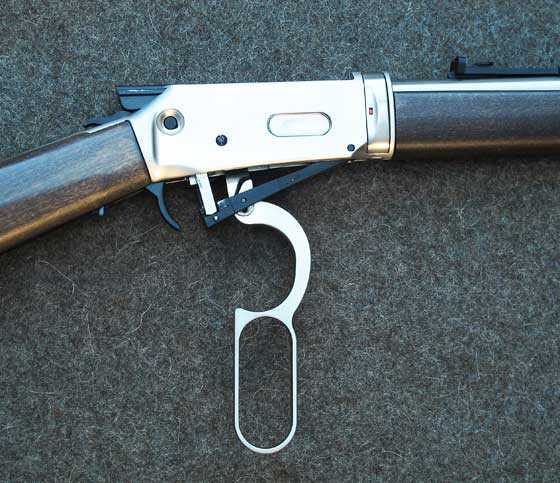 The lever works the action just like the firearm, only it’s a lot smoother and easier.

Price
Okay, the price on this one is high, but let me tell you a little story about that. Back in the 1980s when Beeman brought in about 100 Erma ELG-10 lever-action single-shot pellet rifles, they charged $300+ for them and the shooters avoided them like the plague. They never ordered another batch because the rifles just didn’t sell. Today, they command over $600 when they come to market. These Walthers are very much like the ELG-10s, except that these are repeaters, they’re more realistic-looking, more accurate and more powerful. Get ’em now while they’re hot, or wait and pay double in the future. As a plinking air rifle, they don’t come much better than this.

Speaking of plinking, I don’t think that I’m going to test this rifle with a scope. This is a plinker, and that’s how I’ll test it for you. The sights are somewhat adjustable and quite nice for a plinker. The rear sight adjusts for elevation and the front for windage. I’ll go over them in greater detail in the accuracy test.

The trigger is two-stage and non-adjustable. Stage two is quite crisp, so it should help with accuracy. All in all, this is a great Western air rifle.