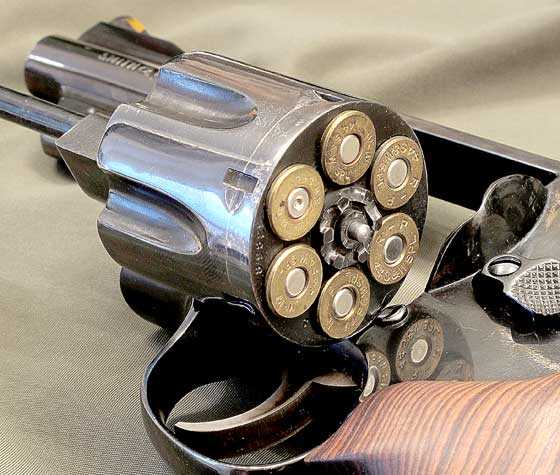 Last week, the NSSF (National Shooting Sports Foundation…they put on the SHOT Show) sent out a notice that said the number of new shooters is on the increase. That’s hardly news, except for the implications. Where are these new shooters getting their training?

For years, I’ve railed about the author Agatha Christie talking about putting the safety catch on a revolver in her novels. Any shooter can tell you that the number of revolvers that have safeties (not safety catches, but that’s another rant for another time) is extremely low. Revolvers do not have safeties, as a general rule, and the few that do are true oddities in the world of guns.

But that’s just the tip of the fiction writers’ iceberg of ignorance about guns. As I was reading a mystery novel last week, the detective/hero found the murder weapon in the grass, near a pond. One cartridge had been fired — presumably the one that killed the victim. So, the hero got the police to start a search for the cartridge case that had fired it! That’s correct, they started a search for the single cartridge case that had been fired by this revolver!

When a cartridge is fired in a revolver it remains in the cylinder until the shooter extracts it. This is one reason revolvers are selected for murders — because they leave nothing hehind.

I would have thought they might have found it still in the cylinder since the cases remain there until the shooter manually ejects them. Instead, they called in divers to search the pond!

As you ponder that incongruity, here’s another one. In another book, a female private investigator working in the Chicago area didn’t carry a gun because, to use her own words, she didn’t need a gun to do her job. The female author went on to say that once the female PI had her life threatened, she decided to get a gun and was able to buy one without being subjected to the “normal waiting period” because she had her private investigator’s license. Not a word about what gun she bought or whether she knew how to use it. The reader was supposed to believe that, because she had her PI license, she was automatically able to use any gun she might acquire. Perhaps she had played a gangsta video game a time or two?

When I read things like this, I wonder if this what people think. Do they really think a person can pick up a gun and, because they’re in a certain field, they’ll automatically know how to use it? Writing things like this lays open a person’s soul, because it displays all the misconceptions they have concerning the field of firearms. First, firearms are not needed in a city like Chicago — presumably because of their fine police force, and next, that a piece of paper and a job title are all you need to know how to properly handle a gun. I don’t think its a huge leap for me to guess the writer’s politics when they write stuff like this.

In another mystery novel, I read that an Army military policeman who was a major was investigating a murder scene and found a single cartridge case laying on the ground. He picked it up and thought that it resembled a 5.56mm case, though he wasn’t sure. He also knew that a .223 Remington cartridge case would look the same. But he knew the brass in the 5.56mm case was thicker and therefore the case was heavier than a .223 Remington case. So, he felt the weight of the case to determine if it felt heavy enough to him to be a 5.56mm case. 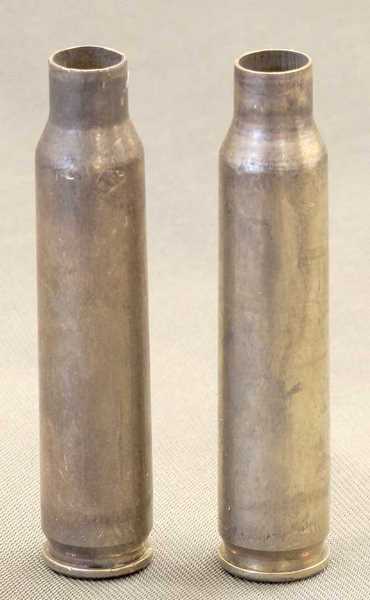 Two cartridge cases — one a .223 Remington and the other a 5.56mm Nato round. Their external dimensions are the same. Nobody can tell the difference just by holding them in their hand.

Then, he handed the case to the local sheriff, who did the same thing — felt the weight of the case and tried to guess whether it was heavy or light. A conversation followed about the construction of 5.56mm cases and .223 Remington cases.

Now, Wikipedia is a marvelous resource for those who already know a lot about their subject. But for those who are ignorant of the facts and cannot be bothered to do much beyond rewriting the Wiki entries to fit them into a murder mystery novel, it is sadly lacking.

By this time, I imagine most readers have already wondered why these two “experts” didn’t just look at the cartridge case headstamps that would positively identify beyond all doubt which type of case it was — 5.56mm or .223 Remington. Any cop in the world would know enough to do that as would most people who served in the Army — especially in the rank of major! 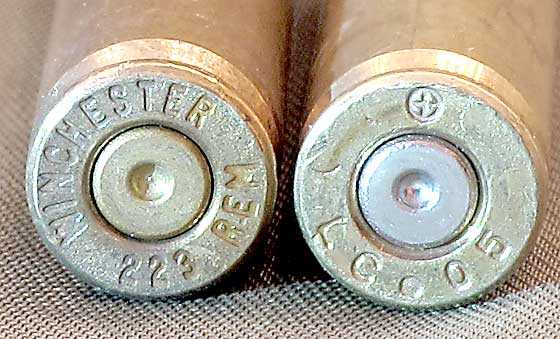 Cartridge on the left is a .223 Remington caliber made by Winchester. On the right is a 5.56mm cartridge made by the Lake City Arsenal in 2005. Duh!

I think it’s quite clear what’s wrong here. I read too many murder mysteries!

Seriously, what this reveals is the general public’s utter lack of comprehension about how firearms work. And yet, they’re coming into the shooting sports in increasing numbers. Who is going to train these people?

I welcome the influx of potential new shooters, but it also gives me cause to shudder. I have seen numerous groups of young men at the range shooting their 9mm pistols as fast as their trigger fingers can move. They stand 10 feet from full-sized silhouette targets, holding their guns in what they think is a Weaver stance, though I doubt any of them ever heard of Jack Weaver. I even saw one of them hold his pistol sideways with the ejection port pointed up toward the sky — a perfect Hollywood gangsta move.

Airguns are the ideal way for these new shooters to learn, but not if they think that a 2013 pellet rifle will just sting the same as a BB gun from 1900. There are so many things for these new people to learn, yet, because of their upbringing, they still view the NRA as a couple points to the right of Adolph Hitler. They haven’t been trained by the military, and so many families lack the gun-savvy fathers that were common in the 1950s.

So, who is going to train them? I simply do not know.