Happy New Year! Today is New Year’s Day, and I’m taking the day off. I’ll still watch the comments, but I didn’t write a new report for today. Tomorrow, however, I have a big surprise for you!

Remember that I originally wrote this report in 2005. I’ve updated the captions, but not the main text.

The Daisy Targeteer was on every kid’s wish list!  Daisy’s Targeteer was initially offered in 1937. It came in a cardboard box with the pistol, instructions, a metal tube of special shot (we’ll get to that in a moment) and spinner targets. The box converted into a backstop that held the spinners so they could be shot safely. All this cost just $2.00! 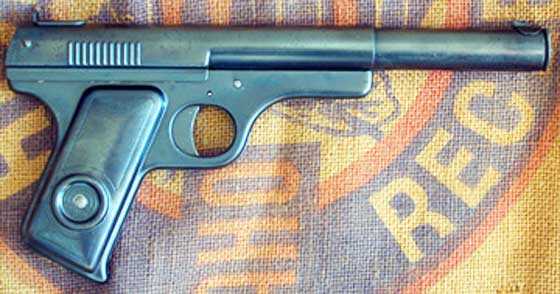 Daisy’s Targeteer pistol lasted many years and came in several versions. This is the earliest one. 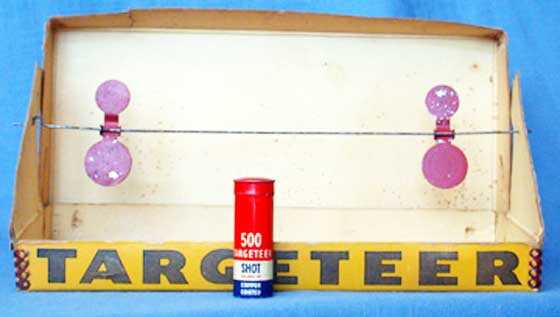 The Targeteer box doubled as a shooting gallery. Simple metal spinners reacted nicely when shot, and the BBs didn’t penetrate the cardboard lid that served as a backstop.

Special shot for a special gun
The Targeteer’s action is a spring-piston design that has to be the world’s weakest BB gun! Instead of shooting conventional steel BBs, it shot special .118-caliber (nominally called .12 caliber) steel shot that Daisy made just for this gun. If you read about the Sharpshooter rubber band catapult gun in my May 11 posting [2005], you’ll remember that they’re the same caliber as the Targeteer. The Sharpshooter shot traditional No. 6 lead birdshot that’s used in shotgun shells. The Targeteer’s ammo was steel! Only a company as large as Daisy had the resources to make a steel version of this shot! 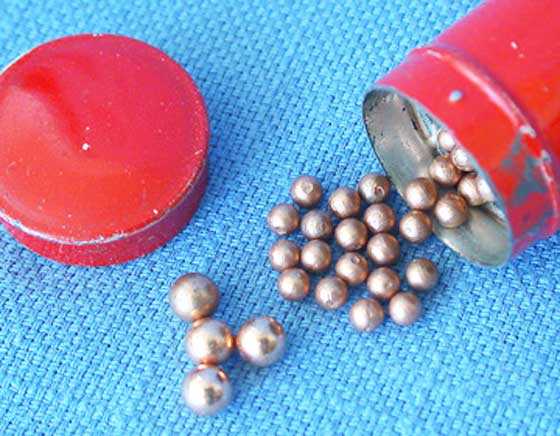 The Targeteer operates just like a conventional Daisy rifle in all ways but cocking. To cock it, pull the barrel back into the action. Most people simply pushed the muzzle back with the heel of their hand while holding the grip in their other hand, which means they’re cocking a gun with their hand over the muzzle!

Not a bang but a whimper
The Targeteer discharges with an anemic sound, much like a mouse coughing. When the piston jumps forward, the BB exits the muzzle at, perhaps, 100-150 f.p.s. Being very light as well as slow, the BB cannot break windows, lightbulbs or even one sheet of paper at a distance greater than 10 feet. That’s why the cardboard box was good enough as a backstop.

Even though this gun lacks power, it’s fun to shoot! The Targeteer lasted up to World War II, then resumed production after the war. Nickel-plated versions (often mistakenly called chrome-plated) were available after the war, as was a very pretty plastic shooting gallery model that housed the gun on top of the gallery when not in use. The gallery was only offered from 1949 through 1952 and is considered a prized Daisy collectible in its own right. 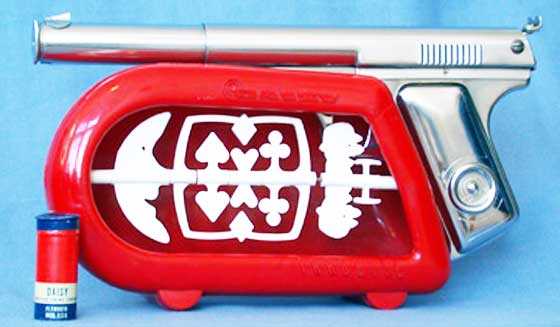 This Targeteer Shooting Gallery is an action target, a stand for the gun when its not in use and each foot stores one tube of BBs.

Targeteers are easy to find!
I find Targeteers all the time at flea markets, gun shows and airgun shows. A reasonable price for the first-version blued gun by itself in good condition with lots of blue and no rust is $60. Nickel-plated guns with lots of finish sell for $40 to $60. A Targeteer complete in the cardboard box sells for $100 to $150; the red plastic shooting gallery with gun goes for $200 to $300, depending on condition. The metal shot tubes bring $5 to $10; if you’re lucky, they’ll still have some copper-plated steel shot inside.