How to range-find with an adjustable parallax scope

I’m writing this report for a new reader — Ovid. As soon as I replied to his request last week, another reader said he wanted to know how it worked, too, which tells me there are couple thousand silent readers with the same question. So, let’s learn how to determine ranges with a parallax adjusting scope.

Why know the range?

Airgunners need to know the range to the target because of the arched trajectory their pellets follow. Where centerfire cartridges may drop 9 inches over a distance of 250 yards, an airgun can do the same thing in 60 yards. And some competitions like field target demand that the pellet pass through a small hole without touching the sides of the hole, or the target will lock up and not fall. So, we are not talking inches — we are talking fractions of an inch! Therefore, knowing the trajectory of the one pellet you shoot at all distances and knowing the precise distance to your target is critical.

Parallax adjustments on telescopic sights were never meant for determining ranges. They are not precise enough — I don’t care who makes the scope or how much it costs. They aren’t made for that purpose but they do work.

Parallax adjustments are also called adjustable objectives, or just AO on most scopes. That’s because you used to have to turn the objective lens on the far end of the scope to focus. Some scopes still work that way, but a lot of them now use a side adjustment knob or wheel that’s located on the left side of the scope’s turret. Having the knob there brings the adjustment closer to the shooter, so he isn’t holding a 12 pound rifle with one hand and reaching out as far as he can with his other hand to turn the objective lens. Given the length of the powerful scopes that have AO, this side adjustment feature is a real blessing! 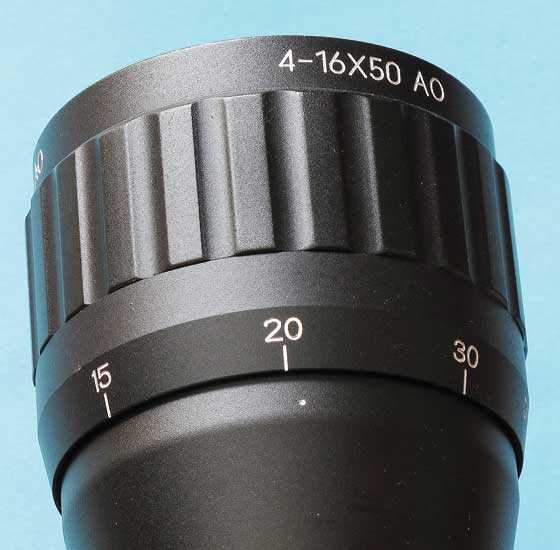 Looking down on the objective bell of a scope with an adjustable objective (AO), we see the distance markings in yards. 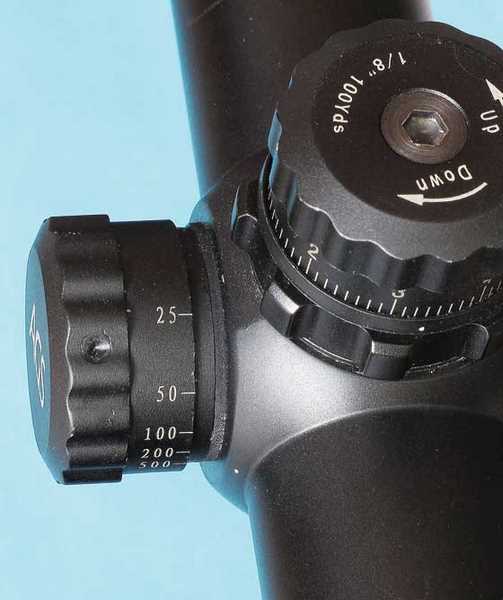 The knob on the left side of the turret adjusts the parallax on this scope. This placement of the adjustment is much easier to access than the end of the objective bell — especially on a long scope!

What you are doing when you adjust for parallax is focusing the scope at a given range — just like focusing binoculars that have a center focus wheel. If the optics are sensitive enough, this focal plane will be very narrow (short) at close distances, allowing ranges to be determined more-or-less accurately. So this feature does work as a rangefinder, but with limitations. Understand those limitations before you invest in something that may not satisfy your needs.

A few weeks ago someone commented that his scope was reading 175 yards for a target 75 yards away. That’s very common and all scopes do it. As the temperature changes, the lenses inside the scope and the metal cages that hold the lenses expand and contract ever-so-slightly. It only takes a few microns (millionths of a meter or thousandths of a millimeter) movement to change things to the point that the readout on your objective lens doesn’t correspond to the actual distance to the target being focused.

What scale is on the adjustment?

Another thing may limit the usefulness of the rangefinding capability of a scope is the scale of distance marked on the adjustment bell/knob. On some scopes, all the close yardages are crammed together on the adjustment bell or knob and it’s difficult to tell how far you have adjusted the scope. Is it reading 50 yards or 75? It matters greatly with a pellet gun — not so much with a high-velocity centerfire rifle.

Many years ago I advised Leapers to make the 10 to 50 yard adjustment range the biggest portion of the scale on their scopes, because that’s what airgunners want. They produced some scopes where 10 to 50 yards was three-quarters of the adjustment range of the AO, and 50 yards to infinity was packed into the remaining quarter turn.

The need for separation of the close distances is where the large optional sidewheel focus knob comes from. The larger the wheel, the greater the separation of the distances around its circumference. Nobody accepts the numbers that are engraved on the sidewheel (or objective berll) from the factory. Even if they were accurate, which they can only be by chance, they would reflect the temperature at which they were recorded, and you now know what a big deal that is.

Shooters place white tape around the circumference of their sidewheels, then on the range they determine exactly where the wheel is located at each distance. It is not uncommon to see sidewheels marked with every yard/meter distance from 10 to 50 meters, though I have found that the flat spot in the trajectory (usually around 20-30 yards) may be combined or broken into just a couple markings, because the pellet is traveling relatively flat.

The knob on the left of the turret adjusts the parallax distance. Think of it as focusing the scope. 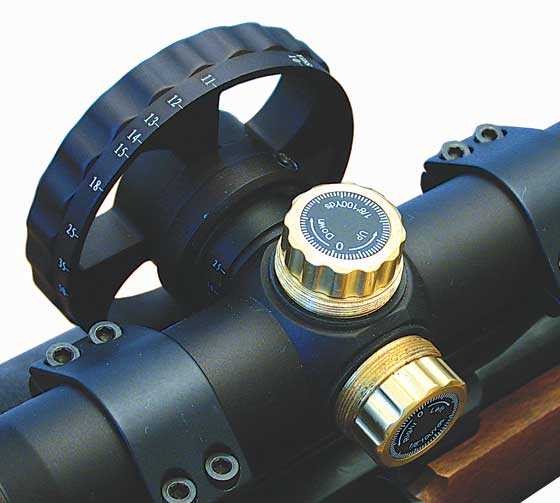 No doubt this UTG optional sidewheel looks large to the uninitiated, but it’s actually small. Sidewheels of 8 inches in diameter are not uncommon. That gives the greatest circumference around which to lay white tape for the actual yard markings.

THIS is the real reason field target shooters use scopes with such high magnification. They need to see small objects out to 55 yards, so they know when they have adjusted the focus perfectly. To see something at 55 yards clearly enough to be able to focus on it for rangefinding, you need at least 40 power, and more is better. But if the scope’s optics are marginal, like the optics on my $600 Tasco Custom Shop 8-40X56 from 1998, the scope becomes too dark at higher power to see things that are not brightly lit. My scope starts getting dark and hazy at 30 power. And where are most field target matches held? They are held in the woods! What you need is a powerful scope that is also bright.

That is why field target shooters are willing to pay thousands of dollars for top-quality scopes that are both bright and have extreme magnification. If only Meopta would make a field target scope! They know exactly how to get the maximum light transmission through a high-power riflescope. Ah — but try to convince anyone that an airgunner will pay $1,500 or more for a scope! They simply don’t believe it. That’s because they have never seen a $3,500 field target rifle before. There are hundreds of national- and world-class competitors around the world who are willing to pay. They already use the best scopes they can find. If something better came out, most would buy it.

Where does this leave the average Joe who doesn’t want to spend over $300 on a scope? Well, here is the deal. At 24 power you can see good enough to determine ranges out to about 35 yards if you have good eyes. You have to accept that your scope is only going to be accurate in determining distance within a narrow range of temperatures. If you set up the scale on the white tape that’s on the parallax adjustment knob at the same temperature at which the match is shot you’re home free. If not, be prepared to interpolate — regardless of how much your scope costs.

Below about 24 power the ability to determine distances is limited. I like a 4-16 power scope as much as anyone, but I also know it’s not a great rangefinding scope.

Do you need a range finding scope?

I can determine distances pretty well out to 50 meters. I said “pretty well” because at the 2016 Texas Airgun Show last weekend I set the arrow stop at 35 yards and had sighted my dot sight on the Dragon Claw for 25 yards. I was 10 yards off! Everyone who shot that Air Bolt system with me was hitting several inches low. Once we compensated by holding high, though, six different people put their arrows into three inches at 35 yards.

My point is, if you need to know the range to the target, using the parallax adjustment on your scope is one way to do it. Just know the limitations. 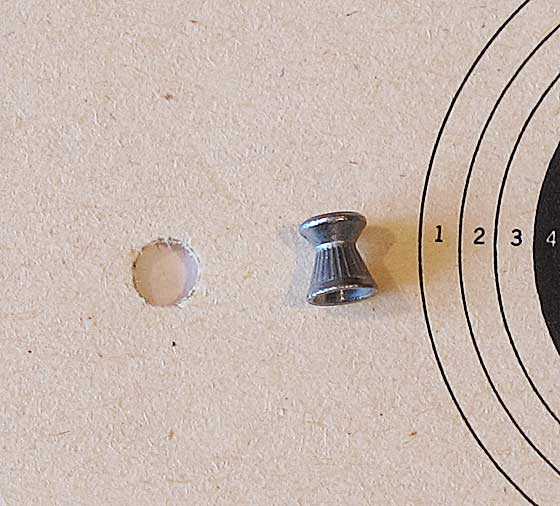 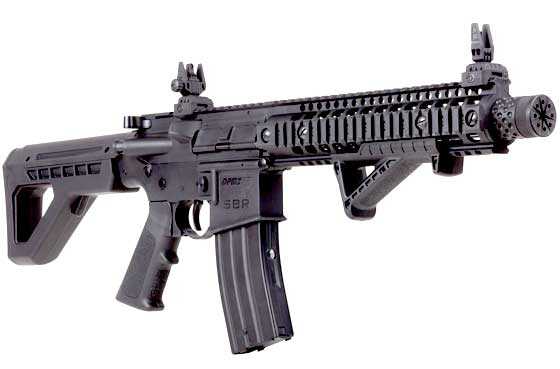 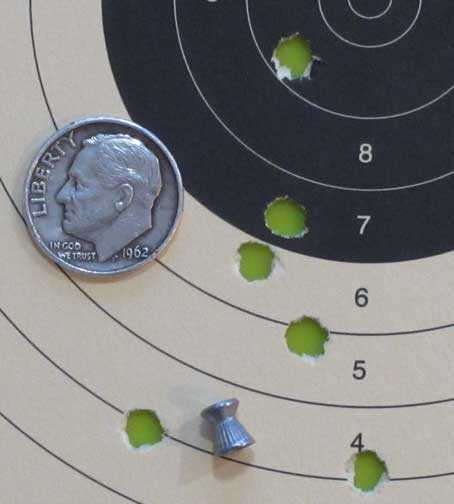